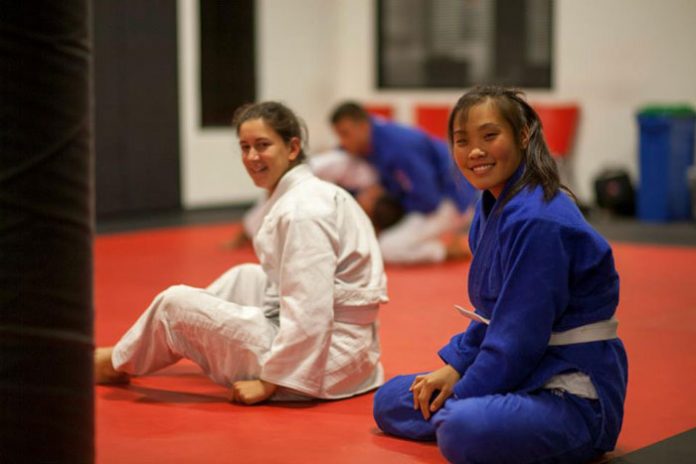 The people that have the hardest time training Jiu-Jitsu are beginners. There are not the people who have just shown up for class yesterday.  The first three or four classes do not count. Those are “orientation” classes, where people decide if they want to get destroyed or would rather train Tai Chi. Beginners are the people that consciously decide that BJJ is the sport they want to do. The person with the brand new Gi and a look of enthusiasm and terror in their eyes is a BJJ beginner. And the hardest part of the introduction to grappling is still ahead of them. That notorious first month of training is universally difficult for everyone. As far as Jiu-Jitsu for beginners goes, the most important help they can get si with getting through the first month of training.

the well-established phrase that all new beginnings are difficult doesn’t even begin to describe Brazilian Jiu-Jitsu. Taking up grappling is going to redefine what you consider as difficult. In return, it is also going to provide you with all the tools you need to solve the issues it presents. However, just like with everything else, you’ll need to learn about the tools themselves first. You’ll have to understand what your tools are, where they fit into the larger picture and, most importantly, how to use them. Until such a time, though, you’ll be left to practice with them and you’re going to make grave mistakes. Rolling is the epitome of tough love learning methodology, and there’s no way around it. A few tips on starting Jiu-Jitsu for beginners are all it takes to turn utter destruction into simple discomfort.

The main problem with new students is that they fail to listen to the important points. This is normal, given the change of environment they’re used to. For example, every advice you give beginners goes right out the window the moment live rolling starts. Instincts often lead them to wrong decisions making their experience on the mats even more dreadful. The one key Jiu-Jitsu for beginners tip is LISTENING. There are a few really solid pieces of advice you can get, you just need to listen and apply them on the mats. I know it is difficult and chaotic and you have no idea what you’re doing. However, if you try to apply any of the tips we offer, things are going to start making sense real soon. And after that first month expires, you’ll be all set to become a fearsome grappler.

Jiu-JItsu For Beginners: What You Need To Know

If it was the UFC that got you to enroll in BJJ, expect a world of difference from what you see on TV. BJJ is a grappling sport that revolves around fighting on the ground. Getting the fight to the ground is also a part of the art, although not as extensively trained as in Judo, for example. If you expect to work on a lot of striking you’ll be disappointed. Apart from certain self-defense scenarios, most BJJ academies focus solely on groundwork. The whole point of the art is to get into a better position than your opponent on the ground, this allows you to control an opponent long enough to apply a stranglehold or a joint lock.

next up in our Jiu-Jitsu for beginners course is your attitude. Although much less formal than other martial arts, BJJ still requires discipline. Needless to say, you need to be on time, respectful, and clean, wearing the appropriate training attire. This is where the listening part also plays a major role. Apart from listening to the tips in this article, listen to your coaches.

Also, accept the fact that you’ll be in pain. Some small injuries are sure to follow after years of training. But in the first month, the pain is different. It is going to be painful to endure people on top of you, restricting your breathing and looking to turn you into a pretzel. Accept it and you’ll soon get used to it. 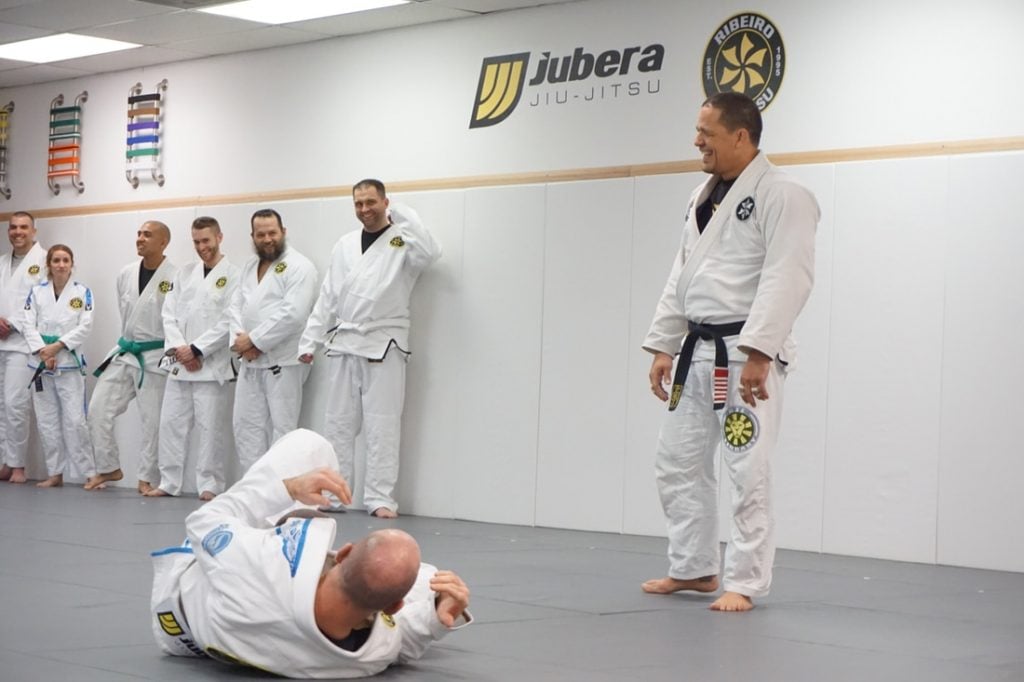 The first thing to understand is the class itself. Regular classes start with a lineup, followed by a warm-up. During the lineup, you need to figure out where beginners are and where advanced students are. Once you figure out where the white belts stand, go at the very end of the line. Until you get a stripe on your belt, this is where you’ll stand. Within a blet color, a number of stripes determine your spot in the line.

Next up, warm-ups. These are going to seem like workouts by themselves in the very beginning. Do not slack or rush through them as warm-ups are where you’ll master a lot of the most important movements.

The technical portion of the class is right after warming up, where you see the instructor demonstrate a move and then you go try it out with a partner. Later on, you’ll have the option to try the moves “live” in a very specific situation through position sparring or drilling.

Finally, it’s time to roll for a few rounds, where anything goes. This is the part that’s going to be the hardest for beginners. It’s both crazy fun, unbelievable hard, and really humbling. Which brings us to our next point.

It won’t take long to figure out that Jiu-Jitsu for beginners is all about survival. However, there is simple survival at all costs and smart ways to survive. For BJJ, you want to survive by understanding what’s going on around you. During your first month, you won’t have any idea what people are doing in any portion of the class, especially rolling. This is normal, and you should accept that it takes time to figure out how to survive without gassing out before tapping. ti will happen though, so just focus on surviving when you roll or do position sparring. Leave attacks for later on.

What you’ll encounter during your first month of JIu-Jitsu is a whole new world. new people, new movements, a lot of details on each move, new names… Een if you train for hours every day, you won’t be able to understand it all soon. So, you’ll need to do a bit of homework.

For this, you have two best friends. The easiest one is Youtube. Go online and figure out what exactly was going on during last night’s class. Or go a step further and buy a DVD. Just remember to focus on precise those DVDs that are all about Jiu-Jitsu for beginners.

One such example is Bernardo Faria’s “Foundations Of Brazilian Jiu-Jitsu” DVD set.  Bernardo is a world-class coach that’ll have the simple answers to any of your trillions of burning questions. Remember that DVDs are just homework and you can’t learn BJJ unless you use them in conjunction with live training. 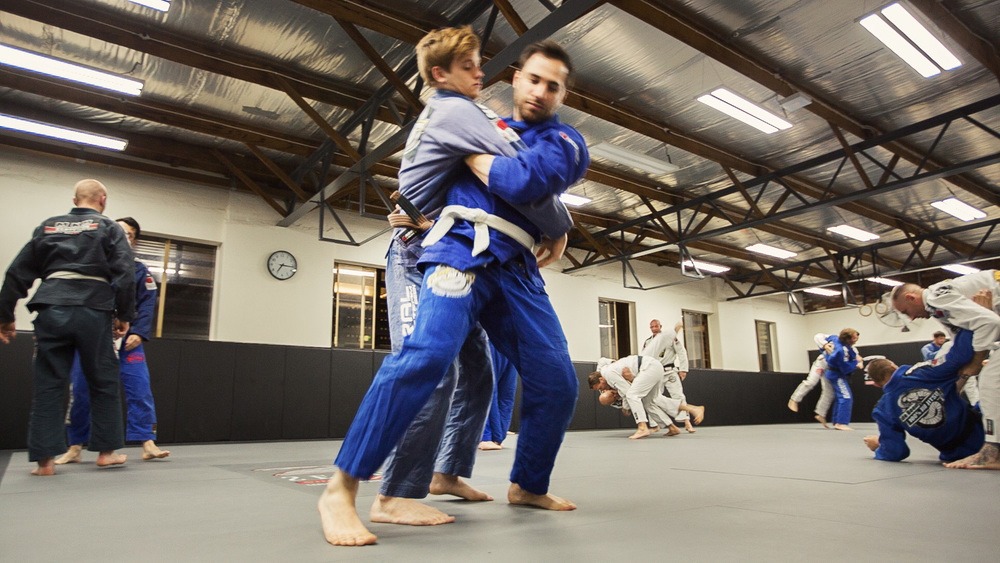 When you roll, there’s just one Jiu-Jitsu for beginners rules to follow – Tap! If you feel discomfort, tap. If you’re unsure what is going on, tap. When you feel too tired to move, tap. Whatever happens, do not be stubborn! It is not only going to get you hurt, you won’t actually learn anything by trying to hold on for dear life. You’ll try, that’s for sure, but be the smart one and accept that it doesn’t work. So instead of doing it all over again, go for smart survival. FIght back as long as you can, but tap once there are no more options. You’re going to tap anyway, this is just the most painless way.

The last crucial tip for beginners is to find a way to fall in love with drills. Nothing is going to get you through your first month of Jiu-Jitsu like constant drilling. While you might have difficulties with more complex moves in class or doing anything meaningful in rolling, you can hardly go wrong with drills. Drills usually focus on very specific movements of parts of techniques that are crucial. Do them over and over again, do one rep more than what your instructor asks. Do them right and you’ll be well on your way to understanding just what is going on when slapping and bumping every other night.

Shortcuts and Directions For The Fastest Progress in Jiu Jitsu

Who Should You Spar With for the Fastest Progress in BJJ?

BJJ For Small Guys: How To Beat Bigger Grapplers