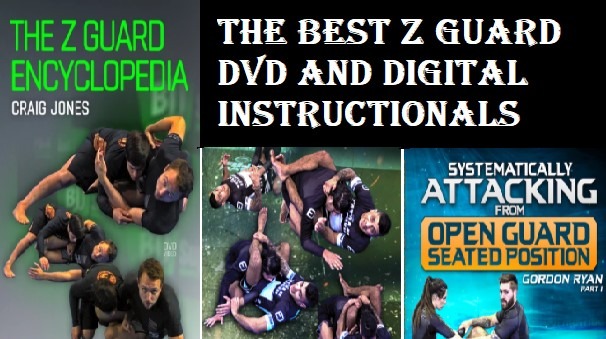 The Z Guard or knee shield as some know it is one of the most utilized guards in Brazilian Jiu-Jitsu. It is a variation of the half guard,. although it is also an open guard under certain circumstances. Whatever the case, it is an absolute must for anyone interested in competitive Jiu-Jitsu, and it is one that you can’t just learn on your own. Luckily there are experts out there, and even more importantly, they have some amazing Z guard DVD content out for us to learn from.

Whether you like to use the Z guard in a defensive manner, or you like to attack from there, there’s no way around it. you’re going to end up using it whether you want to or not, AS such, you need to understand this guard and how ti works. It is not too complicated mechanically, but it does offer plenty of different sweeps and submissions that you need to learn and organize in a system that fits you. Al the Z guard DVD instructional ever made, along with or top pick are listed below. use them to build a Z guard game that nobody will be able to solve!

The Z Guard is something that I often see people doing instinctively. FO course, they mess it up completely, but that’s just because they still have no idea how the guard works. however, since the positions, not one that’s awkward (like an invited guard, for example) anyone can do it. that just means that people only need a nudge in the right direction to start figuring out how this awesome guard actually works.

It would be great if we could all learn from a Z Guard specialist like Craig Jones on a daily basis. Despite the widespread use of this guard, though, not many people really specialize in it or are able to teach it in its entirety to others. Of course, there are Z Guard DVD instructional available, but what are they? Often times, the z guard secrets are hidden within instructionals that bear other names.

We did all the hard work for you, identifying and listing all the instructional and digital content out there that has anything to do with the BJJ Z Guard. Basically, we compiled the ultimate Z guard instructional collection for you, and we went even further, identifying the number one Instructional you simply have to own if this guard is to be your forté!

As you might expect, our top pick has to do with the one man that’s arguably the best Z guard player out there – Craig Jones. It is not that other instructional won’t cover the Z guard from all possible angles. it is just that Craig made a real name of himself by using this guard at the highest levels of the sport. Furthermore, he has the only Z Guard DVD instructional that only addresses the inner workings of this guard and nothing else.

The Z guard Encyclopedia is one of Craig Jones’s best DVDs. It is a true encyclopedia, with three volumes in the set that contains every bit of information on the Z guard you’ll ever need. Moreover, Craig is an inspiring teacher. He doesn’t only know how the guard works but knows how to use it against top-level opponents as well. His experiences with it mean that he irons out kinks and common questions as the instructional goes on.

Just as a side note, Craig’s triangle chokes from the Z guard are his best attacks, and he spares no details in explaining them entirely in this instructional. Oh, and by the way, even though this is a NO-Gi instructional, everything in it works with the Gi just as well.

List Of Every Z Guard DVD Instructional Out There

Apart from Craig, others have used the Z guard to great levels of success as well. While many do not have the dedicated instructional Craig does, they do have entire sections of their DVD sets devoted to this guard.

The seated open guard instructional by Gordon Ryan addresses the Z Guard constantly, in multiple sections of the 8 volumes this instructional contains. Even though it is not a dedicated Z Guard DVD there are lots to be learned from this one!

JT Torres is undoubtedly one of the best in the game. He has a very wicked guard game and most of it is based around the Z Guard. While he explores many aspects of the bottom game for No-Gi in this DVD, he also uncovers some great secrets of the Z Guard that have helped him win world titles.

The only other specialized Z Guard DVD instructional out there in addition to Craig Jones’. Hiago Gama takes a different approach from Craig, though, exploring the Z guard from the perspective of Gi players. Three volumes on this DVD cover everything you need to know. As a hint, combining this release with that of Jones is probably all you’ll lever need to figure out the Z Guard.

4. Cross Sleeve Grip Guard Beyond The Basics by Thomas Lisboa

Another Gi instructional refereeing to the Z Guard in many of its chapters. Thomas Lisboa is one of the most intricate guard players out there and he takes a lot of time to go into the depths of the Z Guard in relation to that collar sleeve guard he loves to use.

Although Z Guard DVD instructionals are scarce, compared to some other aspects of Jiu-Jitsu, it doesn’t mean there is not some high-quality material available, You just need to know where to look, and how to fit all the pieces of the puzzle together. use the list above to put together the best Z guard DVD collecton ever, and take your game to the next level.