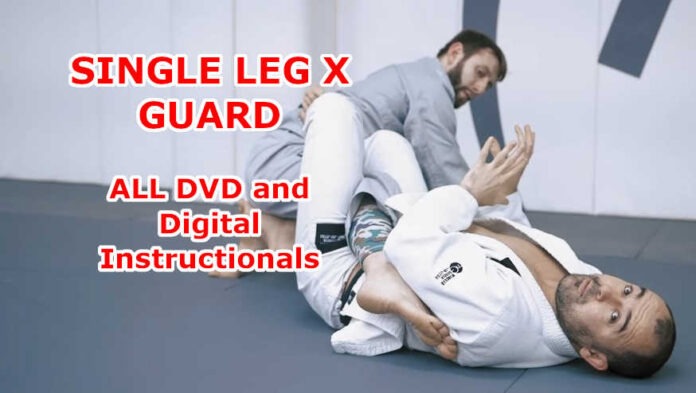 What is the most popular and effective open guard variation that you can play these days? If your answer has anything to do with the X Guard, you’re on the right track. Precisely speaking it is the Single Leg X Guard, the one guard that burst onto the scene when leg locks became the thing everyone wants to do. What people sometimes forget is that the Single Leg X is actually a very complete guard on its own, with lots of transitioning and sweeps options. Leg locks are only the cherry on top. In fact, why not look into all the Single Leg X Guard DVD instructionals we have for you here to learn more?

These days, there are quite a few Single Leg X Guard DVD instructionals out there, which was not the case up until a few years ago. I would know, as I’ve always loved the guard, but couldn’t find a digital source to learn about it. I guess we have leg locks to thank for changing that. The good news is in the modern instructionals, you get all the leg lock information, but also all to of the other aspects of the guard, which have fallen a bit into the background in modern BJJ. Check out the complete collection below!

The Single Leg X Guard is a very popular one that seems like it’s no big deal but there’s actually a lot of little details to figure out how to hold it. Getting there is not that much of a difficult thing, but staying in the guard for a while, especially if you are the smaller grappler, does require some mechanical secrets that only seasoned players of the guard can uncover for you.

The Single Leg X Guard DVD instructionals we have for you will take care of all the technical details. There are plenty of entries in them from guards, scrambles, and even ways to pull the Single Leg X. Of course, all the sweeps you can imagine are covered in details as well as the key transitions to other guards. For example, the X Guard, the shin-to-shin guard, and pretty much any open guard are right there all extremely near to the Single Leg X. It is one of the reasons why many people at least dabble with the guard – it is so easy to get to.

With the Single Leg X Guard, the one thing you should pay a lot of attention to is how high your hips are. As long as you keep your hips above the opponent’s s knee, you’ll have a lot of luck with it. If let them drop lower, or keep them on the mats, you’re not actually in the guard at all and you’ll get smashed. This is the single most important thing about the Single Leg X Guard that you need to know. Clamping down with the legs at hip level will prevent people from breaking your guard open and if you combine this with keeping your hips high, you can pretty much get away with anything from the Single Leg X Guard position.

The following instructionals are by far the best ones you can get when you’re looking to start experimenting with or specialize in the Single Leg X guard. In fact, since we couldn’t pick just one, we have the top three Single Leg X Guard DVD instructionals for you below. 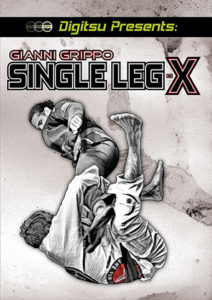 One of the best guard players alive, Gi or No-Gi is Gianni Grippo. The multiple-time world champion has a real diverse guard game that includes a lot of single-leg X guard. In fact, he likes to rely on it so much that he has an entire dedicated instructional on how to play it, starting with entries and ending up with passes you can connect with some of the Single Leg X Guard sweeps. 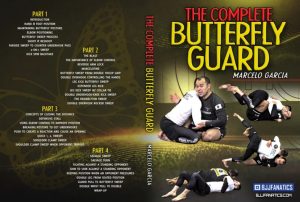 One of the pioneers of the position is Marcel Garcia. After all, he is the man that popularized the single leg X to a certain extent. While the name of this instructional doesn’t suggest a Single LE#eg X Guard DVD, it actually contains a lot more information on this guard, than it does on its best friend – the butterfly guard. After all, they do work in unison, so this is one of the best Single Leg X systems you can learn.

3. Single Leg X Beyond The Basics by Thomas Lisboa 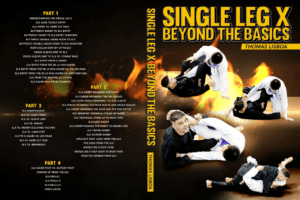 Thomas Lisboa also has one of the best ever Single Leg X Guard DVD instructionals. His take is a more competitive one, always thinking about gaining points and advantages over an opponent, and is one of the few modern Single Leg X instructionals shot in the Gi. While it is mostly for competitors anyone can really benefit from this one, regardless of the level of experience.

List Of All Single Leg X Guard DVD Instructionals Out There

Let’s now look at all the other Single Leg X Guard DVD instructionals that are at our disposal. There are plenty out there and each has lots to teach you about the position! 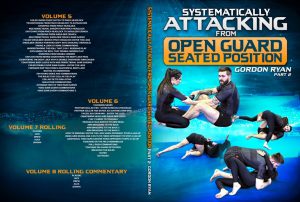 Gordon Ryan’s open guard NO-Gi DVD covers a whole myriad of open guard.s Given his inclination towards leg locks though it comes as no surprise that he spends nearly half the time talking about the Single Leg and all possible variations from there.

2. How To Beat Bigger Guys by Bruno Malfacine 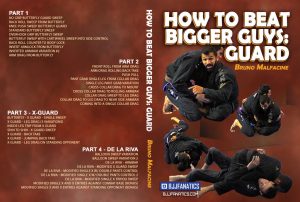 Bruno is the ultimate representative of small folks in BJJ. The 10 times world champion will teach you how to deal with bigger grapplers from your guard, and in particular, the Singel Leg X Guard. 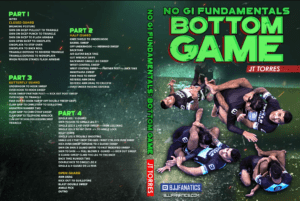 Another aspect of the No-Gi single leg X guard, this time from the perspective of JT Torres, means it is more geared towards IBJJF rules and requirements.

4. How To Dominate Single Leg X by Dominique Bell 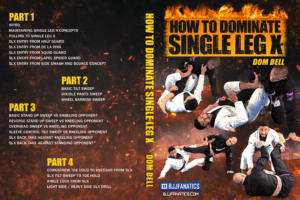 This Single Leg X Guard instructional will teach you how to dominate from a position with the Gi, and always end up on top, or get a tap. 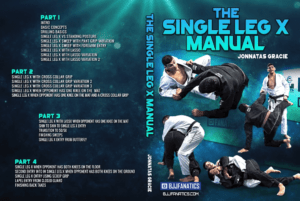 A Gracie instructional on the subject of the Single Leg X, with Jonnatas Gracie as the instructor. The four volumes in this one are all about the fundamentals of the position and why and how it works. Perfect for all levels. 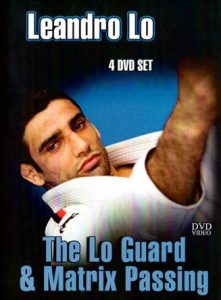 A name that needs no introduction, Lo’s proficiency with the Single Leg X Guard has been more than well documented. This unique instructional with not only make you better at the Single Leg X, but help you connect it with passing sequences as well. 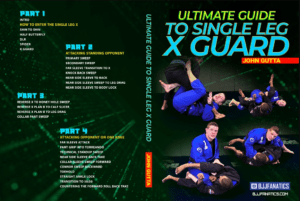 Basics, easy to follow lessons, and in the end, an entire system that works like a charm. That is what the four volumes of this Single Leg X Guard VD contain. Once again, a Gi instructional.

8. The Aggressive Open Guard No Gi by Johnny Tama 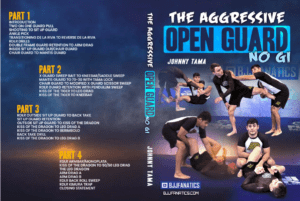 This instructional covers several open guard variations, but it is centered around the Singel Leg X Guard for the most part. It is aimed at people who are not interested in retention, but rather constant attacking from the guard.

9. The Belly Down Footlock From Single Leg X by Tarik Hopstock 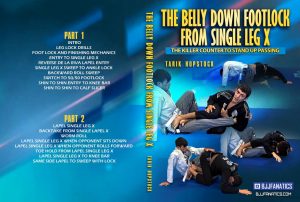 Tarik is one of the top competitors coming from Europe and a real wizard when it comes to certain BJJ positions and moves. the Single Leg X guard happens to be one of his favorites.

10. Cross Sleeve Grip Guard Beyond The Basics by Thomas Lisboa 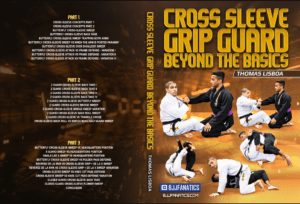 This is a very interesting instructional that I can’t recommend highly enough. It focuses on the cross sleeve grip guard and goes into explaining how it connects with the likes of the Single Leg X and shin-to-shin in a very intricate and highly effective system. 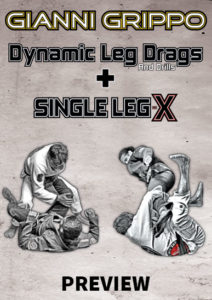 If you’d like a preview of Gianni Grippo’s Single Leg X Guard DVD, this one will tell you everything you need to know about the full instructional. 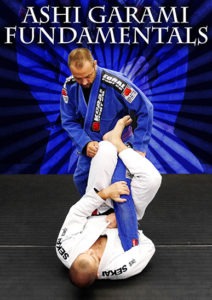 Finally, a leg lock-focused version of the Single Leg X Guard with the Gi. This one focuses on a lot of ankle lock mechanics and leg lock combinations that are all legal under IBJJF rules.

The Single Leg X is a mandatory guard nowadays, whether or not you subscribe to the whole leg lock madness. In that sense, take a look into any of the Single Leg X Guard DVD instructionals above in order to really understand what the position is all about. You can then use it to exploit one or all of its many benefits when it comes to rolling and competition.