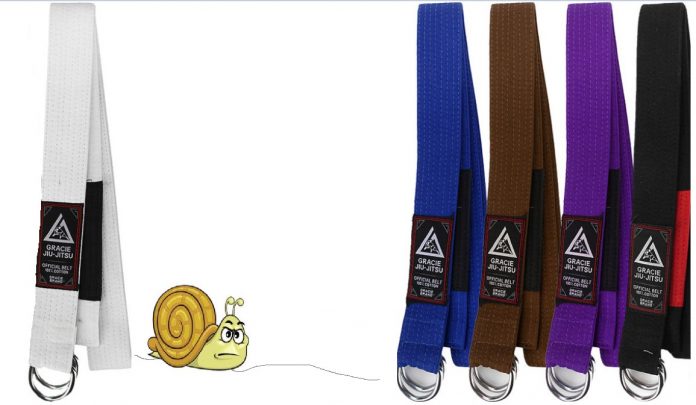 Contents hide
1. You worry too much about tapping.
2. You think you don’t need to learn anything new.
3. You don’t know what “good base” means.
4. You focus too much on defense.
5. You focus too much on submissions and not on position.
6. You’re not asking enough questions.
7. You tap too early or too late.
8. You’re avoiding tough sparrings.
9. You don’t keep a notebook.
10. You don’t focus on physical conditioning, strength, and a healthy lifestyle enough.
11. You don’t compete.
12. You’re always rolling too hard, you’re not focused on technique and you don’t care about hurting your training partners.
13. You don’t focus on learning something every class.
14. You don’t focus enough on fundamentals.
15. You want it all and you want it now.
16. You don’t focus on takedowns.
17. You think you’re “stupid” and you can’t learn some technique or concept.
18. You don’t drill enough.
19. You use your best stuff on people that are much worse than you.
20. You worry too much about belts.
21. You don’t focus on grips.
22. You come to class to lose time.
23. You keep your elbows far away from you.
24. You don’t study outside of the class.
25. Train consistently.
You Might Also Be Interested in:

1. You worry too much about tapping.

When you’re in BJJ class you’re actually training and not competing so it doesn’t matter how many times you tapped if you learned something every time from it. So don’t just tap, take a moment and think about it.

2. You think you don’t need to learn anything new.

It’s a common mistake of people training for a year or so. They just think they know enough for their time. No, you don’t, there is always something missing in a puzzle. There is always some detail and there are always new techniques waiting for you.

In every single position learn where is your “body center”, where your center should be. Think about your base in every position that you find yourself in as this will help you avoid many sweeps and bad situations.

4. You focus too much on defense.

If you focus too much on defense you are losing time. Escapes from submissions and positions are a very low percentage so don’t lose too much time on it. You better spend your time learning how to avoid getting into trouble. For example, it’s like thinking about “two arms in, two arms out” when you don’t want to get into a triangle.

5. You focus too much on submissions and not on position.

Being in a good position will get your submission. But failed submission most of the time leads to a bad position. Especially when you know too many submissions and you can’t get in a position to do them. For example. If you’re capable enough of passing your opponent’s guard and dominate him all the time you will be able to submit him a lot of times, you’ll see, but if you can’t pass guard and you know 20 submissions from side control… you get it!

Tapping too early will bring you to a point that you will never learn any escape and tapping too late will get you to the hospital and you won’t progress for sure.

There will always be a heavy guy, a strong guy, or any type of guy that is causing you a lot of problems. Learn to deal with anyone. Avoiding those guys will get you to a point that you have no idea how to deal with different types of people and that is very bad for your progress. You should leave your comfort zone as much as possible.

If you can write down techniques that will help you really think about techniques and get deep into them as they are hard to be written.

10. You don’t focus on physical conditioning, strength, and a healthy lifestyle enough.

There is no perfect time to compete and you are never ready. You will always miss something. That means your opponents are also not ready. So, go for it as people who compete, usually progress much faster.

12. You’re always rolling too hard, you’re not focused on technique and you don’t care about hurting your training partners.

If you always roll too hard you will lose every partner to roll with. The only people that will want to roll with you will be guys who will want to teach you a lesson. The problem is also that guys usually don’t understand that they’re rolling too hard so if few people tell you that you roll hard it’s 99.9% of the time true! Also, this is very important for progress because if you roll hard you’re not that focused on technique, you’re just focused on submitting your training partners and that’s exactly the opposite of fast progress. You don’t wanna be that guy as people will think of you as a douchebag.

13. You don’t focus on learning something every class.

14. You don’t focus enough on fundamentals.

I’ve seen a lot of guys that just came to train and they want to do leg locks, Imanari rolls, berimbolo, and all the fancy stuff, etc. The most stupid thing I can hear from people is “I want to win my tournament match like that because it’s an attractive move”. I never saw those guys winning yet and what I can also see is that they’re not progressing as fast as they can.

This means you want to learn as many techniques as you can in a short amount of time, but that also means that you can’t do all those techniques. Saulo Ribeiro once said that he could teach someone all the Jiu-Jitsu he knows in a few months but that the person wouldn’t be able to do most of it.

This will cost you sooner or later and especially in competition. This can be a problem with schools and instructors who don’t teach takedowns but then cross-train in wrestling or Judo.

17. You think you’re “stupid” and you can’t learn some technique or concept.

Yes, you can! It’s not that much of a problem if your instructor is teaching rubber guard and you know you can’t do it because you’re not flexible enough. But it’s a problem if you think that you can’t learn how to be on the bottom. That also makes you look stupid if you say that to someone.

Drill in your class and find some partner to drill outside of the class. I feel sorry for people not drilling techniques and waiting for sparring. No matter if you’re the most talented guy on earth you’ll stay exactly where you are. You’ll have a good roll, maybe you will beat your sparring partners with your talent on your level, but in a long run, you will just be a good lower belt.

19. You use your best stuff on people that are much worse than you.

When you work with guys much worse than you use that time to try something new, to focus on your weaknesses. Get yourself in bad positions, try yourself in situations that you have problems with against better people.

20. You worry too much about belts.

You better worry about your skill development and belts will come with it. Also, your instructor will think that you’re funny or douche, but that won’t help you get the belt most of the time.

For example! If you always let someone control your both legs while you’re playing guard, trust me, he will pass it. You have to focus on grips and breaking grips both offensive and defensive ones.

It’s ok if you just want to come and chat, but don’t expect that will bring your skill higher fast enough. Also, don’t waste someone else’s time just because you feel like chatting. People usually come to class to learn something.

23. You keep your elbows far away from you.

Keep your friends close and your elbows closer. This will get you out of a lot of trouble.

24. You don’t study outside of the class.

Being consistent is one of the most important things when you’re starting with BJJ. As a complex sport as BJJ is missing some fundamental things that can bring you to a point that you miss them for the rest of your life. And you don’t want that!