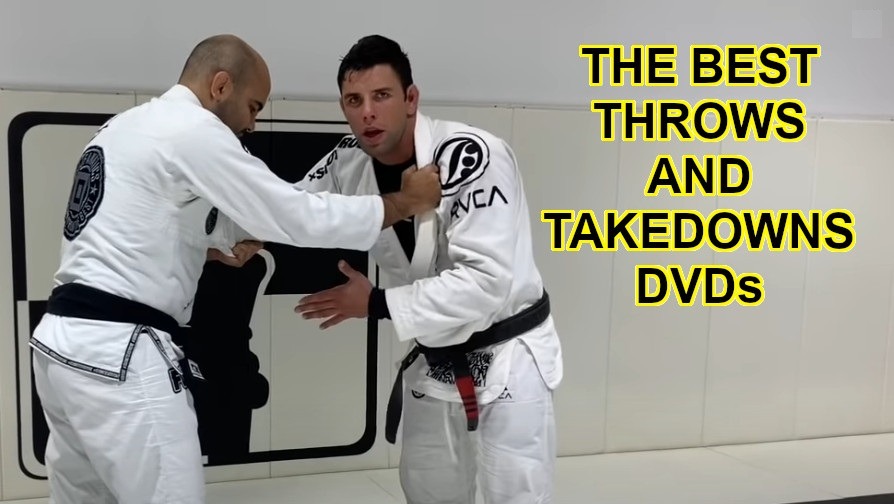 Taking people down is funky business. It is highly entertaining and very rewarding. That is because it is one of the hardest things to do in combat sports, whether it is pure grappling or mixed martial arts. On that note, doing takedowns with the Gi is notably more challenging given the endless grip possibilities. It also means there are lots of techniques that you can learn from other grappling arts, like Judo and Sambo that also utilize Gis. If your focus is to take people down in Gi BJJ, then you’re going to need BJJ Gi takedowns DVD instructionals to learn from.

Gi takedowns DVD instructionals are not hard to find. There are quite a lot of them out there intended for use in Judo and/or Sambo. However, using those techniques in Brazilian Jiu-Jitsu requires a slightly different approach. Jiu-Jitsu rules and options are different from the aforementioned arts, meaning that going for a pure Judo takedown can get you into trouble rather than help you get the match to the ground. This was a huge determinant in which BJJ Gi takedowns DVD instructionals make our collection, and more importantly, our top five list.

Takedowns are hard for people because they’re very difficult to predict. Nothing ever goes according to plan with them, and if you can’t keep an open mind and adjust along the way, you’ll have a hard time figuring takedowns out. With all the grips available during Gi takedowns, this issue becomes even more prominent.

Training takedowns is chaos. As much as we strive towards control on the ground in BJJ, we have to accept that the standing exchanges are pure chaos. There’s no way of training for them in steps o, or ina controlled fashion as we do, when we learn, for example, a closed guard Kimura. When you decide to actually learn takedowns, and not just the steps to a throw or takedown, you’ll need to first embrace this aspect of practicing from standing.

Only when you’re aware of the entropic nature of taking people down can you start thinking about focusing on a single technique, ora set of them. to that extent chaos doesn’t mean you can’t use precision weapons, it just means you need to time them right. That brings us to the final piece of the puzzle – after you know what moves you’re going to do, you’ll have to figure timing and st ups out. The simplest way of creating a system that will fit you is by utilizing the help of any of the BJJ Gi takedowns DVD instructional listed above. All you’re going to have to do then is put it to practice on the mats.

Let’s kick things off with the top five picks that I personally enjoy when it comes to learning takedowns that work like a charm for Gi Jiu-Jitsu.

1. The Buchecha Takedown System In The Gi by Marcus “Buchecha” Almeida 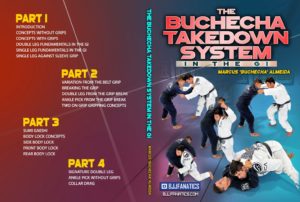 Buchecha is one of the best when it comes to doing takedowns in Jiu-Jitsu. In fact, I can’t remember him pulling guard in competition. When it comes to throwing people around, especially with the Gi his system is tired and tested one at the highest levels of the sport. Conversely, his four-part instructional is the best one to begin your Gi takedowns journey with.

2. The Takedown Blueprint by Jimmy Pedro and Travis Stevens 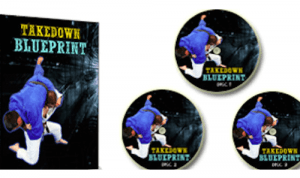 Of course, we’re going to feature an Olympic Judo medalist and a Danaher black belt in an article about Gi takedowns. Travis Stevens has one of the best blueprints for throwing people with GIs around and he’s not alone. In this 3-part instructional he is joined by his teacher and legendary Judoka Jimmy Pedro as well. 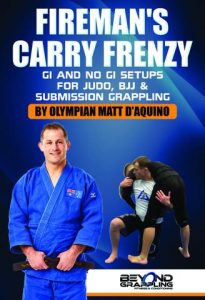 The fireman carry is one of the best takedowns in grappling martial arts. It works with and without the Gi, although Gi setups are much more diverse. Matt D’aquino, another great Judoka and BJJ black belt, has a great take on adjusting the Judo Kata Guruma throw to fit the needs of BJJ. 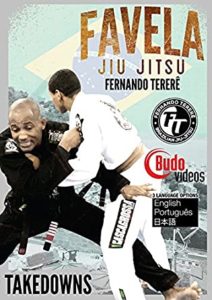 Terere is one of the utmost experts on Gi Jiu-Jitsu, and he also happens to have a very interesting and unusual takedown system. Apart from his signature Safada takedown, you learn a lot more of Terere’s Favela takedowns from this release. 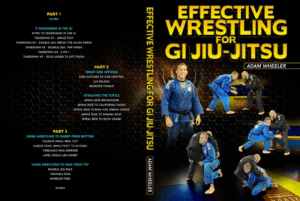 Adam Wheeler is another takedown enthusiast who likes to keep things variable. He has a wrestling background at the Olympic level, as well as a black belt in Jiu-Jitsu. He has a great formula of adopting wrestling takedowns to Gi Jiu-Jitsu which is one of the more unique systems in existence.

List Of Every BJJ Gi Takedown DVD Instructional Out There

Going further into our exploration of BJJ Gi Takedown DVD instructionals, we have several more very entertaining titles that offer something different in the area of Gi takedowns. 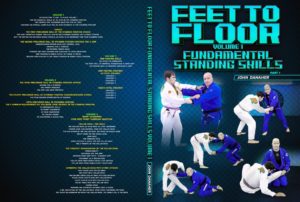 Danaher’s brand new series ‘Feet to Floor” is all about takedowns and it is a Gi instructional. As usual, there are 8 parts to it, and three different DVDs (so far) that cover this subject.

2. Simple Judo Takedowns For BJJ Digital Only by Matt D’Aquino 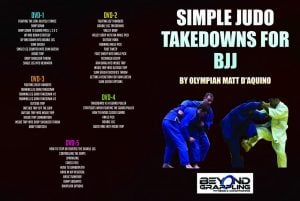 Keeping things simple with Judo for BJJ. A five-part instructional by Matt D’Aquino that covers only those Judo techniques that will work 100% in Jiu-Jitsu

3. Sambo for BJJ by Vlad Koulikov 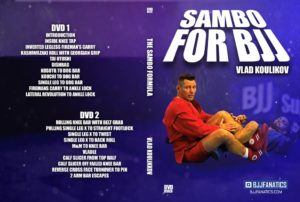 What Travis Stevens is to Judo and Adam Wheeler is to wrestling, Vladislav Koulikov is o Sambo. Although you might not consider Sambo takedowns to be appropriate for BJJ, they’re more than a great fit- they’re perfect. 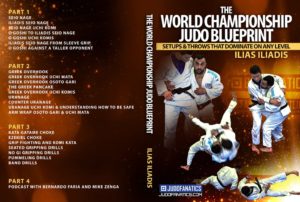 A world champion and an Olympic gold medalist in Judo, Ilias Iliadis knows literally everything there is about grabbing people’s Gis and using them to throw them to the ground in a devastating fashion. 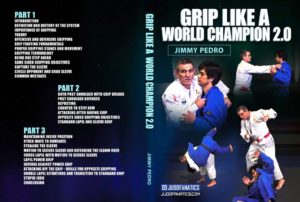 Jimmy Pedro covers what is the most important aspect of the Gi takedowns game – gripping. The world-class Judo coach explains everything there is about gripping and breaking grips in this incredible 3-part instructional. 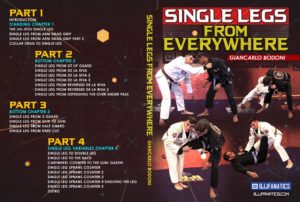 Giancarlo Bodoni likes single legs. After you see this DVD, you will too, particularly with the Gi. 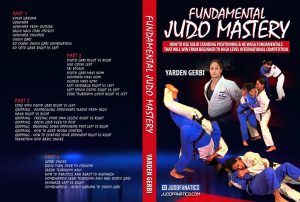 Yarden Gerbi is another huge name in Judo, that has a great system of setting up throws with the Gi. this one is great for beginners and every one of smaller stature. 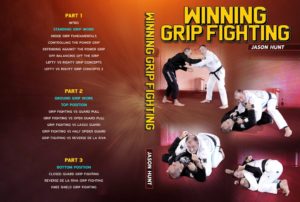 Along the lines of Jimmy Pedro’s grip fighting instructional, Jason Hunt has a title on the seemed subject, covering nothing but ways of winning every grip fighting exchange. 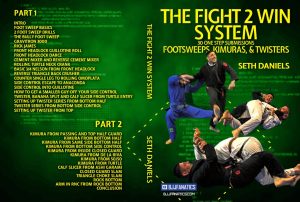 Seth Daniels is the man behind Fight2Win and he has an instructional out that outlines his own system of Jiu-Jitsu. One of the volumes in there is all about taking people down, and it is a Gi instructional. 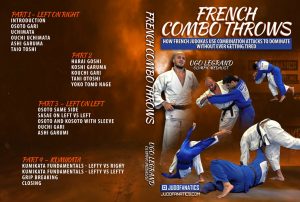 Ugo LeGrand, A French Judoka offers us an insight into the French Judo system. This Gi takedowns DVD covers nothing but awesome throw combinations perfect for BJJ. 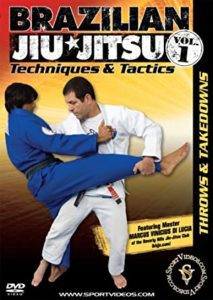 A very interesting title that covers not just Gi takedowns and throws techniques but also a tactical approach on how to make them work for Brazilian Jiu-Jitsu.