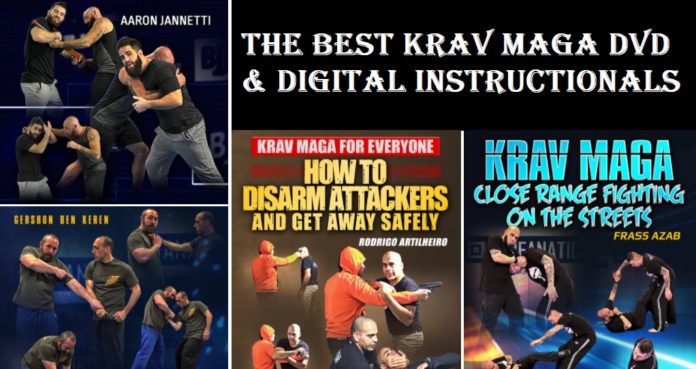 Krav Maga is a fighting system developed for the needs of the Israeli military. While many consider it a martial art, its founder, Imi Lichtenfeld never intended it as such. It is basically a combination of many other martial arts combined together in the most efficient system for hand-to-hand combat. Well, one of the most efficient ones, at the very least. That said, Krav Maga has since evolved into a civilian version as well, one that is very popular around the world. While training in a gym is irreplaceable, you can learn a lot about the system from the Krav Maga DVD instructional and we have the ultimate collection lined up for you.

Krav Maga has been somewhat mocked last of late, and there is a good reason for it – there are a lot of “wannabes” out there that claim they’re experts at teaching people self-defense. When the proverbial excrement hits the fan, and people realize that they’ve been taught nothing of use, the name of the entire system gets dragged to the mud. Obviously, if it didn’t work it would not be used by the Israeli special forces, the FBI, and the likes. That just means you need to learn from a proven source, like the Krav Maga DVD instructionals we have here.

Krav Maga is something I got involved in before I even started BJJ. The system was originally a combination of Judo, Karate, boxing, and kickboxing, combining all of them in a way that benefits the needs of soldiers on the battlefield in close-quarters situations. The system has since evolved by incorporating BJJ and MMA tactics and combinations to make it even more effective.

The thing that makes Krav Maga different from other self-defense systems out there is the way they train. There are not many techniques, but rather just simple and effective ones based on the natural reactions most of us have as humans. Krav Maga is usually set up in scenario-like situations, covering most violent altercation situations which are statistically likely to happen. The simplicity of the system makes it easy to pick up in just a few months, in terms of effectively being able to defend yourself. It also has ranks and it takes a few years to achieve an expert level.

One aspect of Krav maga training that is very useful is the so-called stress drills. These are scenario drills where people really do attack you, even though it is in a controlled environment in the gym, and cause your body to elicit the same stress reaction you would have in a real-life situation. Some of those drills are part of the Krav Maga DVD instructionals in our list, which is exactly why they made it into our collection.

Out of all the Krav Maga DVD instructional we have for you today, there’s one that stands above the others when it comes to the material it has to offer. We classify it as our top pick, and it is a great one, to begin with, even if you have no prior experience in Krav Maga or martial arts in general.

Beyond Krav Maga by Aaron Jannetti 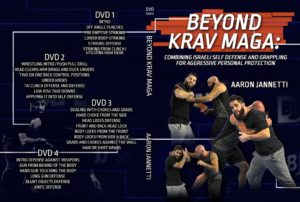 Beyond Krav Maga is a DVD that teaches a very efficient combination of Krav Maga and submission grappling, with self-defense as the main goal. From Krav Maga and grappling basics all the way to weapon defense and scenarios, this Krav Maga DVD is perfect for everyone. Keep in mind that while this instruction will teach you about Krav Maga, it will take drilling in a gym with real stress drills to actually learn how to defend yourself in real-life scenarios.

The rest of the Krav Maga DVDs worth mentioning:

Below are a few more Krav Maga DVD instructionals that are definitely worth your time, if you’re looking to pick up a very effective and fast to learn self-defense system. 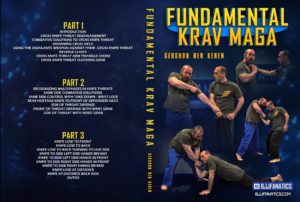 Fundamentals of Krav Maga. The title says it all, really. This three-part instructional will teach you just about everything about the basics in Krav Maga, from the 360 blocking system to some key training drills.

2. Krav Maga Close-Range Fighting On The Streets by Frass Azab 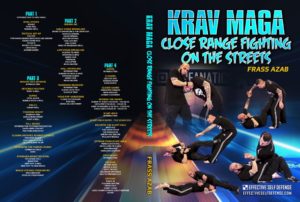 Lots of scenarios in this one, similar to those in live training Four volumes in this DVD set cover well over 50 different situations where KravMaga might help you out of a tight spot.

3. Krav Maga For Everyone: How To Disarm Attackers by Rodrigo Artilheiro 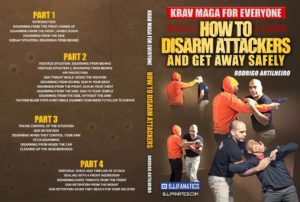 Rodrigo Artilheiro has put together one of the best Krav Maga DVD instructionals ever in his “Krav Maga for Everyone” set. The four-part DVD covers some of the key concepts for Krav maga, like personal space, lines of attack, mindset, etc. he also covers how to disarm attackers yielding some of the most common weapons, like guns, knives, and sticks. 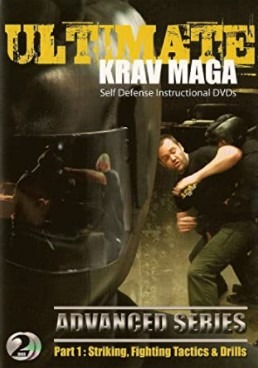 This is one of the most popular Krav Maga DVD courses out there. Winning international prizes, including Aurora gold and Telly awards, really means something if we’re going to spend our money to learn Krav Maga.

The best thing about Ultimate Krav Maga is that it doesn’t teach only how to do something, but it also teaches you why. It’s a pretty in-depth detailed way of teaching. Maybe the best part of this DVD is that it’s made by some of the best Krav maga instructors in the world, like Amnon Darsa, John Whitman and others.

The good part about this set is that there’s a lot of drills and if you’re going to go through everything you’ll sweat a lot, that’s for sure. But, that’s the only way to really learn and be effective in real-life self-defence scenarios.

This DVD set includes a lot of Fighting and striking tactics like headbutts, spinning kicks, Chops and other combinations combined with Pressure drills focused on the psychological effect of being attacked and other useful stuff.

What is the best Krav Maga DVD?

It’s hard to tell what’s the best Krav Maga training DVD because Krav Maga schools have different approaches to training. Some include real sparring and some not. There are urban krav maga DVD courses and ultimate Krav Maga DVDs. I’ve been training Krav Maga and Grappling so from my point of view the best combination is to take DVDs that combine the best of both worlds.

Krav Maga is a great option for self-defense, provided you train with a renowned instructor. The same applies to Krav Maga DVD instructional – they’re only as good as the person teaching. Any of the instructional above will help you understand Krav Maga better and give you some training ideas.

However, you can’t hope to learn self-defense by only watching the Krav Maga DVD course so enrolling in a Krav Maga school is really a no-brainer. What’s even more important is that you should try to find a Krav Maga school that offers live sparring sessions with a combination of striking and grappling martial arts like Brazilian Jiu-Jitsu. With real sparring, you’ll be able to understand how and where to use moves that you learned together with the pressure and adrenaline rush you get when in a real fight scenario.