Contents hide
Can a trained girl fighter take on an untrained male challenger and win? IS training alone enough to provide all the tools a girl fighter requires for victory? It’s been don in video games, but now, it seems, it is also going to take place in real life. Brace yourself, as a girl fighter is about to square off with a male opponent, live!
Kristopher Zylinski Issues A Challenge To Any Female MMA Fighter
A Venue For The Challenge
Anna Dempster – The Girl Fighter To teach A Troll A LEsson
THE LATEST UPDATE:

Can a trained girl fighter take on an untrained male challenger and win? IS training alone enough to provide all the tools a girl fighter requires for victory? It’s been don in video games, but now, it seems, it is also going to take place in real life. Brace yourself, as a girl fighter is about to square off with a male opponent, live!

It is very easy to be a macho man or create a tough persona for yourself in modern times. There’s even a name for it – keyboard warriors. These are the people that know everything except actually doing what they’re talking about. Keyboard warriors are usually guys talking big about themselves. They are super strong, super confident, have some super powers when they’re behind their computer or mobile phone. As reality is a bit different, in a real-life situation they usually shut up in lack of bravery and/or conviction to stand their ground. Even against a girl fighter.

People that are not part of martial arts have no idea what training, and competing truly takes. When it comes to the finer half, being a girl fighter is probably the toughest job for a human being. Now imagine pouring your soul, blood, and tears into something and ending up ridiculed about it. Well, that’s how the martial arts community, especially the ladies, feel about the latest publicity stunt by a keyboard warrior.

Kristopher Zylinski Issues A Challenge To Any Female MMA Fighter

In this case, we have a “brave” keyboard warrior by the name of Kristopher Zylinski. Yeah, “brave”. Kristopher Zylinski is a man that has put himself forward as willing to beat up a woman. He thinks that no woman can beat a man because they lack in both strength and testosterone in comparison to men. He also thinks that there’s no training a woman can take to beat up a man. So, according to him, training some martial art like Jiu-Jitsu or MMA is useless.

Mr. Brave here thinks he can take on any girl fighter out there and is even willing t step out of the basement he hides in. He actually offered to square up with any girl fighter that’s willing to take the challenge. Furthermore, he is “ready to go” under any ruleset. Oh, what fun! The martial arts community jumped at the challenge, females at the front of it. Before soon, we have a few truly brave girls that are ready to teach this troll a lesson he won’t soon forget.

Check out the screenshots of what this keyboard warrior Kristopher Zylinski said to Mcdojolife page. 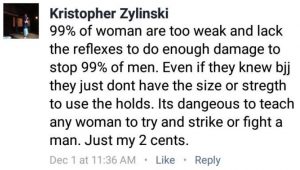 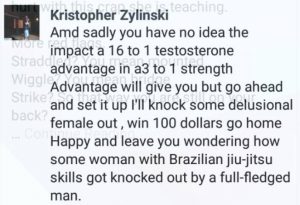 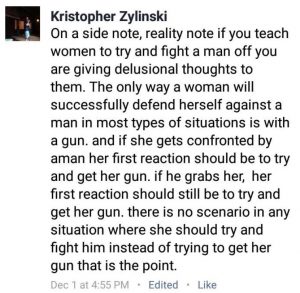 A Venue For The Challenge

The McDojoLife page is usually calling these guys out providing venues and opponent’s for keyboard warriors to prove their “worth”. They offered Kristopher Zylinski a fight with any girl fighter that will accept. There’s even a reward of $1000 for any lady that ends up beating this guy. Here’s their statement:

“We are willing to pay out $1,000 to any pro 160-pound girl fighter willing to come and spar with this man. We will also provide a plane ticket and hotel.

A member sent this to us and we are to intrigued to not try and set this fight up.

Apparently this guy lives in Gainesville, Florida and is willing to fight a pro female fighter in his weight class to prove women cannot beat men in a fight. Even if the woman is trained and the man is not. To our knowledge he has little to no experience.

Obviously we cannot set up a pro fight for legal reasons but we would definitely be willing to set up a “sparring” match with MMA rules.

“We decided to go all-out on this one because we have simply seen this crap way too much. We see a lot of ‘macho’ guys post and comment on our page all the time about what they can do”.

Anna Dempster – The Girl Fighter To teach A Troll A LEsson

It didn’t take too much time for some women to step up to the challenge. Turns out there are more than enough ladies out there ready to take on Kristopher Zylinski.  Girl fighter Anna Dempster is one of them. Anna applied to fight this guy with no hesitation whatsoever. Anna Dempster is a mixed martial artist with an amateur record of 7-0 and she’s more than ready to beat up this guy for his words.

Good luck to you Anna as we know that you’ll make the keyboard warrior eat his own words. All ina a days work, for this talented and courageous fighter! 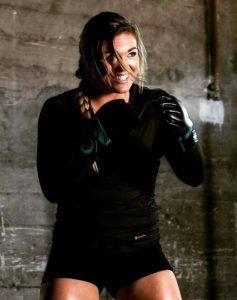 Unfortunately for Kristopher Zylinski, Anna Dempster accepted the challenge. Even worse for the keyboard warrior, he himself agreed to face her. Since both sides agree to fight, this fight/sparring is set to take place in Gainesville, Florida. Much to the pleasure of fight fans around the world, the match is going to be streamed online. Our Facebook Page BJJ World will cover the online stream live so make sure you stay tuned.

What do you think about this fight? Is a trained MMA girl fighter able to beat an untrained internet troll in the same weight division? So far, there are a lot of people cheering for Anna Dempster to take an easy win against Kristopher Zylinski. However, there’s the minority that shares the same thoughts as Kristopher. These people think that no matter the experience, a woman is simply no match for any man. that thinks it’s impossible. Time to make more than one keyboard warrior eat his own words!

For those not familiar with Anna’s MMA skills, here’s just a taste. You can watch an amateur fight of Anna Dempster in thea video below: