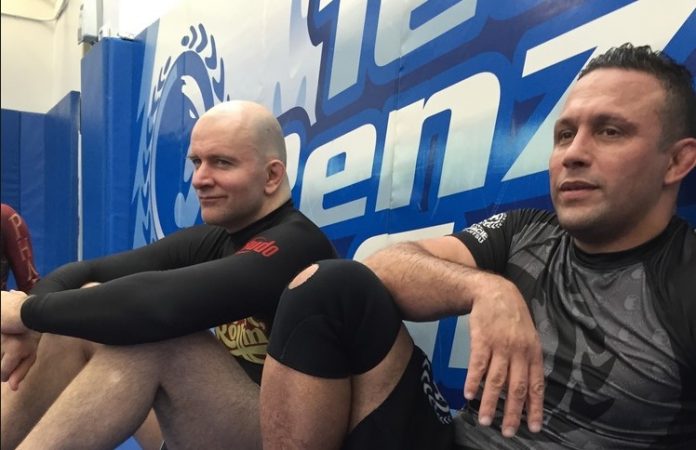 John Danaher is a long time Renzo Gracie student and this time he shares a story with Renzo Gracie being challenged in his academy. As Danaher witnessed the challenge here is what exactly happened there with a guy thinking he’s “unchokeable”.

Reflections on my sensei: When my sensei, Renzo Gracie, first moved permanently to the United States, jiu jitsu was in its absolute infancy here. It’s only publicity had come from early MMA fighting. The Martial arts scene in general was very primitive with all kinds of crazy arts making wild claims of fighting prowess and occult abilities.

MMA proved to have a wonderful cleansing effect on the world of martial arts as it made all claims subject to empirical testing – but that took years to complete.

In those early days of the Renzo Gracie Academy in NYC challenge matches and doubters seeking proof of the effectiveness of jiu jitsu were a common occurrence.

One night when sensei was teaching (I was a fresh white belt and there were only a few blue belts and two purple belts), a man walked quietly in and began quietly observing the class. When class was finished we all typically hung about and asked Mr Gracie questions and talked about fighting and women. The quiet stranger stepped forward into the group and politely inquired of Mr Gracie if he could test his best stranglehold. Rather taken aback by this request, Mr Gracie asked what he meant. The man stood up confidently and said, “I practice an art that makes me literally invulnerable to choke holds. Your art is based on chokes and you are famous for them. I wish to test both you and myself”.

We were all rather surprised at this claim as every strangle we ever experienced felt extremely effective and impossible to resist. Mr Gracie asked, “Let me get this straight. You are saying that if I start with a fully locked in chokehold, it won’t work on you?” The stranger looked back at him with a poker face and replied in a voice that conveyed serene confidence and mild disdain for our primitive techniques, “Yes – that’s exactly what I am saying.”

There was a long silence. The sheer confidence of the man was so astounding that even Mr Gracie momentarily looked hesitant to try. The stranger sat down in front of Mr Gracie, his back to him, and said, “take your favorite hold and do your best.” We all looked at each other and then the scene in front of us. Mr Gracie got behind him and applied his strangle hold and asked the stranger if he was ready. He raised his chin to allow the stranglehold even better access and calmly replied, “yes – are you?” If I told you, my faithful readers, that we had no doubt in our beloved sensei and his strangle, I would be a liar. Such was the confidence of this man that we were all wondering- perhaps he really DOES have access to some unknown skill or ability to renders strangles ineffective. Such was his serenity that even dear sensei, a man who had spent his entire life practicing the art of strangulation and never experienced a single failure, looked to have a shadow of self doubt in his eyes.

We all fervently looked on as sensei closed the strangle upon the stranger who sat with the calmness of a Buddha before him. Mr Gracie squeezed and the strangers face immediately showed the reddened strain of a powerful strangle. He grasped Mr Gracie’s forearm and tried to apply what looked like pressure point technique to the forearm muscles. His fingers started slipping as the strangle rapidly took effect and the stranger tapped out. We all looked at each other in what can only be described as a very awkward silence. Mr Gracie laughed and said, “well, you tapped – what happened?” The stranger looked shocked and bewildered. He immediately stated that no one had ever successfully strangled him and that Mr Gracie must have some kind of special invulnerability to his secret technique.

Immediately Mr Gracie had all of us strangle the stranger in turn. By the end the poor fellow looked like he had run back to back NYC and Boston marathons while smoking a carton of cigarettes and drinking a shot of bourbon at every mile. It was clear that any properly applied strangle even from a white belt, was one hundred percent effective on him and the mysterious art of the stranger was one hundred percent INEFFECTIVE on strangles.

As silly as it all sounds now, it was a valuable early lesson to us on confidence. We must be very clear about the BASIS of our confidence. Confidence based upon empirically supported ideas and skills is one of the pillars of successful action, both in life and in combat. Confidence based upon conjecture, hearsay and unsupported claims that go against what we normally observe to be the case, is worse than useless – it is positively harmful – as it will give us the confidence to act, but not the proven technique to succeed.

Reflections on my sensei: When my sensei, Renzo Gracie, first moved permanently to the United States, jiu jitsu was in…