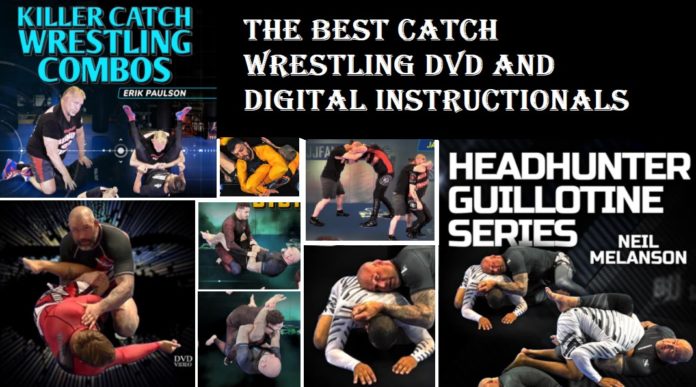 Catch wrestling would probably be a lost art for the most part if it wasn’t for Brazilian Jiu-Jitsu. This crazy style of grappling is among the styles that gave birth to BJJ in the first place anyway. While catch wrestling is far from being refined and as ee elaborate as BJJ, it does offer some awesome techniques and concepts that other grappling martial arts simply lack. This is particularly true when it comes to submission holds of all varieties. I’d say that for anyone looking to become a BJJ black belt, learning some catch wrestling is a must, and with our all-time greatest catch wrestling DVD instructional collection you can achieve just that.

Catch wrestling is really a grappling martial art like no other. Actually, it is not really an art, and not really a sport. It came about as a pastime for British sailors and was later taken to new rights at carnivals where all the crazy submissions appeared. Later on, people practiced it as a sport, and some of the greatest grappling names of today, like Neil Melanson and Josh Barnett, are highly proficient in it. In fact, you’ll find their work among the best Catch Wrestling DVD instructional on our list below. Enjoy.

IT is not hard to figure catch wrestling out. you clinch up with someone, take it to the ground (preferably), and figure out the fastest way of submitting them.No positional play, no stalling, just pure submission hunting. While this sounds like the perfect grappling style ti had its flaws – submissions were not too difficult to get out of if you didn’t get surprised by them.

This is exactly why this grappling style is the perfect complement for Brazilian Jiu-Jitsu. In art that favors positional control but has submissions as the end goal, more ways to tap people out are always welcome. Moreover, there are some aspects of catch wrestling that are really tailor-made for Jiu-Jitsu, even though they’re considered illegal in wrestling. The Shultz headlock and Mizzou choke area a couple of perfect examples that spring into mind.

That said, learning catch wrestling from a bona fide coach nowadays is quite hard. However, with all the digital content out there we do have access to some ultra high0-level lessons in the form of catch wrestling DVD instructionals. Sparing you the painstaking job of trying to track them down, we have each and every catch wrestling DVD worth considering in our list below, along with a bonus top 5 list if you don’t quite know where to start.

The following 5 catch wrestling DVD instructionals are really the creme of the crop when it comes to widening your BJJ knowledge pool with information from other grappling martial arts. Not just that, but the[people presenting the information are grappling legends as well.

1. Cradle of Filth by Neil Melanson

The cradle is a staple position of wrestling which comes in very handy to pin people. However, with a bit of flair and creativity, you can take it to a whole new level. Neil Melanson certainly has, introducing a lot of submission grappling and BJJ aspects to this crucial wrestling position. Check out the end result is one of the grappling DVDs that everyone involved in BJJ has to own.

Also mentioned above, Josh Barnett really needs no introduction. From the Pride to the UFC, he has had a crazy MMA career, while also doing some very high profile grappling matches along the way. His victory over Dean Lister with a catch wrestling chest choke is the first the comes to mind. Well, you’ll find not just that technique, but a whole host of others inside this amazing DVD set consisting of three volumes.

Another legend of catch wrestling is Japanese MMA fighter Kazushi Sakauraba. The man who submitted several Gracie family members in their prime shares his catch wrestling secrets and concepts in a three-volume DVD set that is a real gem. There’s no previous instance of Sakuraba sharing so much crucial information about his game so picking up this one is a no-brainer, really.

Erik Paulson is another grappler of Neil Melanson’s mold. He combines all possible grappling martial arts into ultra-effective systems, and his roots are in catch wrestling. As such, his killer catch wrestling combos DVD is a real gold mine for BJJ submission hunters that only care about the tap. There’s not just a whole bunch of crazy subs in three volumes in this catch wrestling DVD, but also some interesting ways in making people uncomfortable.

Once again, Neil Melanson. He really is the face of catch wrestling in the modern grappling world. And there’s a good reason for it – his stuff works! This four-part instructional should really be mandatory for everyone that earns a BJJ blue belt! All the key catch wrestling stuff that is efficient, Neil adapts to the needs of BJJ, and has the mall reorganized neatly in this DVD!

List Of Every Catch Wrestling DVD Instructional Out There

But why stop there? Let’s take a look at every catch wrestling DVD instructional that is around, and how they can help you become an overall better grappler, both with and without the Gi.

You’ll see a lot of Neil Melanson’s stuff in this article, simply because nobody understands catch wrestling from a modern perspective as he does. That said, he has it blended with some original positions of his, like the shoulder pin guards system.

One of the best Neil Melanson DVDs, if you ask me. The ground marshal guard is an amazing way of expanding on the closed guard from a catch wrestling, submission-based perspective.

4. The Filthy Kimura by Neil Melanson

As proven by Sakuraba, the Kimura is one of the best moves catch wrestling has to offer. Here’s Neil’s take on a very filthy variation of this iconic grappling submission hold.

5. The Snap Guard by Neil Melanson

The snap guard is yet another crazy innovation by Neil Melanson, once again filled with submissions from start until the end.

The shin whizzer is something that you’d probably say is “out there” at first glance. While it initially seems so, it’s one more of Melanson’s magically effective catch wrestling DVD instructionals that will change your game.

Catch wrestling wasn’t all about submissions. They work better when someone is on the ground, so the system has its fair share of unusual takedown options as well, which you can now learn thanks to this DVD.

Fujiwara is another hugely popular Japanese pro wrestling name who has a lot of catch wrestling knowledge. His “Shoot fighting submission system” is just what you need to really deepen the pull of match ending moves for BJJ.

Finally, another Kimura focused catch wrestling DVD. This time it is Harry Grech that shares his experiences and advances with the double writ lock, as it was originally named.

Catch wrestling can make you better at BJJ. It is just as important as Judo and wrestling are for becoming a complete grappler. The trouble is finding people that actually know this style to learn from. that is where to catch wrestling DVD instructional comes into play, offering you all the secrets of this style in digital format!