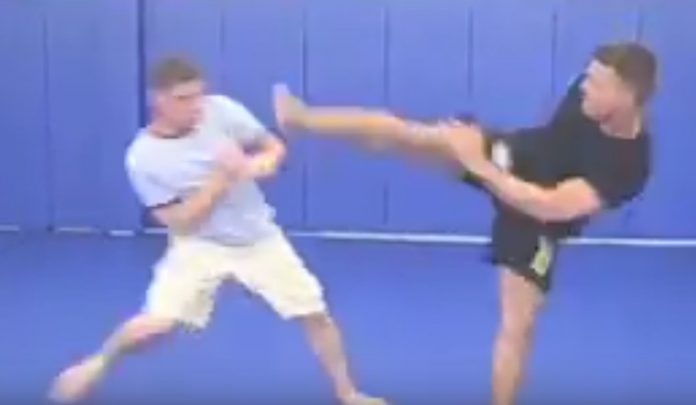 Guy with ten years of Kung Fu training walked into the Renzo Gracie Academy in New York to challenge someone who trains BJJ as much as he trains Kung Fu.

They were fighting for several rounds and every time BJJ guy won. You can even hear Renzo Gracie saying to his fighter to use only takedowns and submissions while the Kung Fu guy was still able to kick and punch.

UPDATE: Derek Featherston: Here’s the backstory for anyone interested.

“So he was in New York working with a “client” who attended this men’s class. The guy knew Todd was a bodyguard and asked his background. After Todd explained, he says, in front of the client, ‘well what you do is like grade school and this is like college’.”

“So he’s insulting him in from of a paying client. Todd says well there’s only one way to find out, we should just fight. The guy says oh well we do eye gouges etc. Todd says you can do whatever you want. Then it’s, well we can’t here, insurance, etc. Todd says ok we can go somewhere else.”

“Renzo is a friend and across the river in Jersey. Todd calls him on the phone and asks Renzo if they can fight there. Obviously, Renzo is down so he tells Todd to stay put he’s on the way to pick him up.”

“Now imagine being this poor bastard, you’ve talked yourself into a corner and The Renzo Gracie is on his way so you can fight at his place.”

“The best part: Todd said Renzo pulls up, jumps out of the car, and says ‘where is this stupid karate mother fuck’.”

“So they go to Renzo’s and this is what happened. Renzo even tells Todd (don’t think you can hear it on the video but it did happen) not to punch or kick after a few taps. Priceless. Todd Fox = legend.”