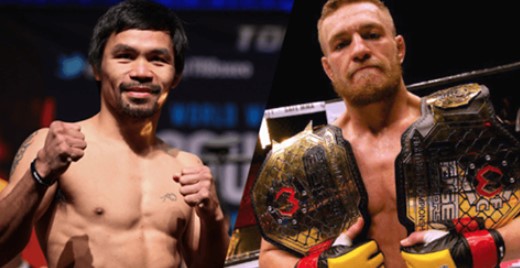 Boxing legend Manny Pacquiao confirmed that preliminary negotiations are underway for a boxing match against Conor McGregor in April, 2018.

Here is the report from Skysports

Manny Pacquiao has revealed he and Conor McGregor have held preliminary talks about a possible fight in April.

Pacquiao, a senator in his native Philippines, was asked on Friday if he had approached McGregor’s representatives about a fight.

“Initially,” Pacquiao said. “But we have not yet had any follow-up conversations.

“If we can negotiate it, I have no problem. It is OK with both of us.”

Last month, Pacquiao took to social media with a message that appeared to hint at a match with McGregor:

Pacquiao, who turns 39 this month, lost his WBO welterweight title to Australian Jeff Horn in July, having come out of retirement in 2016 to take the belt from American Jessie Vargas.

McGregor has not fought in MMA or boxing since losing to Floyd Mayweather by a 10th-round technical knockout in their bout in Las Vegas in August.

Pacquiao, who has won eight world championships in different weight divisions, stressed McGregor is just one of many possible opponents and the fight has to happen during the Senate recess in the Philippines:

“It depends who they can finalise as my opponent by April,” he said.

Conor McGregor May Be in Trouble With the Mafia