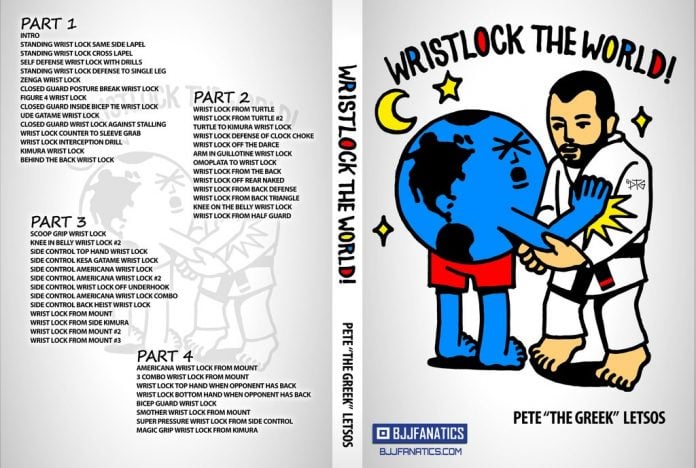 If there’s one family of submission holds you can rely upon in Brazilian Jiu-Jitsu, it is wristlocks. you simply can’t go wrong with a wristlock. ti si as simple as that. However, as simple and straightforward as wristlocks might seem, they’re actually highly technical. What’s even more important is that they require timing and a degree of sneakiness. Luckily for you all of these are learnable qualities, meaning everyone can learn how to wristlock. All you need is the perfect guide, and it is now readily available. The best resource so far on the subject of wristlocks is a brand new Pete The Greek DVD by the title of “Wristlock The World”. Says it all, really, doesn’t it?

ON SALE HERE:
Wristlock The World – Pete The Greek

When doing wristlocks, two things are for certain. One is that you will get a lot of taps. The second is that people will hate you. Wristlocks are highly effective, but similarly to leg locks, they’re still considered to be dirty moves. The reason behind this is still unknown to me, as we’ve established by now that BJJ is all about tricking your opponent. Well, ti doesn’t get trickier than hitting a wristlock from just about anywhere. And, if you’re wondering how to do it, “Wristlock The World” is going to teach you. This four-volume Pete the Greek DVD covers just about every possible spot that you can wristlock someone from. Or better said, anyone.

Who Is Pete The Greek?

If you’re wondering who this Pete the Greek character is then you must be a BJJ newbie. Worry not, we’ll help you understand exactly why you need to get this Pete the Greek DVD, by uncovering who the man behind it is himself. For starters, it is enough to know that he is Carlson Gracie Jr black belt and one of the most versatile competitors of all time. And his real name, if you’re wondering, si actually Peter Panayotis Letsos. And yes, he is of Greek origin.

One reason you might not have heard of Pete The Greek lately is that he has bee na black belt since 2006. His greatest competitive successes came in the early 2000s, mostly when he was a purple belt. back then, he dominated the Gracie Invitational, Copa Atlantica and PAns, to name just a few of the high profile tournaments he’s been in. While he might not be the most active competitor nowadays. he has more than two decades fo experience in the sport and is a real authority when it comes to certain aspects of BJJ, like guard passing and wristlocks, for example.

Pete’s dedication was clear back in his early days. He went to Brazil to train for a few weeks when he was a purple belt. he ended up spending four years and trained with anyone and everyone, competing for what was back then a very strong Gracie Barra team. Upon returning to his native Chicago, he established the Rio Jiu-jitsu academy, under the Carlson Gracie banner, He still teaches there today, when he’s not releasing awesome DVD’s, like “Wristlock the World”.

“Sneaking” Your Way To More Taps

I really think that there’s no real need to address the nature of wristlocks as this Pete the Greek DVD really covers everything. Still, let’s take a brief look at one of the most effective families of submissions in grappling martial art in general. While people might hate on Aikido, we have to admit that some of those wristlocks they use seem really painful. In fact, there’s a blue belt at my academy that’s a black belt in Aikido. he has managed to transfer lots of his wristlock knowledge to BJJ, making him a really pesky partner to deal with when rolling. And you wouldn’t want to come up against him in competition, trust me.

Wristlocks are effective because of two main reasons. First up, they attack a really sensitive part of the body, which is the wrist. The wrists are actually not only sensitive but also pretty weak. This brings us to the second reason wristlocks work – they require next to no strength. Plus, they’re readily available from just about anywhere. The sneakiest thing about them is that, in Gi Jiu-Jitsu, people gripping you will actually open them up as attacks. That means they’re o real need for you to try and set them up. Now, imagine the advantages you’ll get from the “Wristlock The World” instructional, once you learn how to intentionally hunt for them on top of that!

To be honest. this is my very first Pete the greek DVD instructional. In fact, I have no idea if he has other releases before this one. that’s certainly something that’ I’ll be researching in the near future. However, for now, “Wristlock The World” is plenty of material for me for quite a while. Particularly as I’m just starting to discover wristlocks myself. While I had heard of the man, I had never seen an instructional, or a Youtube clip from him, fro that matter before. Suffice to say, Pete should be issuing a lot more DVDs if he is going to teach and explain the way he does in this one.

This BJJ DVD follows the usual pattern fo grappling DVDs. It has four different volumes, and each of them addresses specific subjects related to wristlocks. In the case of wristlocks, since most of the mechanics are fairly simple, it is all about setting them up. In that sense, every volume covers a different position, with from standing setups in the first, through the back mount and side control in the following two, all the way to some crazy combinations in the final one.

Volume one starts with a short intro that immediately heads into submissions. In the standing portion, it is all about understanding the grips that lead to wristlocks. Since these are pretty much the same on the bottom, you should really pay attention to this portion of the instructional. Both same and cross lapel grip setups feature among the first chapters of this DVD. From there on, things get a lot more interesting.

Pete shares some very useful setups, that include countering attacks with wristlocks, like the single-leg takedown, fro example. This is followed by a very intricate system of wristlocks from the arguably best position for them, – the closed guard. From braking posture with wrist locks to countering sleeve and collar grips with them, you’ll get more than a dozen options to surprise anyone from there. Plus you get a really great wristlock interception drill that’ll allow you to pinpoint your timing.

Volume 2 – Wristlcoks From Turtle And Back Mount

The turtle is one position that I’ve never really hunted for wristlocks from. However, the “Wristlock the World” Pete The Greek DVD really opened up some options for me. Particularly as I enjoy working the front headlock. In that sense, Pete offers wrist-locking options from guillotines, D’arces, and even clock chokes. In other words, the perfect addition to anyone with a half-decent front headlock game.

The second portion of this volume covers wrist-locking from the back. As if th back mount needed more submission attacks. When chokes and everything else fails, you can always turn to wristlocks. To that extent. Pete demonstrates how to get wristlocks off a RNC, off of grip fighting, rear triangles, etc. basically every possible position from the back has wristlock backups to it. A half guard wristlock both changes the subject, and wraps this second portion of the instructional up.

Volume 3 – Side Control And Mount

In the third installment of the instructional, it is time to explore top position wristlocks. Granted, this is not a common spot for setting them up, but that just makes this volume much more useful. A knee on belly wristlock chapter precedes the half dozen chapters that address side control setups. Among them, my favorite (at least so far) is the wrist lock off of underhook. The Americana setups are also very worth watching if you like to look for it from side control.

When it comes to the mount, wristlock opens a whole new array of opportunities. In fact, they not only work directly as a submission but also as ways to open up the opponent’s defenses. you see, when someone’s trying to defend a wristlock, they can’t simultaneously defend chokes or arm locks. And vice versa.

Finally, the part of this Pete The greek DVD that rally makes a bang. Here, Pete goes off the reservation showing some real Jedi mind trick stuff. If you really want to make enemies inside your academy, make sure you watch this volume over and over again.

Here, Pete starts with a 3 combo wrist lock from the mount, paving the way for the craziness that follows suit. The next few chapters address wristlocks from the back again – but this time, when you’re the one that has their back taken. Talk about a sneaky submission setup! And still, there’s more. One absolutely stunning setup si the smother wrist lock from the mount. This is one that every top pressure grappler in the world will love. A very neat and tight “magic” wristlock from a Kimura grip completes the “Wristlock The World” Instructional.

This Pete The Greek DVD is certainly a treat. In fact, it is one of those DVDs you use to indulge yourself. Mind you, this is not a shortcut to getting more taps. it is an unbeatable system of attacks that will help you establish your own game much easier. Moreover, “Wristlock the World” will offer you follow-ups and backups to whatever attacks you’re actually using. Even when you’re on the defensive, you’ll have ways of finishing a match without breaking a sweat. The only drawback is, you won’t make many friends by becoming such a proficient wristlock.

ON SALE HERE:
Wristlock The World – Pete The Greek

Wrist Locks BJJ – Sneaky Submissions That Nobody Can Defened