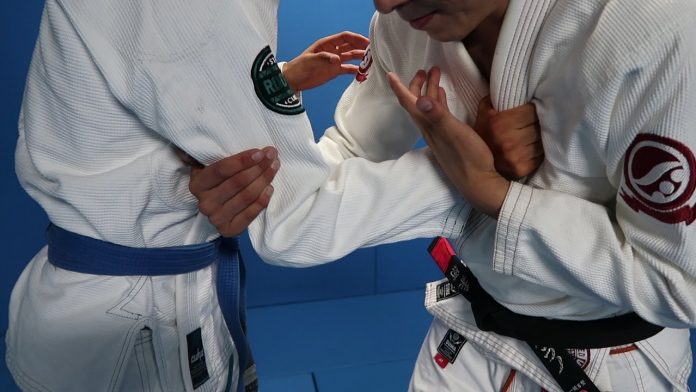 Gentle Art, as Brazilian Jiu-Jitsu is referred to, is anything but gentle on the joints of the body. The smaller and more complicated the joint, the worse it’s going to fare in BJJ. These weaknesses of the human body are the sole focus of joint lock submissions in Jiu-Jitsu. The armbar, for example, is a brutal submission, done on a straight limb, that hyperextends the elbow joint. The Kimura, on the other hand, is a bent limb submission that tears the shoulder joint apart.

Despite both of these being among the highest percentage submissions, their execution requires proper positioning and timing. While BJJ does emphasize control over snap submissions, getting a quick tap is sometimes exactly what is needed. In that sense, sneaky submissions are the best way to go. And, it doesn’t get much sneakier than wrist locks!

Speaking Of Sneaky, Here Are Some Leg Locks: https://bjj-world.com/leg-locks-ultimate-guide-positions-submissions/

Wrist locks are often associated with traditional martial arts such as Aikido and Japanese Jiu-Jitsu. That said, there is an often question mark over the efficacy of the technique in BJJ. When grappling, however, wrist locks can be a very important addition to your current submission arsenal. People often scoff at wrist locks, saying that they do not work on resisting opponents and that they are a waste of time. That could not be farther from the truth. Unlike some other submissions on arms and shoulders, where someone strong can use their strength to escape, wrist locks take very little to submit to. The wrist is quite weak, and pressure upon it can be very effective.

For many grapplers, the wrist is a weak point that can be attacked easily. They play an important part in opening up a more conventional submission, like the armbar, for example.

The hand/wrist complex is comprised of a multitude of intrinsic bones, muscles, tendons, and ligaments. The wrist complex is an amazing structure that forms many movements and ranges that adapt to touch, as well as stress. Due to the complexity of the wrist, it is possible that injury can occur, whether it is traumatic or chronic. To better appreciate the wrist complex, understanding your basic musculoskeletal anatomy can guide you in identifying problems associated with pain, discomfort, and loss of range.

The wrist is comprised of eight irregular-shaped carpal bones that are more like oddly shaped rocks. Conveniently, these bones articulate with one another seamlessly when there is no trauma or abnormal wrist patterns. Other bones that play an integral role in the wrist are the distal ends of the ulna and radius, along with the five metacarpals. These are the long bones that make up the forearm and the hand bones, respectively. Unfortunately, due to BJJ submission techniques, in addition to a fighter’s position of constant hands on the mat, chronic injuries are common within the sport.

How Wrist Locks Work In BJJ

To secure any position while grappling, you need a least one grip. The vast majority of grips involve the use of the hand, most often on the wrist. To escape any position, you need some sort of grip as well. Grips help to temporarily control your opponent or training partner while you apply a move. The wrist is one of the weaker joints in the body.  It is mobile in all directions but that range of mobility is still limited. Once you can push it past that range, it becomes very fragile.

Wrist locks are available anywhere where you can touch the other person’s hands. Granted, it can be readily defended in many positions. However, the act of defending any given movement can be in itself an opening to other attacks. Just because you’re not likely to finish the wrist lock from certain positions does not mean you cannot use it to transition to a better position or another submission.

A key disadvantage that BJJ has in terms of wrist locks is that there only a few are taught regularly.  A grappler looking to hone their wrist lock game is better suited to looking into some traditional martial arts. They can, however, be quite dangerous if done to unwitting participants. Keep this in mind and be careful when attempting them.

The next time you roll, take a moment to look at your training partner’s hand positioning.  Try to wrap your hand around theirs and start playing with the bend of their wrist.  It doesn’t take much to execute a wrist lock and you can be very effective from anywhere. When you see that the other person can get out, start folding their hand towards their wrist.  Suddenly, their focus will be entirely on that.

For starters, you can attack wrist locks anytime and anywhere. Submissions can be hit from standing, from inferior positions, from neutral positions, and dominant positions.  As long as you understand the dynamics of the wrist, you can use the wrist lock. It is the proverbial jab of Jiu-Jitsu.  It’s always good to hunt for it while at the same time setting up other submissions.

Wrist locks work very well from the triangle choke position, for example. The wrist lock is so easy from here that it is almost silly. When they are defending the choke, you can use both of your hands to press down on your opponent’s hand, locking out their wrist and get a nice finish. For anyone interested in wrist locks, start with this position. Here is a nice little video showing the wrist lock from triangle:

Wrist locks work especially well from top positions such as mount and side control. They also work as a submission to flow into other top submissions. It doesn’t matter if it is an armbar, a Kimura, or an Americana. From any of those subs and their positions, the wrist lock is there.

Become A Master Of The Mighty Loop Choke: https://bjj-world.com/the-loop-choke-from-everywhere/

As you can see, wrist locks work to a great degree. Some people scoff at them for being lesser techniques, and some even see them as dirty. But that is because they have not yet realized the efficacy of a wrist lock. Start incorporating wrist locks into your arsenal. You will see that wrist locks are everywhere. Don’t let preconceived notions of others play into you not using this easy-to-use, highly effective locks.