The BJJ Twister is a very nasty move that involves putting a lot of pressure on your spine. it is an illegal move under IBJJF rules and you most certainly do not want to be on the receiving end. However, it is a very effective submission and a potent weapon whenever the rules allow it. Why not have as many tools as possible in your BJJ toolbox? Well, the BJJ twister is an emergency situation tool.

The BJJ twister is not a submission for the faint of heart. it is one of the staples of the 10th Planet Jiu-Jitsu system. The always entertaining Eddie Bravo built much of his system around this painful submission. He did not come up with the move per say but adopted an old wrestling position to get taps in the most painful way possible.  Plus, it is a very attractive submission to pull off. No submission carries the wow factor quite like the twister. What you need to be wary of is the rule set you’re competing under. Many organization, especially in the Gi have a ban on the BJJ twister for all levels, black belts included.

In the submission only No-gi scene, however, the BJJ twister submission is fair game. The same holds true for MMA. The only problem is getting to the position and defeating the opponent’s defense. Entries to the position are not difficult but getting the submission set up might be. In order to get into position, you need to systematically break down your opponent’s defenses one by one. If you rush through it you won’t get it. Not that you’ll be much worse off, because you have both back control and the truck position to transition into. However, if the BJJ twister submission is your goal, you’ll need to pay attention to every detail.

How Does The BJJ Twister Submission Work?

The BJJ Twister submission was originally a wrestling move called “the wrestler’s guillotine”. Eddie Bravo’s wrestling background allowed him to introduce this move to his system. Originally people frowned upon the move but as Bravo polished it, it turned into a really formidable move.

The BJJ twister is a rotational spine crank submission. It involves forcing the opponent’s head towards one of their shoulders while twisting the lower body to the opposite side. Technically speaking, the submission with the BJJ twister is due to lateral hyperflexion of the cervical spine. Although many people perceive this as a neck crank it is actually a submission on the whole cervical column. Depending on their level of flexibility, your opponent can feel the effects of a well placed BJJ twister in multiple body parts. Tension and pressure can range from the neck, all the way through the spine and even in the shoulders, knees and abdominal muscles. Most of the pressure is, however, on the neck, thus landing the BJJ twister as a neck crank.

The basic idea is that you’re attached to one of your opponent’s legs with both of yours from back control. The next step involves you shifting towards the opposite side of the leg you’re controlling. You then need to trap the opponent’s arm on that side. To get into position, you must place their arm behind your back and turn towards your opponent. This lands you in the perfect position to get the BJJ twister submission.  To finish, simply get your arms around the opponent’s forehead and pull.

Getting To The BJJ Twister

The reason why the twister is rarely seen in Jiu-Jitsu competition is mainly due to the rules. So fare, there are a few examples of BJJ twister submissions in high-level MMA fights. It is also very effective on the sub-only scene, where rules are a lot less restrictive. The first and most memorable rendition of this submission live was that of the Chan Sung Jung. “The Korean Zombie” managed to pull off the submission flawlessly under the bright lights of the UFC. To this day this remains one of the most impressive BJJ Twisters submissions ever pulled off in a live fight.

Basically, you have two main paths to the twister. One takes you to the position from back control. The other one moves in the opposite direction taking you from the truck towards the twister. These are not the only two position that allows access to the BJJ twister but are by far the most effective. If you have seatbelt back control, first you’ll need to establish lockdown control with both your legs on one of the opponent’s legs. Once you have it, release the seatbelt grip and establish a baseball bat grip on the opponent’s arm From there, the twister is just a step away.

The opposite side path takes you from the legs towards the twister. From the truck position, you need to exchange control of the free leg with the same side arm of your opponent. Once you have the arm, make sure you’re not pulling on your opponent too much as you’ll end up in back control. Instead, focus on triangling your legs and pinning them in place while you battle to thread the arm behind you.

A word of warning – the BJJ twister can cause serious damage to your training partners! Even in a match, make sure you apply the pressure slowly and release the moment the opponent taps. In training, do not even consider going all out. If they don’t tap, release them. Injuring someone is not worth the tap when training. If you know the position, you won’t need to goal the way with stubborn people. After all, the damage is to the spine which can cause lasting injuries or even worse. On the other hand, if you’re caught in the submission tap. Do it early and live to fight another day.

As an example, famous UFC strawweight Angela Magan once took the stubborn path. The Ultimate Fighter Season 20 cast member decided she wouldn’t tap to BJJ twister submission in training. As a result, she ended up in a hospital with a cast over her entire torso. Not her smartest move.

That said, the twister is no more dangerous than any other submission when practiced right. Keep your mind open and give this move a try. Be cautious while training it and have a more experienced student or your instructor teach you how to correctly perform it. It is a mighty weapon that is going to serve you well! 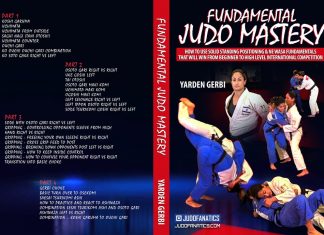 0
Yarden Gerbi is an Israeli Judoka who is one of the best grapplers in the world today. She is a highly regarded black belt...