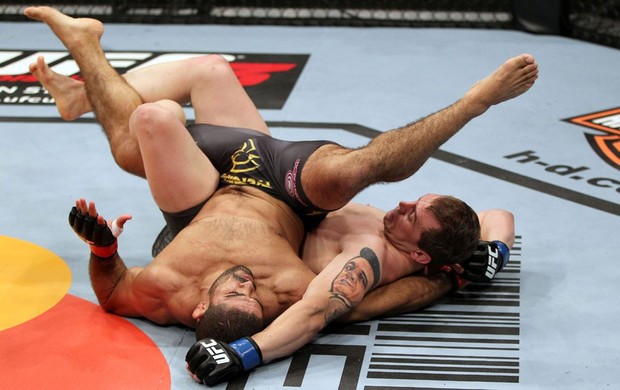 Eddie Bravo is an enigmatic character in the world of grappling. When it comes to his 10th Planet System, people usually react in a black or white manner. They either love it to the core or can’t stand it. There’s usually no middle ground. There are plenty of reasons for this behavior that stems from the fact that this system tends to be different from “traditional” BJJ. After Bravo beat Royler Gracie most of the Gracie family got mad at him. His unique approach to Jiu-Jitsu, including renaming lots of moves and completely ditching the Gi did not help his cause. Well, at least during his beginnings. Today, the 10th Planet Jiu-Jitsu system is a well-established one with associated gyms across the globe. The system seems to be extremely effective, especially in the areas that define it. One such innovative position is the BJJ truck, a 10th Planet classic.

The BJJ truck is not a new position in terms of grappling martial arts. It has its origins in wrestling, as do many of Eddie Bravo’s concepts. However, it is optimized for Brazilian Jiu-Jitsu and is one of the most potent attacking positions in the modern era of the sport. 10th Planet standouts like ADCC competitor and EBI champion Geo Martinez have specialized in the BJJ truck to a level of perfection. There are even instances in MMA where the position has proven more than useful. However, it remains one of those positions that are hardly on the regular curriculum of most Jiu-Jitsu academies. While certain people outside the 10th Planet system do experiment with it, the BJJ truck has yet to conquer the grappling world in its entirety.

A Look At The 10th PLanet Jiu-Jitsu System: https://bjj-world.com/top-10th-planet-jiu-jitsu-innovative-grappling-concepts-bravo-inside/

The Beginnings Of The Truck

Eddie Bravo used to be a wrestler before discovering the Gentle Art. Under the tutelage of the great Jean-Jacques Machado, Bravo developed his unique style by adding forgotten wrestling techniques to his evolving Jiu-Jitsu game. The wrestler’s guillotine, today known as the Twister among 10th Planet practitioners, was one of them. This position ultimately gave birth to the BJJ truck.

The truck is essentially a modification of the leg ride from wrestling. The leg ride is a move that was originally intended to open up defensive opponents in order to get a pin. As such, the Twister and Banana Split techniques were pinning position first and foremost. Leg rides were used to open up turtled up opponents and later pin them with one of these two positions. Leg riding provides wrestlers with great control, allowing them to mount immense pressure on the opponent while hunting for the pin.

The crucial concept behind the effectiveness of the leg ride, and conversely, the truck, is the figure four configuration of the legs. Locking in figure 4 allows for a grappler to control one of their opponent’s legs completely. From there, in terms of wrestling, it is all about pinning the opponent. The benefit of reducing the opponent’s possibility for movement is crucial in term of submission hunting as well. The BJJ truck allows submission grapplers to submit to the common wrestling positions. Eddie Bravo took this concept even further, perfecting the position for Jiu-Jitsu.

A Positional Study OF The BJJ Truck

The BJJ truck position can be considered a variation of back control. The advantage of this position is that it is kind of halfway between complete back control and mount. As such it offers easy transition back and forth between two of Jiu-Jitsu’s most dominant positions. Eddie Bravo is in the habit of calling these positions “dead zones” which I find to be a very fitting description. He has a few more apart from the back, the mount and the truck, but we’ll look at them in a different article.

Apart from being the perfect transitional checkpoint, the BJJ truck is a “dead zone” by itself. The control in the truck position comes from the figure 4 on one of the opponent’s legs that provides total control over their hip on that side. Since one anchor point is never enough for control in Brazilian Jiu-Jitsu, there are two ways of obtaining more of them. One is by controlling the opponent’s opposite side leg, thus rendering their hips motionless. The leg is easiest to control via the foot, but a banana split is also a great option.

Alternatively, control can be gained over an opponent’s shoulder, which is, in my opinion, better. The reason for this is that the shoulder you’re looking to control is the one placed diagonally of the hip you already control. This cross-body control (which is the secret behind the wrestling pin) allows for efficient immobilization of the opponent. The leg configuration can switch between the figure four and “lotus” position, depending on the situation. Both control positions are easily interchangeable, each opening different venues of attack and transitional opportunities.

From the BJJ truck position, depending on the type of control, there are two main attacking areas. When in control of both hips, leg locks are the way to go. In cases of cross body control, via the arm, it’s all about the twister and similar spinal locks. The back is attainable from both controlling positions, as is the truck in a vice versa manner. You could also go for the mount if all else fails, but I think that the back is a better option. For those more creative, there are also ways of getting into the 4/11.

Leg Attacks From The Truck

The most readily available leg lock from the truck is a calf slicer. This brutal submission is usually hard to get because opponents tend to wiggle out. The truck position offers the best control for finishing the slicer submission. The figure four configuration is actually just a tiny adjustment away from a full-blown calf slicing position.

When in the BJJ truck, it is essential that you control both legs of your opponent. When looking to finish with a calf slicer, this is even more important. For the submission, you’ll need to bend the leg you control via a figure four at the knee. While you do this, the aim is to place your shin as deep as possible behind their knee. The truck itself allows for a very deep placement of the leg.

Letting go of the opposite side leg at this point is most likely going to result with the opponent spinning out, leaving you on the bottom of half guard. So, you should either look to control the foot of their free leg or tuck it under your armpit. This will give you the control you need to reach for the foot of the leg you’re attacking and pull towards your chest while pushing away with the hips. Another key tip is not placing your free leg directly on your foot for the calf slicer. This can allow the opponent to look for an inverted heel hook on your leg. This is easily avoidable though, by using a triangle to keep your legs in place instead of pushing down on your foot.

Get The Calf Slicer From Everywhere: https://bjj-world.com/calf-slicer-underestimated-submission/

Another submission option is the banana split. All it takes is hugging your opponent’s near side thigh and pulling towards yourself while extending your legs.

The twister is a spinal lock that is a modification of the “wrestler’s guillotine” pin. The idea is to twist the spin of your opponent, placing immense pressure that results in a tap or very serious injury.

For the Twister, you need control over the arm that’s on the opposite side of the leg you’re controlling in the truck. The best approach is controlling the wrist with both of your arms. Once you have the wrist, push your near side elbow deep into their armpit. This is the “baseball bat position” which is essential for completing the Twister.

Entry into a perfect position for the submission involves you getting the arm you’re controlling up and around your head. Essentially, you want your head to come through the opponent’s armpit while keeping their arm behind your back. From there, all it takes is placing a grip with both your arms on the side of the opponent’s forehead and pulling back. Be careful with this submission as it comes to really fast and can cause very serious injuries!