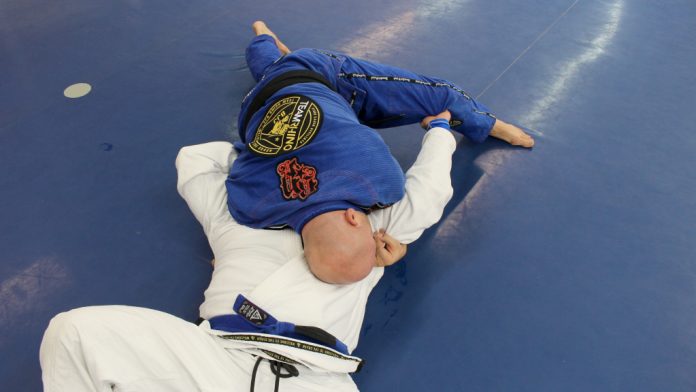 The one position that always causes amusement among non-grappling people is the BJJ North-South position. As funny as it may seem to the untrained eye, this position os a very advantageous one for the top player. It is notoriously difficult to escape and is as uncomfortable as Jiu-Jitsu gets. It has been proven to work in the highest tiers of competition and is one of the top submission hunting positions from the top. The positions easily connectable with every side control variation, allowing for seamless transitioning between them. This in turn oftentimes opens up attacks while preventing escapes at the same time.

The basic notion behind the BJJ North-South position is control over your opponent by proxy of the head. The positioning from the Nort-South is such that your hips and legs, which are the strongest part of your body, come up against the opponent’s shoulder girdle. In addition, it is quite easy to control the hips from there, which completely immobilizes opponents. In an attacking sense, there are plenty of different submissions available from the position. Today we’re going to look at lots of chokes and a few arm locking options.

This position is a variation of side control and you can easily move into this position if you’re in classic side control.  Usually, it’s easiest for the transition when your opponent tries to bring their legs underneath you. While the BJJ North-South position is considered distinct from side control, in terms of scoring, there is no difference. In the traditional IBJJF rules, just like side control, the position itself does not score any points. However, points come from the act of passing the guard. In the popular NAGA rules, in the No-Gi scoring system, North-South falls under the classification of a ‘side control variation’.

The BJJ North-South position is a very secure hold down to control a larger, stronger opponent. If you can secure your proper grips and apply your body weight, escape for your opponent is very difficult!

Choking From The North-South

North-South chokes are very high-percentage submissions that a grappler can finish from the BJJ North-South position.

The North-South is a very stable position to control a fresh, strong, thrashing opponent. But once you have secured the position and controlled your opponent…what do you do next? The North-South choke may start in side control and get sunk in during the transition to North-South with various setups.

in Judo, North-South is known as “Kami Shio Gatame” or North-South mount. Judo has developed this position highly, as it is possible to win by holding/immobilizing the opponent for 25 seconds. Judo legend Katsuhiko Kashiwazaki was known for his groundwork and demonstrates many different fine details of the basic North-South choke:

No one is better known for the North-South choke than MMA fighter and ADCC Champion Jeff Monson. Now Jeff Monson has some huge, muscular arms, but smaller guys can hit this choke as well. Big guns are not enough to get the choke, although it probably doesn’t hurt.

The question with the North-South choke is: How do you actually get into the submission position? Marcelo demonstrates his setup on how to get into the choke position. Marcelo also proves that one does not need Monson-esque arms to be effective with the choke!

Next, here’s a video that goes over three different finishing options for the North-South choke.  Often times grapplers will write off a move as “not for them” when in reality a simple variation is all that is necessary to make a technique work perfectly well for them. Try these variations and see which works best for you.

The bead cutter or paper cutter choke is another common submission from the position. It can also be set up from the kimura attack by trapping their own arm with their own lapel or belt. It is a very potent choke that can leave an opponent sleeping in just seconds.

The north-south position is a Mecca for attacking chokes, as we already saw. This is mainly due to the fact that you have the neck of your opponent at your disposal while they’re lying flat on their back. In instances, however, in which the opponent attempts to reverse the position, they often end up tilting to one side. Once they get into such a position, the top side of their body is open for attacking armlocks of all kinds. And all the while you retain the high level of control the position offers.

The Kimura from North-South control might be the number attack you can look for from North-South position. Check out this tricky variation on the Kimura shoulder lock where you “Lion Kill” your arms to make the lock

In the technique demonstrated below, you can see a perfect demonstration of sequencing and timing different moves. First, it’s the North-South choke and once the opponent defends, the next move is the armbar. It is pulled off at a very precise time that doesn’t give the opponent a chance to defend.

For all those small and technical people out on the mats that don’t rely on strength, wrist locks are a very useful attack. Since stronger opponents might decide to defend a North-South Kimura like they’re hanging off a cliff, it takes a lot of effort to pry the arm free. In such cases, going fro the weakest link in the chain is the best course of an attack. Although some people look down upon wrist locks for being sneaky and dishonorable, just remember that people hated on leg locks too. After the Danaher Death Squad, everyone is now desperately trying to catch up though. Who knows, you might end up pioneering this useful submission from the BJJ North-South position!

Everything You’ve Ever Wondered About Wrist Locks, Explained: https://bjj-world.com/wrist-locks-bjj-nobody-defened/