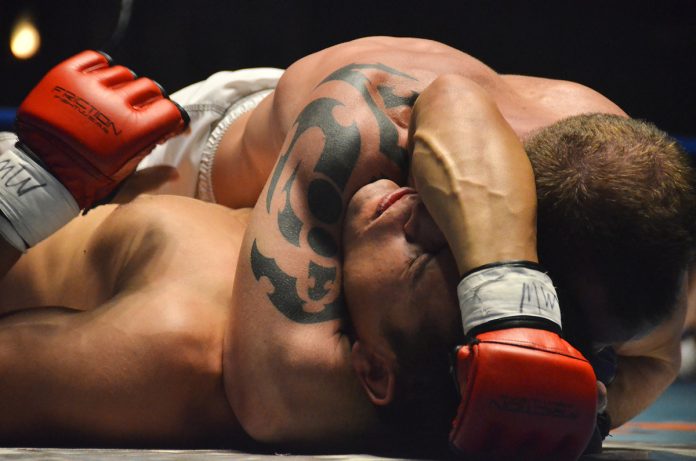 Everybody remembers their first. Submission, that is. After many, many taps the first submission I managed to pull off was a choke. Contrary to expectations (mine included) it was not a Rear Naked Choke or a Guillotine Choke. It wasn’t a triangle choke either. The first tap I ever got was due to an Arm Triangle Choke. The feeling that followed was amazing. It was as all those months of tapping out never happened. It didn’t matter that it was against a fellow white belt nor that it probably was full of flaws. I had my first submission and the Arm Triangle Choke went straight into the favorites category. Or at least I thought so. The next time I slapped one of those chokes on somebody was probably a couple of years later when I really decided to work on the Arm Triangle.

The Arm Triangle Choke is a really tight submission that works universally. Gi, No-Gi, MMA, catch wrestling, this submission is everywhere. It is tight, easy to get to, and easy to hold on to. As such it is usually taught at a fundamental level. However, people often tend to disregard it quickly and only come back to it when they advance. The Arm Triangle Choke is easy to combine in a system with guillotines and Brabo chokes, increasing its effectiveness for grappling. It’s a devastating move, one that isn’t easy but is also none too difficult to execute.

The Arm Triangle Choke is a Blood Choke submission that leaves your opponent strangled between their own shoulder and your arm. Similar to that of the traditional triangle choke, which is performed by the legs.

When done effectively, the choke will take just moments to take effect because of its ability to cut off the blood flow on both sides of the neck. With both arteries cut off, it only takes seconds until you get a tap or your opponent falls unconscious. For the most part, the Arm Triangle Choke is usually achieved while having top Side Control on your opponent. However, it is also achievable from the mount position, as well as the half guard position. Furthermore, it can be done from other positions but it takes a lot more effort and knowledge.

From the half guard, the choke is a little more difficult, because you need to pass the half guard to get into a better position. Ideally, you always want to secure your opponent’s head and arm. When passing the half guard, post your weight on your opponent and be as heavy as possible. The focus point of all that weight should be on top of their neck via your biceps and shoulder. This lands you in a prime position to gain the required leverage and angle to finish the submission.

From Top Side Control, the best way to finish the choke is to cut off the angle and walk your body up towards your opponent’s head. The angle that the choke creates will make it progressively tighter as you continue to walk your body up.

When you are in the mount with your palm down, you can also get the arm triangle very easily. Just slide your hand under your opponent’s head. The technique requires your opponent to drive their forearm into your neck to defend. As your opponent does this, ease the pressure briefly, and then push your arm through at the elbow.  Afterward, you’ll need to drop your head trapping the opponent’s arm against his neck. A very common mistake here is not dropping the head low enough. Your head should constantly be driving your opponent’s arm into their neck.

For the finish, grab your own biceps with the palm of the choking arm. A safe place to put your non-choking hand is the back of your head. Next windshield wiper your legs in order to dismount, and then sprawl out. Remember to keep driving forward on your toes to keep the weight focused on their neck. To complete the choke you just need to squeeze your arms.

In MMMA and self-defense scenarios the Arm Triangle attack from the bottom is useful as an easy way to counter elbows strikes. If you are able to slip to the side of an elbow,  you place yourself in a perfect position. Since their arm is already passed to the side, you just need to wrap your arm around the head.

Attacking from the full guard is a lot trickier than from the top. Eddie Bravo drills it a lot in the 10th Planet System as they stick to their concept of attacking from defensive and neutral positions.

When in your full guard you always want to break down the posture of your opponent. Doing so often puts you in the perfect position for the Arm Triangle Choke. From your full guard, you first need to pass your opponent’s arm to the side. Then you need to trap their upper arm between your head and your biceps.  Your right arm should be fully wrapped around your head and arm, primarily for control purposes.

Now, finishing from the guard is the most difficult part. If you can lock in the choke tightly, you can apply the pressure from your upper body. Open your guard up and place your foot on the side of the choke on the hip of your opponent. Push off, creating separation, and use a single butterfly hook to elevate your opponent. Then using your free leg, come over the top of their leg in a scissor motion. If done correctly, you should end up in half guard with the choke in all set to complete. As a bonus, you also get points for the sweep.

Learn the Secrets Of The Reverse Triangle Choke