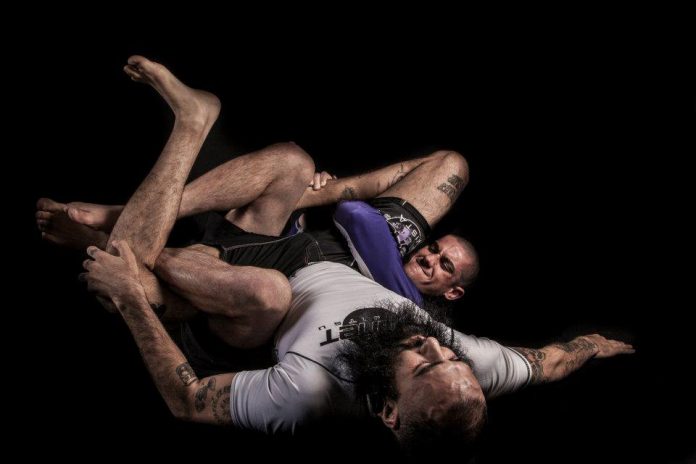 When we think of submissions in Brazilian Jiu-Jitsu, we primarily think of a few categories of moves. The main few are strangles, joint locks, muscle compressions, and spinal locks. In those terms, these submissions stem int subcategories that give birth to other subcategories etc. For example, a joint lock subcategory is an armlock and a further subcategory would be a bent-arm lock like the Kimura. IN the category of joint locks, most people tend to focus on either arms or legs. While with the arms, grapplers usually divide their focus among the three joints, the legs are different. While most people go for ankle and knee locks all the time, the hips are often skipped. The banana split submission is just one example of how efficient hip locks can be, so why do BJJ people shy away from them?

What Is Banana Split Submission

The banana split submission appears very easy until you give it a try. Once you find yourself in a position you’ll see how much details make the submission. Once you get it right, though, there aren’t many submissions in grappling martial arts that are more effective. So, how does this brutal move work?

The primary idea behind the banana split submission is pulling the thighs of both legs in opposite directions. Before we get into control and specific execution, though, let’s discuss angles and direction. In terms of direction just pulling the legs in different ones is not going to provide you with a submission. The hip is a multidirectional joint that is quite adept at an end-of-range movement. There is, however, an angle that is often problematic even for flexible grapplers. Opening the hip laterally, or away from the crotch is the only direction in which you can cause damage to the joint structures and surrounding muscles.

One thing to keep in mind though is that just pulling one leg, even in the right direction, is not going to do anything. The hips work in unison so if you have insufficient control over the opposite leg, it is just going to tag along. In order to complete a banana split submission, both legs need to be pulled in opposite directions. The truck position is the best option for controlling someone while setting up the banana split. In short, you need to lockdown one leg with both your legs, so that you can use both your arms on the opposite leg. The goal is to have two of your limbs against one of your opponent’s on each side.

Entries Into The Banana Split Submission

Entries into the banana split are very similar to those to the truck position. The distinction is in the way you grip the leg of your opponent. In the truck, usually, the control is at the end of the lever, on the fingers of the foot. This control allows for transitions to the twister, back control or attacking with a calf slicer. Since the banana split has different mechanics, the entries are slightly different.

The best way to enter into the truck and directly get a banana split is from turtle. When an opponent is turtled up, the goal is to thread one of your legs inside, much like a hook for back control. In cases when this is not possible, you can always thread a knee in and readjust later on. YOur arms go directly around the opponent’s thigh on the far side. From there just sit back, lock your feet down and switch to an s-grip with your arms. The S-grip is superior to the palm-to-palm grip in terms of range of motion which is crucial for finishing the banana split submission.

Another option is from side control, by using Eddie Bravo‘s twister side control or hunting for a leg directly from a roll. Personally, I prefer entering from Twister side control, particularly from the Fishnet position. It offers complete control and makes the Granby roll much easier. Not to mention that it lands you directly into the banana split. From side control, sit in reverse Kesa Ggatame and hook the far side leg of your opponent with your bottom leg. Once there, grip the thigh of the leg that’s on the bottom. Then pull yourself towards that leg, rolling over your shoulders and extend your legs.

How To Submit Even The Most Flexible Grapplers

Every now and then, you’ll come up against opponents that are insanely flexible. And by flexible, I don’t mean your regular butterfly stretch flexible, but more of Yoga Guru legs-behind-the-head flexible. Or women. Women are naturally very flexible which especially holds true for the hips. Whenever you run into opponent’s like this the main thing is to think about adjusting instead of abandoning the banana split submission.

The very simple adjustment here comes in the form of an angle. When you feel you’re reaching the maximum point of tension you can create in the submission without a tap, just change the angle. As with other joint locks, adding a twisting motion to a straight lock is almost always going to do the trick. In the case of the banana split, all it takes is twisting one, or in extreme cases both of the legs so that you accentuate the stretch. Just remember to twist both legs in opposite directions so that you add the maximal amount of tension.