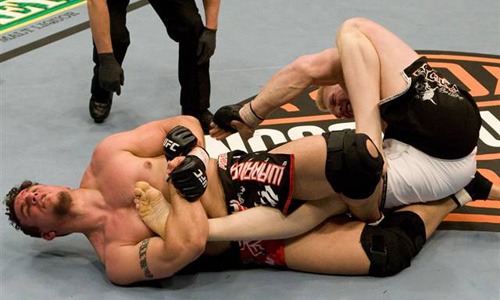 The kneebar is one of those submissions that gets a bad rep just because it is a leg lock. Kneebars are actually legal for brown and black belts and are among the best joint lock submissions you can get. Even better, a kneebar is available from a multitude of positions and can open up opportunities you never thought existed. Even if you’re a blue or purple belt, make sure you start learning how to execute the kneebar. See it as an investment in your brown and black belt future.

Simply put, the kneebar is the lower body analog to the armbar submission in BJJ. It works by applying force at the knee joint, in a direction opposite of it’ anatomical bend. The kneebar is actually a quintessential BJJ move. To perform it, you need to use your whole body against one isolated limb of the opponent. It is all about leverage and positioning, with a neat submission at the end. In all fairness, the kneebar is a really potent weapon that nobody should exclude from their arsenal. Even if you do not like to perform it, you need to learn it. Otherwise, you’ll have no hope of defending it.

Honestly, the kneebar is not that different from a heel hook, in the terms of potential damage. However, the crucial difference is the force requirement and global positioning during the kneebar. A heel hook takes next to no effort to finish with possibly devastating results. A kneebar requires a lot more force, and opponents and training partners can feel it coming long before it gets really dangerous. This joint lock puts a lot of pressure on you’re kneecap and can end a fight quickly. Practicing the kneebar requires common sense and following general safety rules. What you get in return is one of the most reliable leg locks in Jiu-Jitsu.

As already mentioned, the kneebar has the potential to cause very serious bodily harm. It is an incredibly versatile leg lock attack that you can use in competition. In No-Gi events, it is legal for all levels, while in the Gi and under IBJJF rules, only after the brown belt.

Training the kneebar should not be a dangerous undertaking. Actually, training it should not be different than training any other submission. The basic rules are easy: pay attention to what you’re doing and watch out for your partner. If you’re on the receiving end of the submission than make sure you tap on time. Actually, tap even before it is time.

It is important to keep in mind a few key details when training leg locks, and the kneebar in particular. To begin with, always make sure that you and your partner are attempting the move under the supervision of a qualified instructor. Do not go off attempting leg locks in your backyard with friends. That’s a great way to get seriously injured.

Even more important, understand that the kneebar does not only impact the knee. While the meniscus and knee joint ligaments are a target of the submission so are surrounding structures. In that sense, muscles like the hamstring can get thorn causing even worse injuries. Correct mechanics means that you’re minimizing the risk of injury, so pay close attention to how you should perform the move.

Finally, the kneebar is a gateway to plenty of other moves, mostly leg locks. Look to develop a complete game and include sweeps, passes, and other leg lock transitions off your kneebar attempts. That way, you’ll be able to train safer due to the fact you have opportunities instead of forcing just the one submission hold.

The knee is one of the largest joints in the body. Unlike other leg locks, like the heel hook and toehold, the kneebar can be applied with a certain level of force behind it without any dangers to the partner’s limb. In essence, the kneebar is a fairly safe and simple submission when you execute it correctly.

As with all other leg locks, the kneebar starts with correct body positioning. In other words, you need to obtain control over your opponent, before thinking about finishing. Ideally, you should have your body bent at 90 degrees in the knees and hips, respectively. This is the position that allows you to exert the maximal amount of power to finish the submission. It sets you up perfectly for a hip extension with a backward lean movement. To make more sense of the position, it is the same as with a basic BJJ bridge, only you’re on your side instead of your back.

Whenever you’re looking for a kneebar, make sure you do not have your body straight before you look to apply breaking mechanics. To really get the submission, look for the power position first. That way, there’s much more space to arch back and put your hips into the motion.

Another very important point is gripping. The foot of the opponent’s leg needs to be as close to you as possible. Actually, you need to have one arm around it and the fingers of the foot by the side of your neck. Placing the leg under your armpit is also a good finishing position. Head position is also crucial. For a tight kneebar, you need to use your head to trap the opponent’s foot on the bottom side. This allows for rotational control and results in pressure loading on the leg.

The kneebar is a very versatile move that you can look for from virtually anywhere. From standing, through top position all the way to the guard, you can always set a kneebar up. The basic idea is to have a clear path so that you can correctly align your body with their leg. Once you see a potential route to the power position, you can think about hitting a leg lock. Let’s look at a few different setups from different positions.

This is probably the most common kneebar set up out there. Getting the kneebar from top half guard is actually not hard at all. Your opponent is the one that’s going to guide you towards the submission, all you need is to recognize when to transition into it.

From the half guard, top or bottom, you just need to know which leg you’re attacking. For a kneebar, it is always the opposite side leg of the one that you have in the guard. From the top, all it takes is a little step over with your free leg and a semi-spin. An opponent looking to sweep or underhook is only going to make this easier.

Whenever you’re up against an open guard you can go for the kneebar. It works best against open guard variations which include one leg on the outside. The De La Riva is a great example of this. Just like with the kneebar from the top half guard, you need a spin. Here, the spin is a little bigger, which means you’ll really need to drill it order to hit the kneebar efficiently.

This attack is extremely direct. In the worst case scenario, you’ll end up wit ha sweep. That means you cans still hit a kneebar but from the top. Whenever in the bottom of half guard, you once again need to attack the free leg. The idea is to take your knee shield leg over to the other side of your opponent. You’ll need to thread it past their hips. next, you need to invert in order to get the opponent’s weight over you. From there you’re already in position. You can either spin under or to your side and you’ll get teh tap!

The X-guard is one of the best positions for attacking the opponent’s legs. The position itself places you directly under your opponent. Furthermore, the control you have is over both legs, so you can choose whatever attack you want. For the kneebar, you’re going to look to attack the leg you’re controlling with your arm and shoulder. Simply get one foot off the opponent’s leg, and swing it over their other leg. The submission is just a little spin away. remember to go over your shoulder, so that you keep your neck safe.

This one is the most popular kneebar setup in Sambo. The Victor roll is a great option to get both a takedown and a submission right away. You’ll need to be at the correct angle, so it works best off failed judo throw attempts. It is also very effective when an opponent slides behind you on the feet. As long as their arms are around your waist, you can hit the Victor roll kneebar immediately. It works at the highest levels of competition and is especially useful in No-Gi.