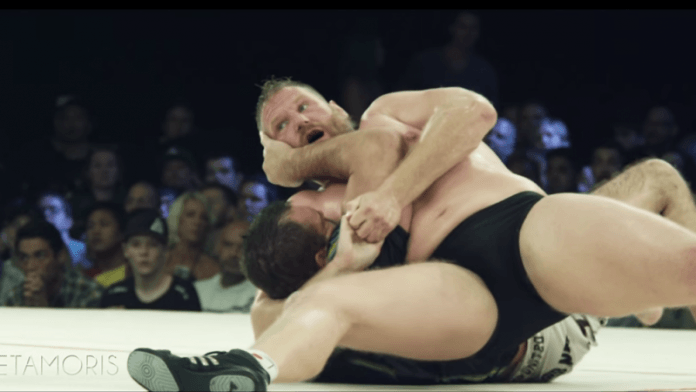 The line between a BJJ choke and a Neck Crank is a very thin one. It is not uncommon for a choke to turn into a Neck Crank. In fact, it is so common that in most cases, a choke turned in a Neck Crank is not considered illegal, even though cranks are. Learn how to recognize when your choke is headed into the crank territory and how to prevent it…if you really want to.

Choking is the ultimate way to finish in Brazilian Jiu-Jitsu. There’s no bravado or endurance when it comes to choking. If you’re caught in a tight choke, tap. You won’t like the alternative. Given the power of the choke, it is no wonder that there is such variety among choking techniques. Chokes are the highest percentage of submission in both grappling martial arts and MMA. But what happens when you can’t finish a choke? You messed up somewhere along the way and there’s no choke no matter how hard you try. Do you give up or turn to the choke’s next-door neighbor, the Neck Crank?

The Neck Crank is a brutal spine-twisting submission that is illegal at all belt levels under IBJJF rules. That is when you’re going straight for a spinal lock without a choke. Cover up your Neck Crank with a choke though, and you have a “cheat” move for competition. Ruleset aside, the Neck Crank is a very potent and efficient submission. However, it is very important to be aware of what you’re doing, because it is a potentially debilitating hold. If you like to use cranks in cohort with your chokes, make sure you do them correctly. If you want to skip them then you have to recognize when a choke is no longer a choke.

When we train BJJ and go for the neck, the goal is mainly to choke our opponent. We already got that out of the way. In cases when the opponent is resisting the choke, though things can go in two main directions. If the choke is properly applied, the opponent is eventually going to go to sleep.  A few small adjustments here and there and you have your choke.

The other direction is when you have the choke incorrectly, or the opponent wiggles out of it enough to prevent it from working. In a case like this, continuing to apply choke mechanics from a less than optimal position often results in a Neck Crank. A Neck Crank applies twisting pressure to the spine in the neck region, resulting in debilitating pain.

The problem with Neck Cranks is mainly safety. Chokes are relatively safe submissions since you can apply them to your partner in a realistic manner. Even when there’s resistance, there’s little to no fear of injury from a choke. Neck Cranks, on the other hand, rely on pain to induce a tap. A stubborn opponent or an overly enthusiastic submission attempt can leave someone crippled for life.

If your opponent in training is conscious enough and expects a neck crank at some point, they’ll tap early.  Nobody should let their partner twist on their neck, no matter how technical the attack is. But, what happens when you are applying this same neck crank in a tournament? Your opponent is winning on points, and there’s little time left. If it was a choke, they’ll go to sleep, but with a crank, you don’t have that option. So you’ll need to be very careful when applying the submission so that you do not take it too far.

A Choke Or A Neck Crank?

When is the precise moment when your choke actually turns into a Neck Crank? There are a few aspects to this you need to really understand. First are the mechanical nuances of the Neck Crank. Secondly, you need to know when a choke is past any chance of working, Finally, you need to be ready for a worst-case scenario reaction by an unaware opponent.

To begin with, a Neck Crank uses the leverage of the chin or the top of the head for a submission. Both of these points can allow you to twist the neck further than anatomically possible. From a Rear Naked Choke, for example, a Neck Crank is done with the chin as the main leverage point. From a D’arce choke, on the other hand, the twist comes via your body on the opponent’s crown.

Furthermore, in both cases, you need to be aware of when the choke stops working. Because, if you do not want to or can’t go for a crank, you’ll need to abandon the position. A seasoned opponent can defend the Rear Naked Choke very effectively without much movement. Playing the game of detail angles and grips can keep an opponent safe, even though you have a choke on. The same holds true for the D’arce choke, where the opponent’s body position can make it impossible to finish the hold.

Finally, you need to develop sensitivity in your body to feel how you’re positioned in relation to your training partner. This is one way to make sure your Neck Crank finishing percentage will greatly increase.  Ask for feedback from your partners when you train chokes, especially those that can turn into a Neck Crank. Head and arm style chokes are the most likely contenders here.

Sometimes, however, it is likely that your partner might choose a defense that actually turns a choke into a crank. The D’arce is a great example. Ther’s still a choke but also a Neck Crank.  When this happens you need to make a point of not giving up on the position. Stick with the move, and you’ll pull off one submission or the other. Since the movement had originated in a choke, you’ll still be cutting off blood flow. Furthermore, you can keep everything tight and get a crank as well.

One more example is the dreaded Japanese Necktie. This move is such a blend of a choke and a Neck Crank that even when you think you have a choke, you’re cranking and vice versa. Is it a good move to go for? Certainly. Just keep in mind the neck cranking aspect of it and use it to your advantage.