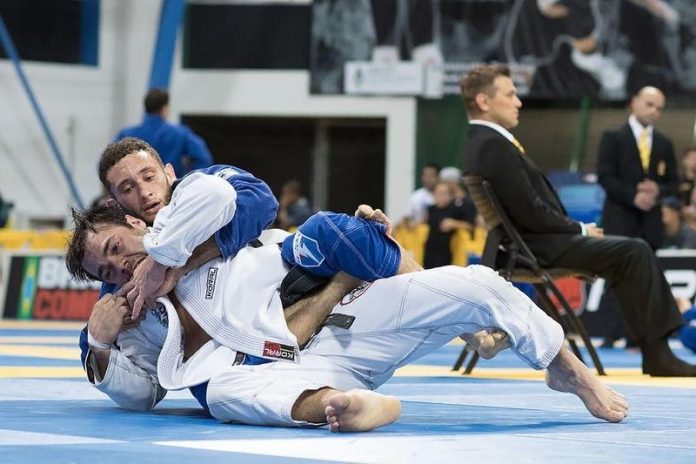 Grip Fighting from back control is a crucial aspect of a successful choking game. You need your arms to choke an opponent out, so you have to get them free. Follow the best, proven strategies to make sure you win the grip fighting and get the choke!

How many times have you failed to finish someone from the back position? Despite having the utmost control a BJJ position offers, finishing from the back can be notoriously difficult. Against inexperienced opponents, it is a piece of cake. Against people that know what to expect, though, finishing can be a real nightmare. All it takes is for someone to trap your arms and you’ll be in the struggle of a lifetime. It is a very frustrating feeling, having back control with seatbelt and both hooks in but no submission to crown your efforts. The key battle after taking the back is winning the grip fighting. In that sense, there are a few strategies aimed at winning this crucial battle that you need to master. The sooner you do, the better.

In general, people know what’s coming when you’re on their back. A Rear Naked Choke or lapel choke from the back are the two main contenders. All other submission options include a transition out of full Back Control. To win the grip fighting, you need to be ready for your opponent’s last-ditch defensive efforts. If you’re in the Gi, this can turn into a long-winded and frustrating battle. Before you go off looking to win the grip fighting, you need to understand the dynamics of back attacks. Just like most things in grappling martial arts, different back attacks employ different grip fighting strategies.

The back position is one of the top positions in BJJ. It brings a maximum of four points under IBJJF rules and has great finishing options. Provided you get your hands in position, of course. The back position is effective due to the safety it brings the person attacking. There are no direct counters to back attacks, meaning someone would have to escape in order to hope to reverse the tables. And this is no easy feat at all.

Back control starts with upper body control. Unless you have proper alignment and attachment, there’s no back control. This means having your body in line with the opponent’s spine. On top of that, you need a seatbelt (over/under) grip to control their shoulder grid. Finally, always keep your chest tight to their back and your head next to their head. Hooks are simpler – all it takes is getting your feet over the opponent’s hips, fingers pointing out. Now that this is clear, there are two main aspects of full Back Control attack-wise.

Grip Fighting From The Strong Side

The basic idea of attacking from the strong side of back control is having your opponent as near as possible to the choking arm. From a seatbelt position, getting to the side is not hard to achieve. Once there, though, an experienced opponent is going to focus on your grips. Choking is the most prevalent back attack so controlling your arms means preventing the submission. This is why grip fighting is more important than the mechanics of the choke itself.

When you’re on the strong side, the usual configuration is both of your opponent’s arms on your choking arm. In this situation, that’s the bottom side arm. However, dealing with the bottom side arm comes second, since you have to free up your top arm first. To do so, all you need is to peel off the opponent’s top side arm. All it takes is to slide your arm in and push down. Their grip is going to fail. It works in both Gi and No-Gi. Once you get the grip off, immediately go for their wrist. The goal is to take this wrist all the way behind their back. To do so, you have to open your top side leg and close it over the arm you have trapped.

2. Dealing With The Bottom Arm

Once you have one arm trapped, you have a huge advantage. Now it’s two of your arms against one of your opponent’s. To get your choking arm free, you’ll need your free arm’s help. use the free arm (underhook arm) to pry their wrist off your choking arm. The best way to achieve this is is to push their arm towards their hip. Focus on gripping right at the root of their thumb, and they won’t be able to resist. Once you win the grip fighting, immediately go for wrist control with your choking arm. The goal is to get their arm a far as possible away from the neck. To set a choke up, open up their neck by pulling their head with your top side arm.

Once the neck is open, simply release their wrist and sink in the choke. They’ll have no time to react before you figure four your hands. Going for a Gi choke, like the Bow And Arrow takes even less time. The choice is yours

When you’re on the weak side, choking is generally harder. It is not impossible, but the position allows your opponent o move more. At the same time, your choking arm is on the top where your opponent can manipulate it more. To make sure you tie up your opponent before you submit them, you need to win the grip fighting once again.