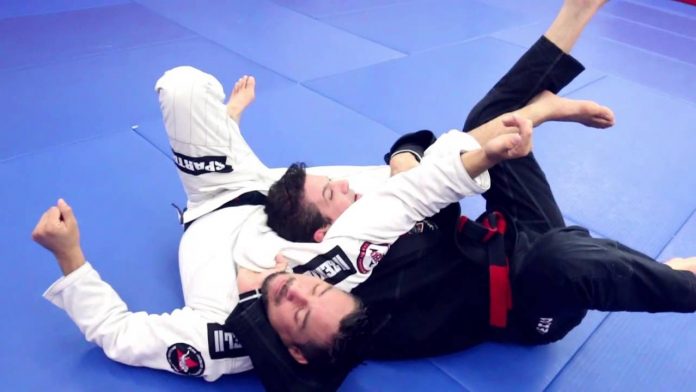 The Brazilian Jiu-Jitsu Gi is a mighty weapon for those that understand it as such. The Gi is a medium that allows a grappler to obtain dominant control over another grappler. In order to achieve this control, one must know how to correctly position their grips. Not all surfaces of the Gi are equally efficient in terms of gripping efficacy. The sleeves (at their ends and behind the elbows) and collars (between collarbone and neck) are the two favorite spots. Closely behind are bottom-of-the-pants grips. Every once in awhile, gripping the belt also helps in controlling an opponent. However, the Gi is not just a tool for control, it is also a powerful tool for submitting. While armlocks and leglocks with the Gi are a scarce and low percentage, Gi chokes are a huge category of submissions that all grapplers need to have at their disposal.

Gi chokes have been around since the inception of BJJ. They’re not uncommon in other grappling martial arts that utilize the Gi too. Some of the Gi chokes used in BJJ today have deep Judo origins. Some of them are still in active use in Judo competitions today. Gi chokes come in all varieties and work at all levels of the Gentle Art. They can be done with virtually every part of the Gi and are extremely tight, due to the material Gis are made of. Wrapping a lapel around someone’s neck is a foolproof way of getting a tap.

Contents hide
Gi Chokes Explained
Gi Chokes From Side Control:
A Lapel-Choking Game From The Back
Attacking The Turtle:

Lapel chokes (and all Gi chokes for that matter) are effective on even the best martial artists. However, most newcomers to the world of Brazilian BJJ often perform Gi chokes using the incorrect technique.

For example, If you have a shallow grip on your opponent ’s lapels, you should not try to pull on their them.  This will most likely not work and it will use up your grip strength, leaving you vulnerable to counterattacks. A better method is to get just one hand deep into your opponent’s collar. Look to grab the Gi material on the back of their neck. If you do this, the sharp part of your forearm and wrist will be on the neck of your opponent and you’ll be in a great position to cut off his circulation.

When it comes to using a lapel choke, the tighter your hands are and the deeper the grip, the better. If both of your grips are shallow, you will be unable to do much to your opponent. If both grips are deep, though, you have a great chance of finishing the choke and the match.

Gi Chokes From Side Control:

Attacking with Gi chokes can be done from virtually anywhere. There are a few positions, although, that offer the best advantage. From these few select positions, it doesn’t take much time to sneak a lapel through and set up a tight choke. Furthermore, you’re not limited to using only your opponent’s lapel. When in the correct position, you can easily alternate between your own lapel and that of your opponent, confusing them as to what your next move might be.

Side control is one of the top positions for hunting gi chokes. What many people fail to comprehend at the beginning is that side control is an extremely volatile and active position. In side-control, you need to be able to switch between a number of positions, from Kesa Gatame to North-South in order to control your opponent. All these transitions open up plentiful opportunities to finish the match with a Gi choke.

When your opponent sets up their frames from the bottom of side control, use the newly created space to free their far-side lapel. Pass the lapel to the cross face hand and transfer your weight to knee on belly.  From there, you grab the lapel with your front side hand and slide your hands together.  Switchback your hips and circle to apply the baseball choke. This is a great high percentage set up, but the finish is a bit difficult to get. Well, at least until you get the hang of it.

The first step is to isolate and secure the opponent’s near side arm. Next, you take their near side lapel and “punch” it across their body through to the hand you have under the neck. For this choke, your opponent manages to get their hand trapped when defending the punch-through. So, you go to knee on their belly and push forward so that they are facing away from you a bit. Then, with your opponent’s head and shoulders elevated, take your free hand and push your first into their neck. To finish, you need to pull their lapel with your other hand.

Start in top side control.  Your opponent is keeping their arms in very tight. So, you pass the far side lapel over (rather than under) their far side arm and grab it with the hand you have under the neck.  Get a good grip and with your free hand, keep your opponent’s trapped arm attached to his side. Having secured your opponent’s far side arm, you are going to use your hips and legs to isolate their near side arm as well. With both arms secured, you go to knee-on-belly while posting your front foot by their head.  Now, you can apply the samurai choke.  Since both their arms are trapped, your opponent can’t defend. This is one of the highest percentage Gi chokes you can pull off.

A Lapel-Choking Game From The Back

Back control is the traditional choking position in BJJ. The Rear Naked Choke is a Brazilian Jiu-Jitsu classic and is the first attack you think of from the back. There are, however, numerous other attacking options in terms of choking. And, a lot of them include the use of the Gi. So without further ado, let’s take a look at some classical and some unorthodox Gi choke options from the back.

Starting off with the classics, there’s nothing that screams Brazilian Jiu-Jitsu more than the bow and arrow choke. From seatbelt and hooks back control you first look to thread your arm inside the opponent’s lapel. The deep the better. You need to look to keep the elbow of the choking arm back sot hat there’s constant pressure. In order to get into finishing position, you need to tilt the opponent completely to the choking side. This is going to allow you to pull your bottom leg out and get into a chair-sit position. From there you grab the opponent’s pants with your free arm and sit back. Before you think about finishing you need to get your bottom leg over their shoulder, so that you kill all defensive grips they might have. From there on just spread your opponent like firing a bow and you get an instant tap.

This is a quite unexpected one. Set up from back control with seatbelt grip.  You pass your own Gi under the opponent’s arm and to the hand, you have over your their other shoulder.  You then fall to the same side where you’ve passed your lapel under your opponent’s arm.  Finally, use your leg to apply pressure to the opponent’s neck while pulling grip tight.

Set up from back control when the opponent is doing a good job of defending his neck. You sneak your own lapel over your opponent’s shoulder and pass it to the hand you have across their neck. You then thread your own arm through the grip and grab your opposite bicep. To finish you fall to the side you have the lapel grip and slide your hand down to your other hand. This is a really sneaky and high percentage choke. The key is not letting your opponent see what you’re doing when you make the first lapel pass.

The turtle is an old extremely defensive position that comes from Judo. There’s really not much you can do against an opponent that knows how to defend from the turtle position. However, if you know the basic concepts of creating openings, even the smallest space can help you go for undefendable Gi chokes.

This one is similar to the Chilean necktie except you set it up from top turtle position. It’s helpful if you thread your arm from outside in and secure you opponent’s cross side lapel.  Then you simply pass your own Gi over the top and switch grips from the opponent’s lapel to your own.  Then, much like the Chilean necktie, you use your own leg to pressure the back of opponent’s head/neck while pulling grip tight. This is a high percentage choke with a really sneaky setup.

When we talk about unorthodox chokes there’s probably the best instructional out there by Travis Stevens. Named, Chokes By Travis Stevens. It’s showing chokes as you probably never seen them before. It’s a mix of Judo and BJJ chokes and there is no better guy to show it than Travis Stevens is.

Travis Stevens is John Danaher’s Black Belt and Olympic Judoka, 2x Us Olympian in Judo and also BJJ 2x Copa Podio Finalist. In this Instructional he’s showing his best chokes and also the most common places that people get stuck in. It’s one of the easiest Instructionals to follow and It’s a very quick way to improve your BJJ choking game.

Check out this Instructional and the list of techniques here: “CHOKES” BY TRAVIS STEVENS