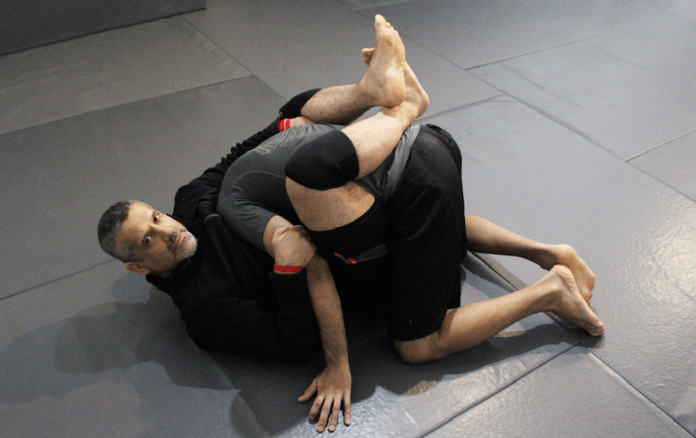 Not flexible enough to work rubber guard? Worry not there are still similar guard systems that you can learn. One such example is the BJJ Rat Guard. It is not one of Keenan Cornelius’ lapel wrapping excesses but a very effective closed guard system. The BJJ Rat Guard works in both Gi and No-Gi and is very underrated. Turn this into an advantage and learn the BJJ Rat Guard System!

Playing guard in BJJ is a must for grapplers of all levels. Regardless of your affiliation to Gi or No-Gi JiuJitsu or even your style of grappling, you need to have a good guard system. Even top players who thrive on takedowns and pressure passing need a fallback option. Jiu-Jitsu is very unpredictable and if one thing is for sure, it’s that you’re going to end up on your back at one point. As far as closed guard systems are concerned, the best approach is the simplest one. Break the opponent’s posture and you get control. The BJJ Rat Guard System does just that. It is an effective system that is foolproof. Wherever your opponent moves, you have options. IF your opponent stalls, again, you have options. So have at it!

Rest assured that the BJJ Rat Guard system requires no outstanding athletic ability or a specific body type. This is what makes it superior to advanced guard systems like the Rubber or Willimas guard. As an added bonus it works as a closed circuit of reinforced wedges that provides maximum control over the opponent. Since passing isn’t an option for your opponent, all they can do is succumb to a sweep or submission. Sounds like the perfect Jiu-Jitsu guard, doesn’t it?rat guard system

The BJJ Rat Guard system was originally intended for use in MMA. Its founder is a grappler named Rene Dreifuss. If you do MMA or Combat Jiu-Jitsu, then this is the only guard you need to be practicing. For pure grappling martial arts competitors, it offers a high degree of control. Even better, it allows you to control an opponent without exerting any energy at all, once you break their posture.

It all starts with breaking the opponent’s posture. If they decide to do ti their self, the easier it is for you. If not, though, a palm to palm grip around their neck is all you need from the regularly closed guard. Even collar grips when in the Gi are going to do the trick. Once you have the posture, swing an arm like you’re going for a guillotine choke. The opponent is going to stick to you even more, afraid of the submission. This is perfect as you actually want to grab your own leg on the opposite side, instead of going for the neck. Boom, you’re in the BJJ Rat Guard.

To control an opponent, look to further take away their movement by crunching in and hugging your free knee with your free arm. Just remember to keep this arm available to set up a grip on the opponent’s same side wrist.

The most obvious attack you have is a Kimura lock on the free side. All you need to do is establish wrist control so that you can attack at will. Remember to go for the wrist instead of the forearm or higher. The wrist provides the best leverage to control the whole arm of the opponent. Once you have control, set up a bend in their elbow. the closer to 90 degrees the bend is, the better. To finish the Kimura all you need is to release the arm that’s gripping your thigh and get the figure four. As a bonus yo do not need to hip escape and change angle for the finish. Simply push their wrist up and towards the back.

Once you get this a few times in training, opponents are going to start hiding their arm. Even with a wrist grip, you might find it difficult to open their elbow. When they squeeze their elbow close to their body, simply extend the wrist towards their butt. Once in full extension, use your leg on the same side to trap the arm. In case you’re still not seeing it, you’re all set for a triangle. Transition into the diamond position first, though because you might just get a straight armlock first. IF not, go for the triangle choke.

For a vicious neck crank attack from the BJJ Rat Guard, you’ll need to think about the opposite side arm. Form your basic Rat guard control, look for an opening in the arm on the side of the opponent’s head. Once you see it, release the control and thread your arm towards the armpit. Use a rear naked choke grip and you can finish the crank right there.

A Chain Of Sweeps

The simplest sweep to get from the BJJ Rat Guard System is a sit-up sweep. Contrary to what you might think, you can finish the sweep with the opponent’s posture broken. What you can’t do, is go for it with the opponent lying on top of you. If that’s the case, go to the submission subsystem. When the opponent tries to posture up though, do not try to keep them down. Stay in the rat guard control but allow them to rise so that you can use the momentum to pull off a sit-up sweep. The end position should be mount with a guillotine option right there. Even if you don’t hit a mounted guillotine, you could still finish with an arm-in one. Whenever the opponent manages to block the sit-up sweep, simply connect your arms under their chin. You’ve got a guillotine choke all set to go.

Another sweep you can hit is from the neck crank. When you get in position for the crank, just flip your opponent over to their side using the grip. Eddie Bravo calls this the 100 % as it works against anyone if you do it right. Once again, you have a mount and a submission straight away. BJJ Rat Guard System

There are three main avenues of movement your opponent might look for from the Rat guard. The system, however, has great answers for all of them. AS already covered,  an opponent (particularly stronger and bigger ones) might look to power through and regain posture. The only thing to remember here is to stay tight on them via the arm and leg control you have. Once sufficiently up, go for the sit-up sweep or the guillotine, depending on your preference. Even if you fail at a guillotine you can always go back to the BJJ Rat guard system from there.

Another common course of action is a stack. Many opponents are going to look to straighten their legs and use pressure to stack you. The main reason why the stack won’t really work is hip control. The position you have with the Rat Guard means that you have control over their hips and shoulders. That translates to very little pressure that they can apply to you. Standing up actually opens up attacking options for you. Once on their feet, the hips are sufficiently far enough for you to thread your butterfly hooks in.

The worst position you can find yourself in is the wrong end of a Tozi pass. For this, though you have to make the crucial mistake of not controlling the opponent’ s free arm. When they place their arm around your neck, you have to react fast or you’ll get passed. Switch your grips so that you have a palm to palm over the opponent’s shoulder. Make sure your elbow pushes hard against their jaw, to maintain a broken posture. Once there open your legs and go for a butterfly hook on one side. and end up in mount or knee on belly.

Rounding things off are transitioning into back attacks. There are two main directions to hit them from. One is from Kimura attacks, and the other from a neck crank.

When you have a Kimura slapped on from the BJJ Rat Guard, your opponent is either going to try and straighten their arm or hide it between their thighs. In the first case, use the extension to take their arm all the way behind your head. To do this, of course, you’ll have to release the Kimura grip. Once there, simply turn into your opponent and get the seatbelt grip.

When the opponent hides their arm between their thighs, they open up a transition to the Omoplata. However, if you can’t or do not want to finish there you can get the back. Simply swing your entangled leg over the opponent and you’ve got hooks. Get the seatbelt grip and you’re there.

Finally, when you’re in the 100% neck crank position you can opt to get the back instead of sweep or finish. Once everything is in place kick your opposite side leg out and pull the opponent towards you. Options include hitting the Twister submission or going for full back control.