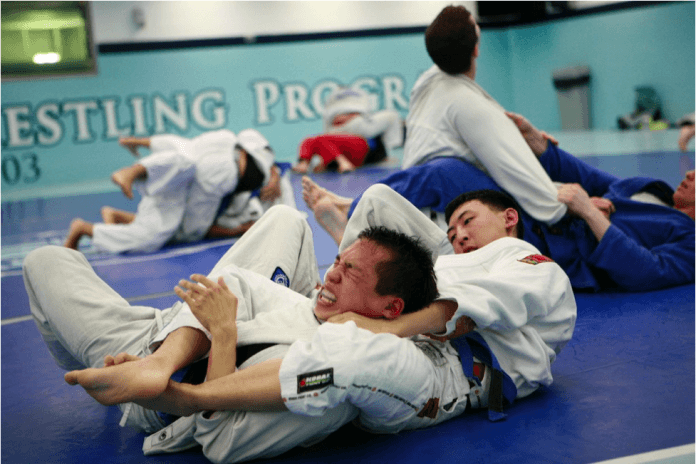 Whether it is a regular BJJ class, open mat, or a tournament two things are for certain. You’re going to see someone tap to a choke. You’re also going to see someone escape a choke that seemed tighter than a hanging noose. BJJ chokes are very effective submissions and are among the highest rate finishing moves in grappling martial arts. Their constant use and efficacy, though, have made them the subject of detailed studying. The result is plenty of options to defend, escape and even counter them. It is not uncommon to see a blue belt escape a brown belt’s choke after defending for a while. This demonstrates that no matter how experienced someone is, defenses are so efficient that even lower-ranked students can use them successfully.

If you’ve ever had someone escape a Rear Naked Choke, for example, that you thought you had, you know the feeling. First of all your confidence in the move gets shattered. Second, you might end up with tired arms and lose a match as a result. This often leads to reexamining choke mechanics and how they work. Now, it is important to understand that this is a normal cycle in BJJ development. What is important is recognizing the need to evolve your BJJ chokes. To that extent, there are certain principles, tips, and even tricks to ensure your submission success. All you have to do is make sure you follow the subtle rules of choking people unconscious.

Contents hide
Tips To Tighten Up Your BJJ Chokes
When Choking, Think Deep
It Is All In The Wrist
Either A Blood Or An Air Choke
Keep It Tight!
The 10 Second Rule
Related Articles:

Tips To Tighten Up Your BJJ Chokes

As far as the basics go, everyone knows that chokes come in two main varieties. The first is blood chokes when you cut off the supply of oxygen to the brain by compressing the major blood vessels of the neck. Others, known as air chokes, restrict the flow of oxygen to the lungs by compressing the larynx/trachea. In both instances, the goal is rendering a person unconscious. Thanks to tapping, this rarely happens in BJJ tournaments, and almost never happens while training.

Using BJJ chokes to the full extent of their power means being able to tap anyone, anywhere once you obtain the correct structural alignment. For that purpose, you must understand the anatomy of a choke. When performing BJJ chokes a grappler needs to use their arms, legs, the lapel, or any combination of the above in order to apply a blood or air choke to their opponent. All of these combination possibilities are the reason why BJJ chokes are so diverse and ultimately, effective. Let’s go over a few crucial tips to take your choking game to the next level.

For example, when you learn the cross collar choke from the bottom, new students often say that they can’t complete it. When that is the case, instructors are usually able to recognize the issue without even looking.  The usual culprit is the depth of placement of the primary choking hand. Namely, for the choke to work, the hand must be deep enough in the collar.

The cross collar choke is just one example of the importance of hand placement. The same goes for any lapel choke variation, apart from the loop choke. The basic idea is that the deeper you are, the less space your opponent has to insert their arms and defend. If you pay attention to this single detail your BJJ chokes will quickly become twice as effective.

It Is All In The Wrist

The majority of BJJ chokes are actually applied with the help of your forearm bones. To be more precise, the area that connects your palm with your forearm, at the level of the wrist. Placing this part of the wrist against the neck of the opponent’s neck cuts off blood flow to the brain. Think about a tight Marcelotine for example. Having your arm deep (the first tip) and pushing your wrist on one side of your opponent’s neck, straight into their carotid is going to result in a very effective choke.

With The Gi itself, it is usually easier to find leverage. The lapel or collar greatly aids the application of the sharp edge of the wrist to the neck. Moreover, the pressure that you can exert in this manner is far greater than without the Gi.  Think about doing a paper cutter choke from topside control. If you’ve ever attempted the move in No-Gi you know how hard it is to execute it. With the Gi, on the other side, gripping the collar is a game-changer in terms of pressure. This is why correct placement of the hand, as we discussed earlier, is so important.

Either A Blood Or An Air Choke

A guillotine choke, for instance, usually means applying pressure directly against the throat of the opponent. The goal is to constrict the airway in order to get the tap. This, however, is quite different than a strangle or a blood choke, as we discussed earlier. A blood choke (like most Gi chokes) means putting pressure on the carotid arteries on the sides of the neck. Rendering the brain devout of oxygen results in fairly quick unconsciousness. Lack of oxygenated blood to the brain shuts it off in order to protect it.  No harm is done to the opponent if the choke is not held for too long.

A very common occurrence is trying to finish a Rear Naked Choke through a combination of the two mechanisms. Now, while a Rear Naked Choke variation can be finished as an air choke, it is primarily a blood choke. In that sense, trying to fit two choking mechanisms into one means you can’t really build the required structure for each of them. This is a reason why BJJ chokes often fail. The solution is very easy. Identify the type of choke you’re looking to apply and adjust accordingly. As long as you have a deep grip and use your wrist, you’re going to get a tap or a nap.

This is one of the best pieces of advice I got very early on in my BJJ journey. Actually, keeping things tight applies to Jiu-Jitsu as a whole. There are very rare instances in which making space is a good thing. In terms of chokes, this is even more important. No matter what kind of a choke, the rule remains the same.

If there is any space between the opponent’s neck and the structure that applies pressure, they’ll be able to defend it. his doesn’t ensure that they’ll get out of it as you’ll probably finish 8 out of 10 chokes like this. However, once you come up against a seasoned opponent. you’re going to lose the choke 8 out of 10 times. Whenever the blood is still able to reach the brain, there’s hope for the opponent. This is where you need to develop that feel about the correct depth and wrist position. Always remember to adjust in order to remove as much space as possible to make your BJJ chokes tighter.

How many times have people told you that you were inch-close to finishing a choke that you gave up on? Giving up on a choke that would’ve worked is even a worse feeling than an opponent getting out on their own. It is a very frustrating situation that grapplers go through at some point in their BJJ journey.

This very common problem ha a very simple solution! There’s a principle in BJJ that is called “slow choking”. This means holding on to a choke that you have wrapped tightly and correctly for a certain amount of time. Usually, the rule of thumb is going for a 10-second count before either adjusting or transitioning to another attack.

This approach makes sure that you’re applying pressure long enough for the choke to take effect. What you need to understand is that BJJ chokes are unlike arm or leg locks.  Joint locks generally work in a binary fashion. They either work, or they don’t. Chokes, on the other hand, tend to be more of a gray zone.  A strong clean choke can force any opponent to tap out immediately.  But not all chokes are created equal. Sometimes your grips can be just slightly off, for example.  However, even chokes that are not completely perfect can still work.  It just takes time.

The basic concept is that holding on to a choke is not only going to apply pressure to the neck but also slowly restrict the opponent’s ability to breathe. As taking in air becomes tougher, people tend to give up or go to sleep. Al lit takes patience.

BJJ Chokes Dissected – Everything About Choke
Loop Choke Essentials
Different ways in which you can finish a Jiu-Jitsu Choke
Blood vs air Jiu-Jitsu chokes: Which are better?