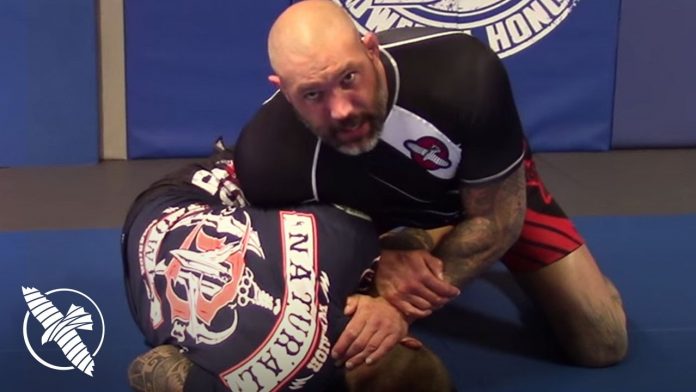 It is time to reveal my secret weapon. For several years now, ever since I saw coach Neil Melanson teach it in one of his instructionals, the Mizzou choke has been one of my main weapons. It is simply awesome. It is tailor-made for BJJ even though it is originally a wrestling submission. In fact, it is a dirty wrestling move that’s actually illegal. I’ll go more into that in a minute. For the purposes of JIu-Jitsu, this choke works like a charm, without any strength requirements. In fact, this one works against bigger grapplers even better than against those of your own size. It does for me, on a regular basis.

If the fact that this is not a regular submission that people expect doesn’t sell you on the Mizzou choke, then the fact that Neil Melanson swears by it should be more than enough. And, if you have no idea who exactly Neil is, you can check out his Catch Wrestling for BJJ instructional right here. The Mizzou choke makes an appearance in volume one, near the end. Now, despite Neil showing a setup directly from top half guard, as you’ll see later on, the options this wrestling submission offers are actually endless in terms of Brazilian JIu-Jitsu. And yes, it does work with the Gi as well.

Contents hide
A Sneaky, Mostly Illegal Wrestling Submission
Setting Up the Mizzou Choke
How To Use It In BJJ?
Final Thoughts

What exactly is the Mizzou choke, to begin with? In essence, it is an arm triangle, only done with one arm on your part. On top of that, there’s a twisting motion that doubles as a spinal twist. The twist actually accentuates the choke itself.  Basically, for the Mizzou choke, you want to have an opponent on their side, with one arm going across their neck. Imagine you’re setting up a D’arce choke from side control and you’ll get the picture. From there, you should think more towards a guillotine rather than a D’arce in terms of grips. The goal is to actually grab the triceps of the arm that’s across, rather than a chin strap like for a regular guillotine.

This is the hard part when it comes to executing this choke. The easy part is actually choking someone out. All you need is to place your chest on the elbow of the trapped arm. IN certain situations, given people’s build, you’ll get a choke even there. However, for the real Mizzou, you want to grab the near side leg with your free arm. The final piece of the puzzle is pushing that leg all the way to the other sid,e like for an end-of-class stretch. It is an instant choke that puts people to sleep before they can react.

In fact, this is how this wrestling submission came about. In wrestling, it into illegal if the referee can’t see it. So, people started setting up the grips from a front headlock in wrestling, the trick is as the wrestler on the bottom does everything they can to prevent a pin (their shoulder blades on the ground), the choke actually makes it easy to put them to sleep and pin them. Then, wrestlers react like they did not know the opponent went to sleep.

Setting Up the Mizzou Choke

Dirty for wrestling but tailor-made for Brazilian Jiu-Jitsu. After all, innovative ways of putting people to sleep is what we do anyway, right? That said, this wrestling submission works like a charm however you go about setting it up. The “original” setup I saw, thanks to Neil Melanson was from the top half guard, after going for a guillotine. OF course, if a guillotine doesn’t work rolling out to switch o D’arce and Anaconda chokes and neckties is the next logical step. Well, that’s the perfect moment for setting up the Mizzou choke as well. Whenever you find yourself in an inverted north-south position, looking for guillotines or Anacondas, the Mizzou is right there for the taking.

Since it works from a guillotine grip you can see the applications. Any front headlock attack, from guillotines to Anaconda is absolutely perfect to eventually lead into the Mizzou. I find it a really easy way of finishing someone that’s defending a D’arce or an Anaconda quite well. The advantage is that most people do not really find the Mizzou grip threatening until it is too late. When it comes on, though, it is unstoppable.

Of course, all other variations of getting the grip will also work. I like to set it up from the butterfly guard off of guillotine attacks. Another favorite of mine is when people try to escape mount or side control and give me the arm that eventual leads straight there. In essence, anytime you can smash and arm with your chest and wrap the head, you can think about the Mizzou.

How To Use It In BJJ?

We pretty much-covered uses, but still, nothing is that simple in Jiu-Jitsu. While you can use the Mizzou to put people to sleep, and fast, you can also use it to actually set other things up. Once you become known for it, you’ll need to actually use it in different ways. One of my favorite things is to pass hard guards and transition into the mount with immense pressure. This usually happens when I can’t get a hold of the leg to apply the twisting motion.

Another great use is to get the Anaconda choke. The one key reason why Anacondas often fail is the range of motion of the arm you need for the choke. The Mizzou choke is a great way to trap and secure the arm and switch back to an actual deep Anaconda from there that’s extremely hard to defend. The best part about it is that you can loop this unexpected wrestling submission and the Anaconda as much as you want until you get a tap.

A word of caution with the Mizzou choke. This move is intended to put people to sleep in order to obtain a pin without any resistance. In that sense, it comes on extra quick, and people go to sleep instantly. So, be mindful of your partner and careful of what you’re doing, particularly when you’re rolling. In competition go, all out, as the referee is there to keep an eye n the opponent. In rolling, however, this choke can be dangerous as I do not know of another choke that comes on so fast and is hard to tap to at the same time. Apart from that, happy hunting!