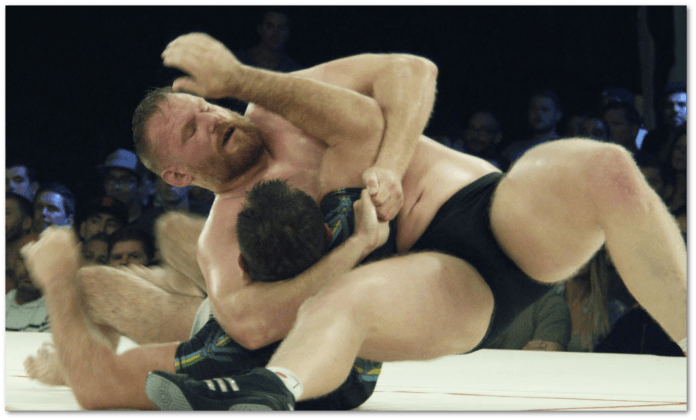 What is the best submission move in all of grappling martial arts? The answer to this question is tricky, despite being glaringly obvious. the best submission is the one that works. Or, more specifically, it is the one that works for you. For some people, it might be a Kimura. Others are really fond of hitting triangle chokes from all kinds of positions. Of course, we can’t skip over all the high-tech leg lockers that dominate the mats these days. Perhaps, you’re more of an old-school guy/girl and like to go for some “antiquated” Judo chokes or armlocks. You could also be a neck cranking, spine twisting 10th Planet Jiu-Jitsu die hard. Or, you could be a pressure grappler who enjoys going for a catch wrestling submission or two.

Before Brazilian Jiu-Jitsu, all grappling martial arts we’re significant low on submissions. Throwing an opponent down and proceeding to control them for a period of time, or points is still the norm for most grappling martial arts. Although Sambo in particular, and Judo to a lesser extent have submissions, the main focus lies elsewhere. In came BJJ, changing the submission grappling game forever. However, there’s one art that’s a predecessor of BJJ and was the ultimate submission grappling discipline before the Gracies. It is the brutal grappling martial art of Catch wrestling. Catch-as-a-catch-can wrestling is a variation of wrestling that’s unusually rich with innovative and painful submission holds. Even today, going for a catch wrestling submission can catch your opponent’s by surprise, regardless of their rank or experience. We’ve seen it happen more than once!

The rise of submission grappling, as we know it today, is largely a result of the development of catch wrestling. The crazy martial art of catch wrestling is a western based style, that goes as far back as the 1870s. Just to make things clear, wrestling existed long before that. However, submission wrestling was very rare and not developed at all.

Catch wrestling began as a pastime for sailors and dock workers in Britain. It provided both entertainment and a betting opportunity for people involved. Since it spread fast, the sailor took it aboard as they traveled. After all, they did have the time. Unsurprisingly, catch wrestling game to the states along with the British, way back when. This is where catch wrestling, actually got the form that is closest to that of today.

In the USA, most catch wrestlers worked in circuses or fairs. They had an open challenge for anyone to come and wrestle them for a prize. Since they never knew their prospective opponent’s they had to be ready for everyone. In order to ensure victory, they developed a system of chokes, neck cranks and joint locks that were certain ways of beating all kinds of opponents. The idea was that any catch wrestling submission goes you can get goes, the faster the better. Hence the name catch-as-a-catch-can.

Use catch wrestling to become much better at BJJ! All you need is to pick up the Neil Melanson DVD Collection and watch your opponents tap more times than ever before! He offers brutal finishing options from both top and bottom, with the collection boasting 5 DVD sets and counting!

Nowadays, Brazilian Jiu-Jitsu tends to focus on control based submissions more than pain based ones. Since the sport is a very different one to catch wrestling, such an approach is more than fitting. However, there are certain gaps in BJJ, especially in the submissions department.

The odd catch wrestling submission or two can really boost your game and help you become much more well rounded as a grappler. Not all catch submissions are going to fit all grapples, that’s understandable. Some are a better fit for certain types of fighters than others. However, there are a few that are so simple and so reliable that they can work for everyone. Once such a move is the chest choke from scarf hold. It is the move Josh Barnett used to submit Dean Lister when they fought in Metamoris a few years back.

In all honesty, the scarf hold is not a position known for submission options in BJJ. In both Judo and Catch wrestling, the situation is the opposite. Granted, there are much more options for the bottom person to do in BJJ, but submissions are still scarce. The chest chokes allow you to better control the position, prevent all counters and finish with ease. Plus, it makes your opponent cringe with discomfort and pain.

From the scarf hold position, AKA Kesa Gatame, getting the chest choke requires less set up than any other submission option. It is actually surprisingly control based for a catch wrestling submission.

To begin with, you need head control from the scarf hold. That means you being in side control with your hips facing the opponent’s head. From there you extend the bottom leg forward. The arm that goes around the opponent head is going to grab the thigh of that bottom leg, securing them in place. This is going to lift their head and near side shoulder up, breaking their posture and restricting movement. Proceed to bring the opponent’s near side arm over to the side, similar to an arm triangle position.

In order to get the chest choke, use an S- grip to pull the arm you have around their head towards your chest as much as possible. This is an essential step in setting this submission up. Weight distribution is key for keeping the position, so remember to stay on your toes constantly, butt off the mats. The finish comes by leaning back while pulling on the head. The goal is to crunch up your opponent by forcing their head towards their chest.

The reason this move works as a choke is that it disrupts breathing. Unlike any BJJ choke though it doesn’t achieve this directly. Instead, It places enormous pressure on the diaphragm, preventing your opponent from successfully breathing in after the breath out. Cold and brutal, right?