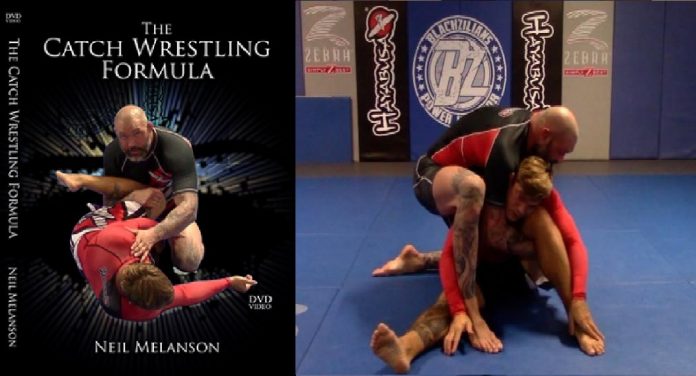 BJJ, as a grappling martial art has always been open to cross-training in other arts from that category. The constant evolution of art is mainly due to this openness. Historically, Brazilian Jiu-Jitsu is a mixed grappling art, to begin with. It was founded on the principles of Judo, which has roots in Japanese Jiu-Jitsu and later embroidered with skills from Wrestling and Sambo. Even to this day, BJJ still accepts any grappling concepts that work into its huge toolbox. One of the major contributors to Brazilian Jiu-Jitsu has always been catch wrestling. In terms of bringing the two arts together, there’s probably nobody better than Neil Melanson. If there’s one catch wrestling digital resource you should own, it is the Neil Melanson DVD called “The Catch Wrestling Formula”.

Mr. Melanson is a real grappling expert that often puts out amazingly detailed content via YouTube. I, personally, am a huge fan of catch wrestling for BJJ. You can imagine my joy when I heard of a Neil Melanson DVD that focuses exactly on this subject! Suffice to say I never even read the content before ordering. The result – I became unstoppable from the top, more precisely top half guard, thanks to this Neil Melanson DVD. Here’s what I think about it:

The ‘Brutal Art” tag is mostly due to the pain and discomfort that catch wrestling looks to create in every position possible. Much to that extent, catch really favors leg locks, which we all know have been proven to be highly effective at the highest level in BJJ. Now imagine going for heel hooks of a crushingly painful cradle. Pick up the Neil Melanson DVD “Catch Wrestling Formula” and you won’t have to imagine it any longer.

Who Is Neil Melanson?

Neil Melanson is an accomplished grappling coach with boatloads of experience. He spent a long time as the head grappling coach at Xtreme Couture and Alliance MMA. He specializes in catch wrestling, but also favors Judo, having worked with Gene LeBell.  Some of the other notable coaches he’s worked with to develop his game are Gokor Chivichyan and Karo Parysian. No wonder Melanson likes leg locks so much. Triangles and a tight close guard game are also his forte.

Neil Melanson has produced some high level grapples himself, the likes of Randy Couture, Gray Maynard, Chael Sonnen, and many others. He has a very effective and submission oriented style that he demonstrates in high detail in his DVD release.

As far as catch wrestling goes, I’ve always looked at it from one perspective in relation to my BJJ game. Top pressure. Despite the fact that it is a well-rounded art both standing and on the ground, this was one area I personally was looking to improve. What I found was that catch wrestlers not only know how to distribute weight to perfection, but they also know how to make someone really uncomfortable while doing it. Moreover, they even know how to induce pain from pinning positions. This discomfort is key in both controlling an opponent and causing an opening for a submission.

Since acquiring the Neil Melanson DVD “The Catch Wrestling Formula” I ended my quest. Everything a grappler needs to know about pressure and passing into submissions is there. The DVD is mostly focused on submitting from and/or passing the half guard. Neil is very methodical in his explanation and devotes a lot of time to every move. This instructional is unlike most of the “classic” BJJ instructionals. Melanson spends between 20-30 minutes on every move, talking about every single detail.

The content is spread across four DVDs, each working on a very specific subject. Each DVD is an hour long and filled with techniques that connect to each other. Melanson’s instructions create a system that covers every “what if”  that might arise from a specific position or submission.

The first DVD starts in the top half guard position. Neil focuses on dealing with the inevitable underhook from the bottom player. The underhook bottom half guard game is the most common one in BJJ, even at the highest level. Suffice to say, you’ll never suffer from it any longer after watching this Neil Melanon DVD.

The first option Neil demonstrates is how to pass while utilizing the opponent’s underhook. From the pass, he continues to offer great attacking options. His details on head control prior to setting up the Darce choke are impeccable. Neil also makes a very clear distinction between a Whizzer and an overhook, which I didn’t know before. He offers attacking options from both, as well as options to connect them. On a final note, the Mizzou choke is so effective and easy to get that it quickly became one of my favorites.

The Cow-catcher is a very interesting position that was always kind of a puzzle for me. After watching Melanson’s DVD it all became clear. For the uninitiated, the cow catcher is a variation on the front headlock which leads straight into multiple chokes.

Melanson offers not only the D’arce and Guillotine but also a variety of neckties as well as transitions to the rear-naked choke. All of the moves are explained in great detail and work as a tight system. Oh, and his “Half Helch” segment is a thing of pure grappling beauty. It is going to revolutionize your top half guard game, no matter how good you think you are now.

As far as I’m concerned, this is the masterpiece of this Neil Melanson DVD. The third volume is all about a position that is a wrestling staple – the cradle. Since I’ve never done wrestling I had no prior knowledge of it. What I got from Melanson is not only the essential details on holding and getting to the cradle position but the catch wrestling aspect as well. namely, he uses the position to get to a number of submissions that are as tight as it gets.

The DVD outlines how to transition from one cradle position to another while constantly keeping the pressure on the opponent. Watch out for every little detail here, since they’re all crucial in maintaining control during transitions. The transition to the back is my favorite because it not only gets you a great position but sets you up for a choke immediately.

In all honesty, the cradle series spills into the fourth DVD, at least in the beginning. Remember how I wrote that Melanson really likes going for leg locks? Well, he shows us how in this volume and it is groundbreaking. He uses catch wrestling positions like the cradle to enter into tight heel hooks and kneebars. For those who are proficient in the leg lock game, he offers very original ways in which to get into dominant positions.

The final part of the fourth DVD is dedicated to a bit of a bottom game and a guard that is Melanson’s specialty. The shoulder guard system he offers is a closed guard variation that gives a whole new dimension to the guard. it is a great ending to offer variety and demonstrate just how knowledgeable coach Melanson really is.