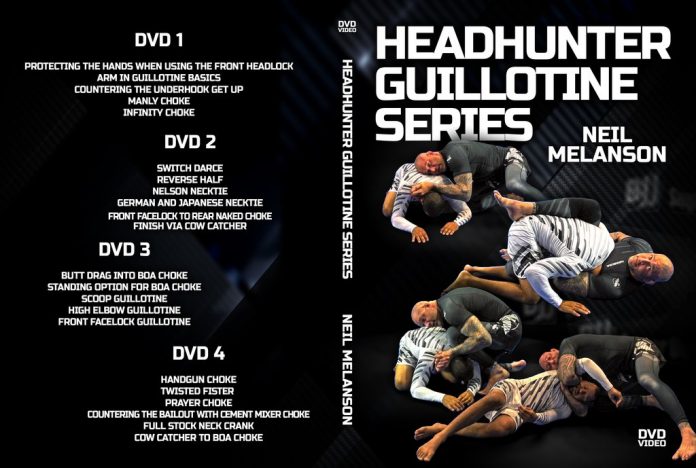 Neil Melanson DVD, Head Hunter Guillotine series finally hit the daylight. It is all about front headlock attacks and vicious catch wrestling-style chokes that’ll tap any opponent in any grappling martial art and BJJ is not an exception.

Back when I was a newly promoted BJJ blue belt I came to a realization. I had a lot of trouble with a more experienced blue belt who kept sweeping me from bottom half guard. He had and still has a very slick underhook game from the half guard. What I discovered, purely by chance, was that his underhook could be my gain instead of my downfall. The D’arce choke came about quite naturally and I haven’t looked back since. It not just solved my half guard conundrum, but it opened my eyes to the power of the front headlock position in Jiu-Jitsu. Once hooked on the front headlock I scoured the internet for every instructional that could further my progress. Lately, I came across a certain Neil Melanson DVD on the subject and I struck gold. The Headhunter Guillotine Series is the ultimate front headlock learning tool for grapplers.

Don’t be fooled by the name of this Neil Melanson DVD. It’s not all about guillotines. D’arce chokes, guillotines, neckties anacondas, powerful control, and a smooth transition are all there. Neil has a very rich grappling and particularly catch wrestling pedigree, which makes him the top person to demonstrate such moves. Up to this point, I always believed that Mark Schultz was the go-to man for front headlocks in grappling martial arts. Well, I guess that mantle now goes to Neil Melanson. Get the DVD and decide for yourself.

The Front Headlock In Grappling

The front headlock position is one of the fundamental positions of wrestling. It is a very versatile position that’s easy to acquire from both standing and ground fighting positions. The point of the position in wrestling is to take a person to the ground when standing. The front-headlock opens up an amazing array of takedowns while keeping you fairly safe. When on the ground, the front headlock offers wrestlers a great way to transition to pinning positions.

In catch wrestling, submission grappling and BJJ, the front headlock opens up plenty more opportunities compared to wrestling. The presence of submissions changes the game significantly. The front-headlock offers a number of different chokes that take very little effort to obtain. The great thing is that since all these chokes can be done from the front headlock, they connect with each other perfectly. So, the front headlock is a very versatile attacking system for Jiu-Jitsu practitioners.

In a front headlock, you find yourself in front of your opponent, whether standing or on the ground. The basic concept of the position is to get your chest over the head of the opponent. Your arms need to control the neck, either directly or with one arm going around one of the opponent’s arms. From there it is all about angles and subtle details to remain in control and open up attacks. It is a very uncomfortable position to be in which is one of the basic topics in this Neil Melanson DVD. After all, he is a catch wrestler.

Neil Melanson is a renowned grappler and MMA coach who has a very original approach to grappling. When we take into account that his original coaches were Gene LeBell and Gokor Chivichyan this is easily understandable. His grappling background is in catch wrestling, Judo, and Sambo, which resulted in his unique style of grappling. He is very aggressive and unorthodox and favors the concept of taking your soul through discomfort before finishing a submission.  It wouldn’t be a true Neil Melanson DVD without his “sadistic” approach to strangling people from the front headlock.

In terms of content quality, you can’t really ask for more. Neil has a very distinct style of teaching as well as grappling. He doesn’t show a dozen moves per chapter, as is the case with plenty of other BJJ instructionals out there. Instead, he focuses on just a handful of moves but goes deep. In fact, I think that he is the only one who doesn’t spare details when demonstrating techniques. On the subject of structure, Neil has a systematic approach that thoroughly connects everything he shows in cohesive sequences.

DVD 1 – Arm In Guillotine And Control

It all begins in a typical Neil Melanson DVD style – slow and methodical with control in the forefront. Remember my underhook issues? Well, Melanson addresses precisely those to begin with. He also offers invaluable advice on how to protect your hands in the front headlock, preventing the opponent from getting out.

Neil’s unmistakable aggressiveness is present even when demonstrating control, but it goes off when he starts with the submissions. His concept of the arm in guillotine is by far the clearest oneа I’ve heard in all my years in grappling. Watch out for the elbow position tip- it’s going to completely change your guillotines! OF course, it wouldn’t be Neil Melanson if there’ weren’t a terrific variation on how to strangle people to finish the DVD.

I have to admit – when I got the DVD this was the first volume I saw. I know, is should’ve kept the order but I had to check out the D’arce details. Well, it turned out to be the right move. I’ve been known as a D’arce guy for a while now, but this DVD has made people tap before I even try to choke them.

The reverse half approach that Melanson demonstrates is pure genius and I loved the fact that he didn’t stop at the D’arce. Since neckties of all varieties are right there, Neil has come up with a very good submission system. The Japanese necktie is a natural continuation of the D’arce but the German necktie is an added option off of both. It is such a powerful position that you’ll get the tap in an instant. On the subject of the Nelson necktie, I’m just going to say it’s unlike any other front headlock choke you’ll ever learn.

As the name of the DVD suggests, Neil loves guillotines. That love of his comes apparent in the third volume of the series. In all honesty, he keeps things interesting by starting off with the Boa choke, an improved variation of the anaconda.

The guillotine variations he demonstrates are three in total and that’s two too many. They’re astonishingly effective both on their own and as a system. The scoop guillotine is the simplest of the bunch but it is brutal when done right. The front face lock guillotine is a true catch wrestling submission that will have your opponents screaming in pain.

The final part of the Neil Melanson DVD series on front headlock chokes is a real cherry on the top of the cake. This is where Neil goes off to demonstrate his trademark chokes which most of us never heard of before. Two things really stand out when you see the principles of strangling people he employs. First, he likes to keep things simple. All of his chokes use the positioning you have to get a tap as easily as possible.

Secondly, they’re more brutal than they are simple. It takes almost no strength to get taps with the handgun choke. The cement mixer is a really useful move whenever an opponent attempts to get out of your front headlock. And, if you’ve never tried a cow catcher before, you’ll be able to learn everything you need with this DVD.