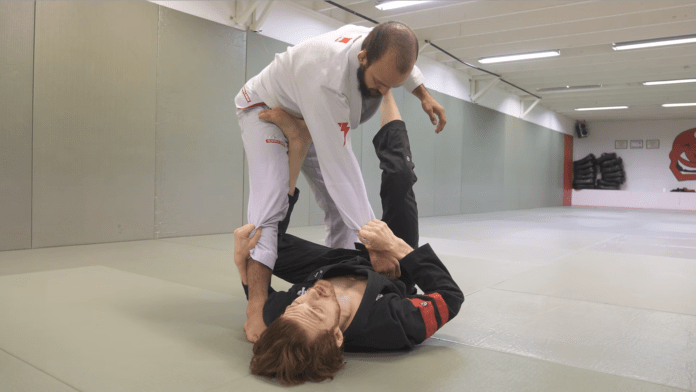 It is futile to try and look for the best guard in BJJ. There are so many, and lots of them have awesome merits, so it really would not be real if we crowned one guard “the king” of all others. However, there is a case to be made about guards that will work for a huge part of the people that give them a try, as opposed to some guards that are not really a great fit for everyone. The cross guard BJJ position is like an update on the highly effective and reliable tripod guard. It does, however, offer a lot more, and it does ticket the imagination of where it could lead someone who is an avid Jiu Jitsu competitor.

The cross guard is something that will work for everyone and is easy to pull off in both Gi and No-Gi. I haven’t tested it in No-Gi yet, but it shouldn’t be that different than the tripod guard, for the most part. With the Gi, it makes a lot of sense, ad really works like a charm against everyone, mostly due to one very important fact – it does not appear like a big threat to the top person. IN other words, it is exactly the deceptive guard you’d like to have in your arsenal in order to be maximally effective with minimum effort. Below is a basic cross guard BJJ guide for you that explains everything about the position.

Contents hide
What is the Cross Guard?
How Do You Get There?
Cross Guard BJJ Attacks
Conclusion

What is the Cross Guard?

The cross guard BJJ position is an open guard variation that is very easy to set up. As I mentioned, it reminds of the tripod guard, with a couple of very obvious distinctions. In terms of positioning, you want your hips to be at about a 90-degree angle in relation to the opponent’s hips. This is different from most open guards which have your hips squared to some extent.

For the cross guard, the hips are at about a 90-degree angle and slightly underneath the opponent. The arm that is closest to the leg goes under and around, ending up with a pocket grip on the pants. This is one huge difference in comparison to the tripod guard, where the grip is directly on the heel. The other arm goes on the sleeve of the same side arm as is the control of the leg, which means it is a cross-grip.

The leg nearest to the opponent is propped on their near-side hip at belt level. The outside part of the foot is the only area making contact initially. hat leaves on leg free, and it goes right into the biceps of the far arm, spider guard-style. This is the second obvious difference compared to the hook placement in the tripod guard.

The cross guard BJJ position, as simple as it seems, actually provides you with as much inside control as you could hope for from a bottom position. 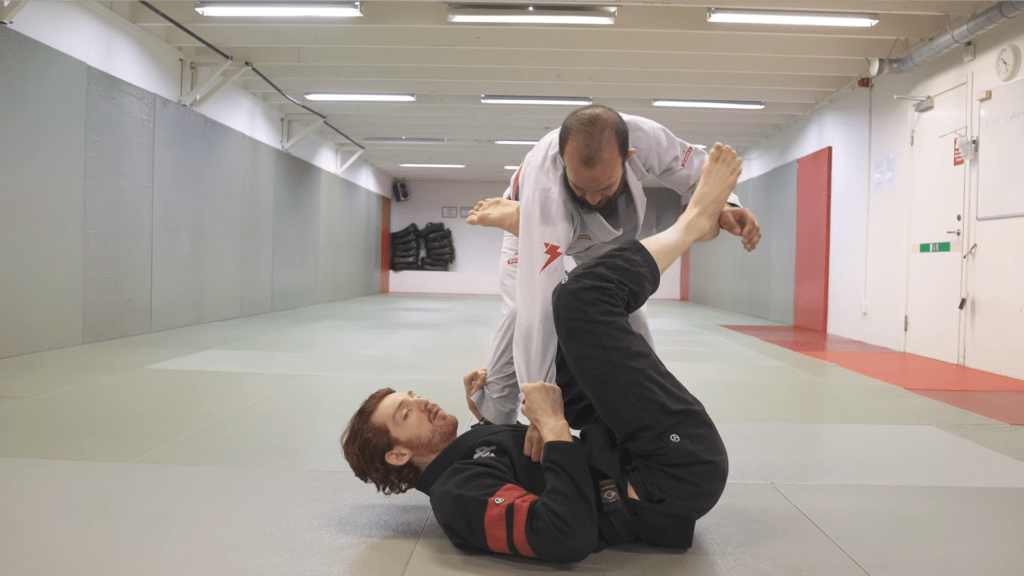 How Do You Get There?

Apart from winging it and getting to the position on your own term, there are several well-established ways into the cross guard. The one thing that allows for each and every entry, though is the gap between the knee and elbow on the side foreleg and arm you’re going to control. As long as this is available for you to thread the foot in, any entry will do.

The closed guard is a direct and easy route to use. As opponents stand up, you go for the leg, at the same time getting the right angle and the foot on the hip. It is all details from there. Another really easy way in is obviously the tripod guard – all longas you change one grip and one foto placement, you’re there without moving too much (if at all).

The De la Riva and lasso guards are also great options. The leg hook is really important, so as soon as you get that one, you are basically in the cross guard BJJ position directly, given that ht grips are already there from the previous guards.

A very cool option is the X-guard, which is basically both away in, and an option to go to from the cross guard. All you need to do from the X-guard is switch the hip you’re controlling with the near leg and the position of the far leg.

Finally, just about every guard retention motion will open up options for you to get the leg on the hip in place, or the all-important hook with the arm and start playing the guard right when the top person thinks they have passed.

The Cross guard BJJ position immediately screams Omoplata attacks from the first moment you set it up or even see it. Th setup though is not direct, but rather has a snaky step that ensures you get it, or a follow-up. Namely, from the basic cross guard setup, you should use the heel of your near-leag to push in the armpit of the opponent. This will set the Omoplata up perfectly, without any space left for the opponent to sneak an escape in. All that is left is trying to pivot, which will lead directly into a triangle, or try to posture up, which opens up a different series of attacks.

When opponents decide to posture up, they will expose their leg for Ashi Garmi entires, or simple back take maneuvers. For the Ashi Garami, all you need is to get your hips as close as you can to theirs and choose whether you’re going to go to a kneebar or deep into the Honey hole. Fro a back take, hips go up like for leg locks, by you’ll reach for the belt with your top arm, and glide behind them for a smooth and attractive back take.

Ther is also a very cool Armbar/Omoplata combination on the far arm, when opponents decide to grab your free leg after they go to their knees trying to stop an Omoplata attack,. this exposes their far arm for an armbar, which opens up an Omoplata attack on the other side as they try to maneuver out of the first one.

the best thing about the cross guard BJJ position is that it works against all three levels of top positioning: standing, half kneeling, and kneeling.

The cross guard is an interesting position to play around with. we’ve all used variations of it before, but now, there’s a mini cross guard BJJ system in place that does offer clear answers to most of the questions the guard raises. I for one, plan on having lots of fun with it in the future Any of your experiences are more than welcome a well!