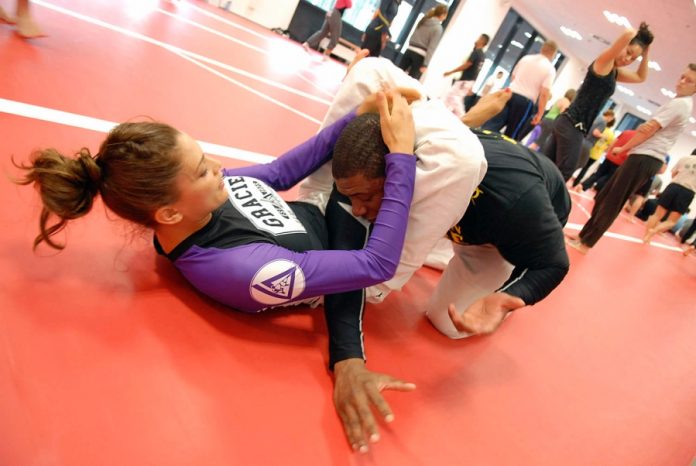 Ah, the triangle. One of the core submissions of Brazilian Jiu-Jitsu and a true mark of the art. the triangle choke is a powerful, fairly simple and extremely effective submission. It is a blood choke, cutting off the brain’ supply of blood and can render someone unconscious in seconds. It is such a huge part of the sport of Jiu-Jitsu that many schools have it as their logo. think about it, how many schools around the globe have a triangle shaped academy logo? There’s a reason the triangle features so much in grappling – it works. And it doesn’t just work from the guard, traditional style. There are plenty of triangle chokes to go round, some more difficult than the others. What’s certain, is that it works.

Since the earliest days of Brazilian Jiu-Jitsu, the triangle has been one of the most potent weapons to submit an opponent. As Jiu-Jitsu grew, so did the use of triangle chokes. Across all competition formats, whether it is Gi BJJ, No-Gi grappling or MMA, triangles work like a charm once you slap them on. Furthermore, they work equally as effective at white, as they do at the black belt level, which is not often the case in BJJ. The triangle choke is one of the highest percentage, most reliable techniques you can do.

For quite some time, people with a stockier build had trouble synching up the triangle. It is not that the move doesn’t work, but getting there proved to be a real nuisance for some grapplers. Thankfully, Jiu-Jitsu’s constant evolution provided the answer to this problem. Nowadays, there are several triangles chokes to choose from. Work from all positions in grappling and can finish even the most experienced of opponents.

The basic principle behind triangle chokes is simply. They are all blood chokes that involve placing pressure on both sides of the neck. The result is constriction of the carotid arteries and subsequent loss of consciousness due to lack of oxygen in the brain. In order to exert the pressure on the arteries, Jiu-Jitsu relies on a triangle-like structure to make sure there’s no way out. The shape of the triangle ensures that there’s no pulling away from the pressure on the neck.

For your basic triangle, you need to be on your back, preferably in closed guard. The goal is to push one of the opponent’s arms behind them, while you wrap your legs around their neck. You want to keep on of their arms trapped inside though. Although your legs can make up the triangle shape on their own, there; some unneeded space left. Trapping the opponent’s arm in that space takes any space away, providing tight pressure on the neck.

Actually, it is the opponent’s own shoulder that makes this choke work. On the other side, it is the thigh of your leg. The shin of that same leg goes across the back of the opponent’s neck. Finally, your other leg locks both your leg and the trapped arm in place. This is the basic structure of a triangle choke.

In order for it to work, though, you need a way to apply pressure. Form the aforementioned position of guard, once you have the triangle you need to make sure you prevent your opponent from posturing up. To do that, simply use both of your hands to pull their head towards you. In order to choke from the basic triangle remember to focus on squeezing your knees close instead of looking to put downward pressure.

Variations Of The Triangle Choke 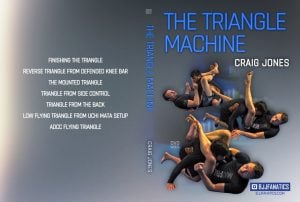 To truly become a nasty triangle machine, you need to learn from one of the best in the game. Before he became known for leg locks, Craig Jones was a crafty triangle choke submission artist. Now, all his secrets are there for the taking, courtesy of his “Triangle Machine” DVD set. Learn the deepest secrets of the triangle choke directly from Jones himself!

Luckily, there is a great triangle chokes to help you improve your finishing rate. While most people have modifications of variations of their own, their area few that work just as well, if not better than the basic. Thos are the reverse triangle, the inverted triangle, the rear triangle, and the no-arm triangle chokes.

The inverted triangle choke is one popularized by the prolific Estima brothers. Braulio and Victor Estima have the reputation of destroying top-level opponents with this variation. As far as triangle chokes go, the mechanics of the inverted one are fairly simple to grasp. You just place everything in reverse. Well, kind of.

Let’s start from the bottom of side control. First, you need to make sure you throw your far side leg over the opponent’s head. In case you’re wondering which leg this is, it’s the only one that can get there with ease. Once you have it there, you just use your opposite side leg to lock everything up. The positioning is simple. The finishing details are what makes it count.

In order to exert choking pressure on your opponent, you have to scoot your butt towards the opponent’s hips, tilting them forward. this will get them that much deeper into the choke and give you more space to tighten and adjust. For a finish, pull their trapped arm’s triceps towards yourself.

The reverse triangle is as close to the basic triangle choke as possible. For this variation, you need to be in the top turtle position. When an opponent is stubbornly defending back attacks, you can think about switching things up. What you should look for is to thread the nearside leg under the opponent’s head and all the way around. The aim is to secure your ankle on the top with your opposite side arm.

The trick here is knowing which parts of the triangle structure are the choking parts. The leg you have under the opponent is going to create choking pressure with the shin and the thigh of the same leg. The locking leg doubles as a lock and as the wedge to keep the head in place. As far as modified triangle chokes go, this one is really tight and doesn’t require any particular limb length. Give it a try!

Out of all triangle chokes I know, this one is by far my favorite. it is a very cool way of dealing with an ultra-defensive opponent’s when you have back control. Sometimes you just can’t finish a choke, or you’re up against a top-class hand fighting expert. This is when you’re going to hit a rear triangle.

From a basic seatbelt configuration, you’ll want to be on the choking side. From there, extend both arms so that you have enough space to angle out, towards the “under” side. Just like when you’re attacking an armbar from the back. instead of an armbar or Kimura, though, you’re going to place your bottom leg across the opponent’s neck. Once you have it all the way through, you’ll just lock up with the other leg. It is a brutal triangle that’ll leave you in complete control.

Finally, a triangle that goes a bit against the rules of triangle chokes. It’s a very useful one for situations in which your opponent gets their arm out of a regular triangle. As we discussed earlier, once the arm is out there’s space inside the triangle structure that scuppers the choke.

When you find yourself in a triangle without an arm trapped, there’s an easy little fix. Just keep the structure in place and use on arm to keep the wedge leg in place. Then, thread in your other arm under the opponent’s neck and grab your first arm. then, you can close up the triangle and squeeze. An easy tap that nobody can escape from.