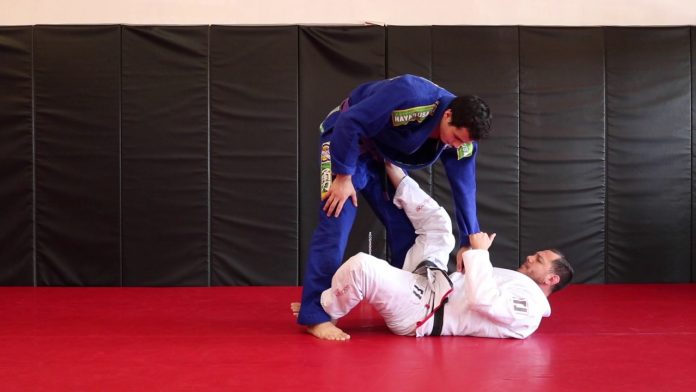 You know those moments in Jiu-Jitsu when things you’ve been doing, or trying to do for a while simply “click”? Well, I’ve had one of those clicks not long ago, and, of course, I have to share my thoughts about it. The concept is simple – why not expand the position we use as guards, to include more checkpoints between guards that are already established? For example, if you’re looking to transition from a butterfly guard to an X guard, you have a fair amount of ground you need to cover, so to speak. What I came across are a couple of sweeps along the way, namely the tripod sweep and sickle sweep, that can actually be used as open guards, or checkpoint guards. After some testing, I’m satisfied with how this concept works.

Sometimes, Jiu-Jitsu is way easier than what we make it be. As Rickson Gracie said, “Jiu-Jitsu is perfect, it is humans who make errors”. In other words, Jiu-Jitsu is simple, and it will only be as complicated as we make it. From time top time, these clicks appear though, that put entire areas of BJJ into perspective. I’ve had quite a few of these clicks in the last decade, but this last one has to be one of my favorites. The tripod sweep and its best friend, the sickle sweep are often regarded only as techniques that work for beginners. Nothing could be further from the truth if we only adjust our approach to them.

The idea of checkpoint guards (for lack of a better term, at least at present) appeared when I was working on the open guard curriculum for classes in my Academy. The idea was, start in the butterfly guard and work towards some of the most common open guard options that work with the highest percentage of success. Of course, that includes the Single leg X and X guard as the final destinations. However, it appeared to me that going from a butterfly or shin-to-shin guard all the way to X guard often times leaves the bottom player exposed. Most of the transitions are based on explosiveness to a certain degree or making your opponent make mistakes. But what happens when those strategies don’t work?

Well, there’s always the Jiu-Jitsu way of doing things. If there are holes in anything you do, patch them up. So I did, the best I could. The idea was, to use every checkpoint on the road between the butterfly guard as the starting point, and the X guard as the endpoint. Of course, the idea was to have a system that will work equally as good in both Gi and No-Gi. A couple of sweeps kept presenting themselves as options along the way. At first, I disregarded them, thinking of them as “beginner” techniques that would “never work” on a skilled and experienced opponent. But then, luckily, I reconsidered.

What if, when we get to these sweeps, which are already there, we try and remain in place as long as possible? The idea was that you can stay in a submission spot like a D’arce choke for long periods, and use it as a position of control rather than just a choke. Why not use the same concept. As it turns out, the tripods weep and the sickle sweep, both readily available and easy to combine are actually the perfect checkpoints when transitioning between open guards. Henceforth, I dubbed them Checkpoint Guards.

Out of the tripod and sickle sweep, it is usually the tripod that people learn first. In most cases, it is taught as a reactionary sweep against an opponent that has managed to open your closed guard by standing up. It works like a charm in that context, no arguments there.

The mechanism of the sweep is very basic and that is why it works. The idea is to hold the leg of your opponent with one hand, just like for a De La Riva Guard. In fact, getting to the De La Riva from the tripod is yet another easy option. But I digress. Your leg that is on the same side of the opponent’s leg you’re controlling goes on the hip. Your other arm should have a grip on the Gi or wrist of the opponent, targeting the opposite side arm. A “cross” grip, in BJJ vocabulary. Finally, your other leg should hook behind the heel of your opponent’s free leg. A simple push an pull with your legs, combined with steady grips, will send everyone crashing to their butt.

The way the tripod sweep is set up, though, often has the leg that hooks behind the knee, until you’re ready to sweep. That is what prompted me to consider the position as a guard, rather than simply a sweep. It is also an important detail into why you can actually pull off using the tripod sweep as a checkpoint guard. More on that later on.

Usually, you go for the sickle sweep when an opponent manages to shake off the tripod sweep hook from their leg. For the sickle sweep, you want to place the opposite leg on the hip, compared to the tripod. This will have you on your side, especially when you keep the grips the same, which is the goal. The leg that was on the hip no takes the place of the hook. But does so with the calf muscle hooking behind the opponent’s calf muscle. This gives you a lot more reach, and sweeping is done with the more powerful scissor motion of the legs.

You can set the sickle sweep up directly as well, simply by starting off with the appropriate leg posted on the hip. It is also the main entry point for the X guards, particularly the single leg X.

Developing Guard(s) Out Of Nothing

The idea of checkpoint guards using the tripod and sickle sweep really took shape when I did some experimenting. As it turns out, the basic sweep positions are a bit hard to hold as guards. However, it can all be solved with just a slight adjustment in your body positioning. As usual, the devil is in the details, and this time the game-changing detail is the angle.

The task is simple – always try to have your body aligned with the opponent’s feet. In the case of the tripod sweep, this means being in a position like when pulling guard – facing your opponent with your side, rather than being parallel to them. This is the detail that will turn the tripod sweep into a powerful position of control you can hold. Moreover, it makes your opponent shift base awkwardly making the sweep much more potent as well. A cool side-effect.

With the sickle sweep, things get a bit trickier. Opponents often try to skip past the leg that is hooking, which can leave you in a vulnerable position. This is where that cross grip you have on the arm becomes really important. Use it to pull the opponent forward, so that you take away both their posture (thanks to the leg on the hip) and their balance (thanks to the hooking leg). You’ll find it really easy to hold and control, even with a No-Gi grip.

Finally, the transitional options are endless. The tripod sweep checkpoint leads to De La Riva, X guard, and Singel leg X with ease. The sickle sweep checkpoint offers single leg X, 50/50, and Ashi Grami entries. The best thing about it is that you can use these checkpoint so both enter, and exit these guard positions.

The idea of checkpoint guards probably exists out there. I just haven’t been lucky enough to find someone to explain it to me. So I had to figure it out on my own. Just in case there’s someone out there that is in the same situation, I hope this breakdown of the concept helps put things into perspective. Moreover, any feedback is more than welcome. Have at it!