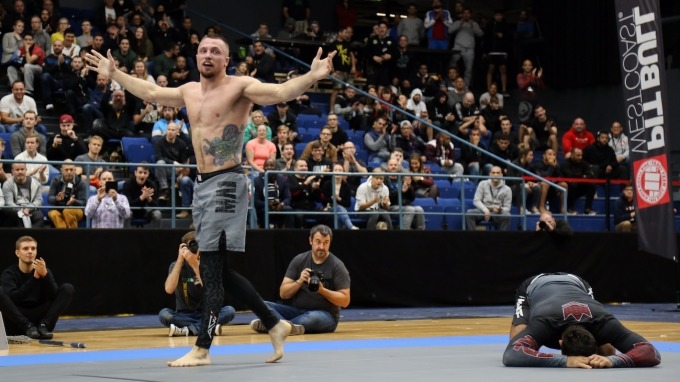 In the world of Brazilian Jiu-Jitsu top level competitors are also very sought after teachers. It is understandable why everyone would like to learn from the best. Now, you have the opportunity to acquire a Craig Jones DVD wherever you are in the world and learn from the very best.

Thanks to modern technology, getting a private class with your BJJ idol now doesn’t require you to be physically present at their academy.  Of course, getting a private class with Marcelo Garcia is always better than watching an instructional. However, if you live in Estonia, you really have no other choice. So, online instructionals and DVD releases are the way to go. And speaking of the hottest prospects of today, there’s one Austrailian that easily tops the charts. Craig Jones has taken the grappling martial arts world by storm, and the best is yet to come.

Craig Jones first came to attention in EBI, performing admirably but falling short of a title. A fearsome leg locker, Craig got on the ADCC 2017 roster and once again showcased his elite-level game. Shortly after he went back to the EBI, this time as a favorite. If you’ve ever seen a Craig Jones match you know that they’re efficient and very entertaining affairs. Well, so are Craig Jones DVD instructionals. Albeit not many in number, they offer plenty in terms of quality. Given that he rose to grappling stardom during the last year, there is still a lot to come from the young Australian both in terms of matches and instructionals.

Craig Jones is a huge name in the No-Gi Jiu-Jitsu scene. That, however, does not mean that he is not a very successful Gi competitor as well. Actually, Craig Jones is a very well rounded grappler that understands the art at a very deep level. He is far more than just a one trick pony, although he does tend to favor leg locks. Heel hooks are his submission of choice, much like the Danaher Death Squad boys. If truth be told, he is the only one to ever get near the success that Danaher’s squad has with lower body submission holds.

Craig’s Jiu-Jitsu journey started in Australia, where he discovered the Gentle Art through his cousin. After becoming a purple belt, Jones switched over to Absolute MMA in Melbourne. A few years later he got his black belt from owner and head coach Lachlan Giles. Ever since the beginning, Craig has been competing a lot and was a fairly known name on the local Australian grappling scene. He is also an accomplished IBJJF competitor, particularly as a brown belt in a No-Gi format.

So why should you go and pick up a Craig Jones DVD over someone else’s? After all, there are a ton of more famous and accomplished grapplers out there. Well, as the grappling world witnessed in both EBI and ADCC. Craig is an extremely efficient submission fighter. He understands the game and knows how to demonstrate and explain it. He does not claim to be an expert in every area of Jiu-Jitsu, which I find refreshing. His instructionals are very specific, but he doesn’t leave anything out of the areas he is explaining. Every aspiring competitor should pick up a Craig Jones DVD. It is as simple as that.

Here are all DVD and Digital Instructionals by Craig Jones:

Battle Tested Down Under Leg Locks

How to Pass Guards by Using Leg Attacks

The Triangle Machine by Craig Jones

As far as Craig Jones DVD instructions go, this is the quintessential release every grappler should own. Now that Craig is famous as a top-level leg locker, his knowledge on the subject is in high demand. Luckily, we didn’t have to wait long for a solid release on his unique approach to leg locks. And yes, although it is very natural, based on the Danaher philosophy, Craig’s leg locking system is really original.

Now, if you’re looking for an instructional on all leg locking positions and submissions, this is not the one. If you know, on the other hand, exactly how efficient heel hooks can be, you’ll appreciate this release extremely. Craig focuses on the mechanics of the heel hook, which in all honesty, is not such a big secret anymore. His system for finishing them is! Craig’s unique entry patterns along with the counters to virtually every escape make up for an effective and logical system! Your opponents are just going to get stuck deeper into heel hook territory as they try to escape. The most dangerous creatures really do come from Australia!

If you’re worried about should you purchase John Danaher DVD on Leg Locks or Craig Jones the answer is simple? If you like pure technique with a great explanation without unnecessary details Craig Jones DVD Down Under Leg Attacks is the way to go. And if you like more talking, a lot of concepts and details you maybe don’t really need then you should go for John Danaher DVD LegLocks System. You may also take into consideration the price of these two great DVDs as John Danaher’s instructional cost much more than Jones’. If you ask me, Craig Jones is the way to go. There’s a lot of techniques, a lot of key details and concepts and it’s all tested and proved by Craig in his competition matches.

Another big aspect of Craig’s game is the Z guard. While this position is extremely effective in all competition formats, Jones has taken it to another level. He was really successful with it long before becoming a leg-locker. Fera not all you worshipers of the dark arts, he still demonstrates a few leg locks in this release.

The Z guard encyclopedia DVD starts with the essentials every grappler should know. Even if you do not like the Z guard, you need to understand it. it is a very easy position to hold an attack and can be a great transitional stop in your game. In case you didn’t know, Craig’s favorite submissions before the heel hook were triangle chokes. And you will be exposed to a lot of triangle setups in this Craig Jones DVD. What you get with this release is triple the worth of your money. All of you grapplers out there that like the regular and reverse De La Riva guard, this is the one for you. Connect the Z guard with the most effective open guards in Jiu-Jitsu for an airtight bottom game.

As if Craig Jones was not enough on his own, he now decided to team up with another huge Australian grappling name. This time, grappling legend Kit Dale joins forces with Jones to dissect the back position.

As the name suggests, this is a true masterclass DVD in the back position. Craig’s original entries are once again apparent, along with his finishing prowess. Kit, on the other hand, offers his conceptual approach to complete the experience. Both are very well versed in attacking from Jiu-Jitsu’s most dangerous position. In contrast to the two purely No-Gi DVDs outlined above, this time you also get options with the Gi. You’ll never miss a back take after getting this DVD, so go and get it while it’s available!