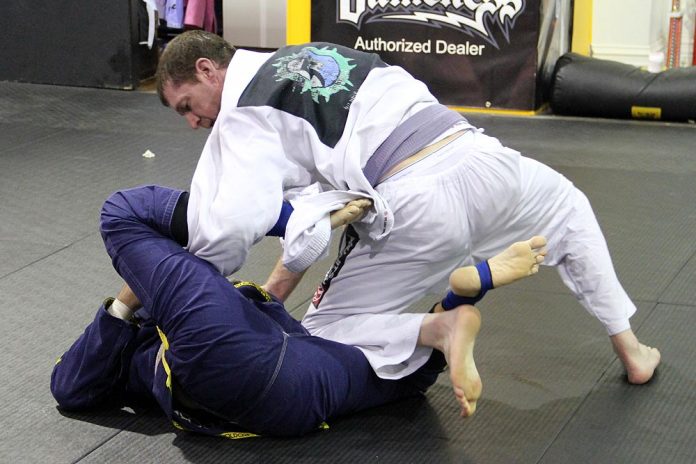 The Brazilian Jiu-Jitsu guard is one of the unique aspects of the Gentle Art. Other grappling martial arts usually consider being on the back as an inferior position. The evolution of Jiu-Jitsu has seen the guard develop into many branches. Today, both the open and closed guards have numerous variations. it is doubtful that any grappler alive has mastery over all of these variations. From the De La Riva Guard to Worm Guard inversions, the open guard is a vast territory that still has more unexplained areas than familiar ones. One of those fairly known territories in the area of sleeve and lapel guards.  While there are many variations of this variation of the open guard (confusing, I know), one has been battle tested over and over again and has come out on top regardless. It is the very effective (and annoying to be in) LEG LASSO GUARD.

Gi based guards keep growing in popularity in modern Jiu-Jitsu. While most innovative concepts, like Keenan’s animal guards, are still infants, the lasso guard is a very well developed position. Despite the fact that it is not a concept for beginners, it is fairly easy to understand. As such, it doesn’t take long to master it sufficiently to be able to frustrate opponents of all levels. Due to its structure, it is one of the most frustrating open guards to pass, often leading opponents to give away sweeps or submissions out of pure desperation. If you haven’t used this open guard before it’s time to add it to your toolbox, the sooner the better.

Attacking Combinations From The Lasso Guard

The main reason why the lasso guard is such a dominant position is that of control. Once you manage to get into the lasso guard it is going to be extremely difficult for an opponent to pass. It is also a great gateway into other open guards and can be used back and forth. Easy guard retention is another very important aspect of this guard.

One of the best options to enter the lasso guard is via the Spider guard. The spider guard consists of double sleeve grips on your opponent. At the same time, both your legs are positioned on their biceps, severely restricting movement. In order to get the leg lasso, you need to get one of your legs off of the biceps control and take it to the outside of your opponent’s arm. From there, the leg goes over the opponent’s biceps from the outside in and continues past the armpit. This gives you one point of control over the arm, via your leg. The other control on the same arm is with the initial grip you have on the sleeve.

When in a correct lasso guard structural position, it is safe to let go of the Spider control on the opposite side. Keeping this control, however, means that you’re in an effective hybrid guard that offers plenty of attacking opportunities.

Attacking from the leg lasso guard is simple, which makes it very effective. All it takes is a slight change of angle and you can sweep an opponent of any size. Preventing the guard pass causes imbalances in itself, and pass attempts only make sweeps easier. The Omoplata is right there, along with all other submission chains that derive from it, like armbars and triangles.

Dealing With The Leg Lasso Guard

In the lasso guard, both your arms are trapped so you won’t be able to make effective grips. Due to the tremendous leverage of the position, you’ll be off balance all the time. Conversely, it is very difficult to maintain your posture.  That is without even mentioning the continuous threat of sweeps, triangle chokes, and Omoplata attacks. All in all, if you have no idea how to behave in the lasso guard you’re going to be very frustrated.

To pass the leg lasso you’ve first got to use technique and positioning to unravel and neutralize the position.  Once control over you is diminished, then you can start using a wide variety of guard passes to effectively pass the legs.

What you’ve got to do in leg lasso guard control is turn one of his frames into a lever and use that against him. The only such opportunity you have is with the leg that’s trapping your arm. There are two main methods to help you achieve the frames-into-levers concept. First, you’ll need immaculate timing. You need to make your move just as your opponent is swinging their leg into position. As they bring it outside, up and over, you have to re-pummel your hand. This effectively brings it to the outside where you can get a dominant hand position and nullify much of the power of the lasso.

The second method is used if you’re already caught in the full-on leg lasso.  In this case, you maintain your base, your posture, and your structure as best as you can. Only then you’ll access a lever (his lower leg) by using your knee right at the tip of his foot. Both methods are very effective as long as you use them in the right context and moment.

Check out the masterpiece DVD Instructional By Samir Chantre. Lasso Guard by Samir Chantre. Samir is the 9 time American National Champion. He was using the leg lasso guard since he started competing and made it a perfect guard. From his lasso guard, you’ll be able to dominate beginners and advanced students with ease. With all the grips, guards and positions it’s really hard to defend it as it’s very specific BJJ game.

In his Instructional you’ll be able to find out everything about the leg lasso guard. He’ll get you through the basic lasso, lapel grip lasso, de la Riva lasso, x-guard lasso, and half guard lasso.

Through Samir’s instructional, you will get a thorough overview of the basic lasso, the spider lasso, the lasso with lapel grip, De La Riva lasso, half guard lasso, and x-guard lasso. In this instructional, you will get all Samir’s knowledge and years of competing. The DVD Leg Lasso has 32 chapters very well explained with so many details and it is definitely the best instructional ever that broke down lasso guard system. Check The Lasso Guard DVD and the list of Techniques

If you’re interested in Buying Samir Chantre’s Lasso guard you can but it HERE as it’s on sale at the moment.