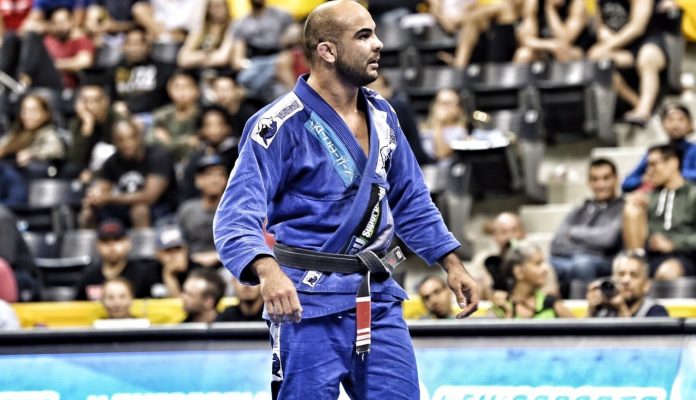 Bernardo Faria is a 5 times world champion at black belt and one of the most accomplished grapplers in the world. His level of technical knowledge is immense and he is one of the best teachers in the sport. Luckily for all of us, he is regularly releasing DVD instructionals on various subjects that are his expertise. In fact, he’s so active in shooting digital content that there’s quite a collection of Bernardo Faria DVD instructionals available.

Before we look at the complete collection more closely, let’s talk about why a Bernardo Faria DVD is a great investment. First, you get to learn from a world champion, and multiple times one at that. Second, Faria is really easy to listen to and explains everything in tremendous detail. You’d be hard-pressed to find a Faria DVD that’ll raise more questions than answers. Third, he is a big fan of order and everything he demonstrates is perfectly systematized. In Bernardo Faria DVD you won’t find jumping from subject to subject or needles talk on various unrelated subjects. it’s all about the theme of the instructionals and how to integrate everything into your game as a whole system. Finally, the simplicity of his style means that it is going to suit anyone, regardless of belt level, age and/or athletic abilities. 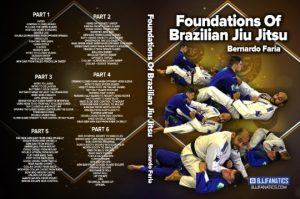 Foundations and Basic technique are most of the time something that wins in sparring and especially in tournaments. The foundations are especially very important when you’re just starting with BJJ. But even when you’re higher belt there’s always a huge chance that you miss some of the basics that could change your game completely. There’s an even bigger problem if you’re missing something from Jiu-Jitsu basics. If you miss something from basics you can’t do properly advanced techniques. There’s always something missing in a puzzle. That’s exactly where NEW BeFariao Faria DVD – Foundations of Brazilian Jiu-Jitsu steppes in.

In this Bernardo Faria DVD named Foundations of BJJ, he goes through all of it. It’s a compilation of everything that you need when you’re starting BJJ and also everything you need to learn in the first few years of training. It compiles (check the list) 90 techniques on 6 DVDs and that’s something you may not miss if you’re seriously into Jiu-Jitsu and especially if you’re at the start of your Jiu-Jitsu Journey

The Battle Tested Half Guard

For all you half guard players out there, this is the bread and butter of the half guard position. Beginner or advanced, young or old, male or female, this Faria DVD is one that will benefit you immensely. 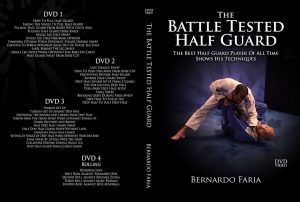 Across three DVDs you get to learn everything, from the very basics to deep half magic. Pull half guard, retain half guard, counter everything and attack with ruthless efficiency. The fourth DVD is a real treat, as Bernardo narrates rolls against top-level black belts while using his trademark half guard.  A true bible of the position that you can get HERE. 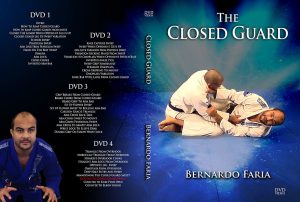 In a four-disc bundle, Faria takes you through all kinds of entries into the guard, followed by a wide variety of attacks. Lear the very dangerous technique of jumping guard correctly so that you can take anyone into your closed guard. Make sure you follow it up with enormous control that’ll lead your opponent’s into a trap of your choosing. On the subject of traps, Bernardo Faria has developed such an elaborate system based on basics that it’ll take you next to no effort! many many sweeps are intertwined by basic close guard submissions and even a few more advanced ones, for those feeling particularly adventurous.

This Bernardo Faria DVD fits in perfectly with the two previous ones. Once you have a great bottom game from both the half and closed guard, why not master a skillful submission as well? Despite often considered a fundamental move, the Omoplata is not a simple technique. It involves complex mechanics and many “moving parts” that can easily go wrong. 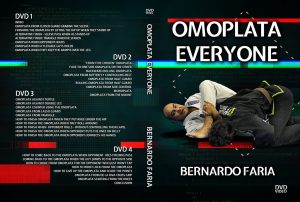 Bernardo Faria is a true master of this devastating shoulder lock. This DVD is a great progression through the world of the Omoplata. Faria demonstrates amazing finishing variations, fit for all levels of Jiu-Jitsu practitioners. Some of his alternative finishing variations are forever going to change your attacking guard game. No matter how strong or flexible your opponent is, Faria’s setups are foolproof and work on everyone. Furthermore, there’s no position that is going to keep you from entering the Omoplata. Entries are available from mount, turtle, topside control, half guard and virtually every position if you know what you’re looking for. Most importantly, the Omoplata Everyone DVD is going to teach you to counter-attack common passes with a brutal submission!

Now that all of Bernardo Faria’s favorite bottom game positions are covered, let’s see if he has something to offer in the top game department. Well, it turns out he has. It comes in the form of another 4-disc digital release dubbed Battle Tested Pressure Passing. 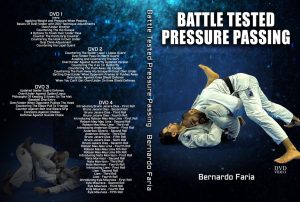 Why struggle with the guards of your opponents when you can make them give up a pass? No need to try and go through their structure when you can pressure them into submission. Pressure passing is arguably the best passing concept in BJJ. And there is nobody better at it than 5 times World Champion Bernardo Faria. His DVD is going to teach you how and when to use the famous Faria over underpass to great success! The over underpass can be used against every guard in Jiu-Jitsu, as proven by Faria himself at the highest level. Time to make everyone feel the pressure of an elite level passing game!

Do you remember the last time Bernardo Faria got submitted in competition? Neither do I and probably neither does he. That is because the Brazilian is notoriously hard to submit. Even if an opponent gets close there’s simply no way to finish a submission. And now you can learn the tricks of his trade yourself. 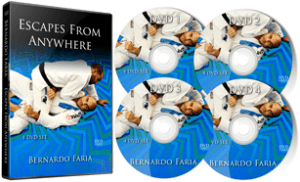 If you have a nagging position that you can’t seem to solve, this is the DVD to get. Bernardo Faria teaches you how to Escape From Anywhere regardless of where your opponent has got you. Mounted by a heavy opponent? No problem! People hanging on your back? Shrug them off with ease! Stuck in side control? No more! What you’ll get from this DVD is not only an escape option but also a route to a position of safety or a direct counterattack. Oh, and there is a complete volume dedicated to defending and escaping submission holds.

The No-Gi Half Guard

This is a red-hot release by Bernardo, one that affected the game of many grapplers both in Gi and No-Gi! While the half guard is a subject frequently visited by Faria, this time he ditches the Gi to freshen things up! The real hidden benefit of this Bernardo Faria DVD is that it can be used in both Gi and No-Gi Jiu-Jitsu. 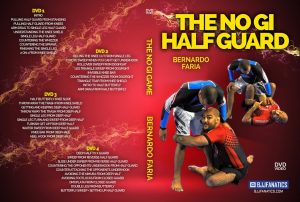 Once again, it’s a bundle of four highly detailed DVDs with a total length of about 5 hours! That’s 5 hours of Faria’s best methods of entering, retaining and attacking from the half guard! Sweep, submit or simply frustrate your opponents without any effort whatsoever! Discover how the deep half and other advanced half guard variations work in No-Gi so that you can confuse every opponent you come up against! This is the first No-Gi DVD by Faria and I certainly hope it is not the last, as it is every bit as good as his Gi instructionals. Perhaps even better!

The latest Faria DVD to extended his collection to a staggering 8 titles is a truly special one. this time, Bernardo outdid himself, and everyone else for that matter. The “Transition Mastery” DVD set is a unique BJ Jinstructional in both technical, organizational and every other sense. It is a view into the mindset and tactics of a multiple time black belt World champion like we’ve never seen before! 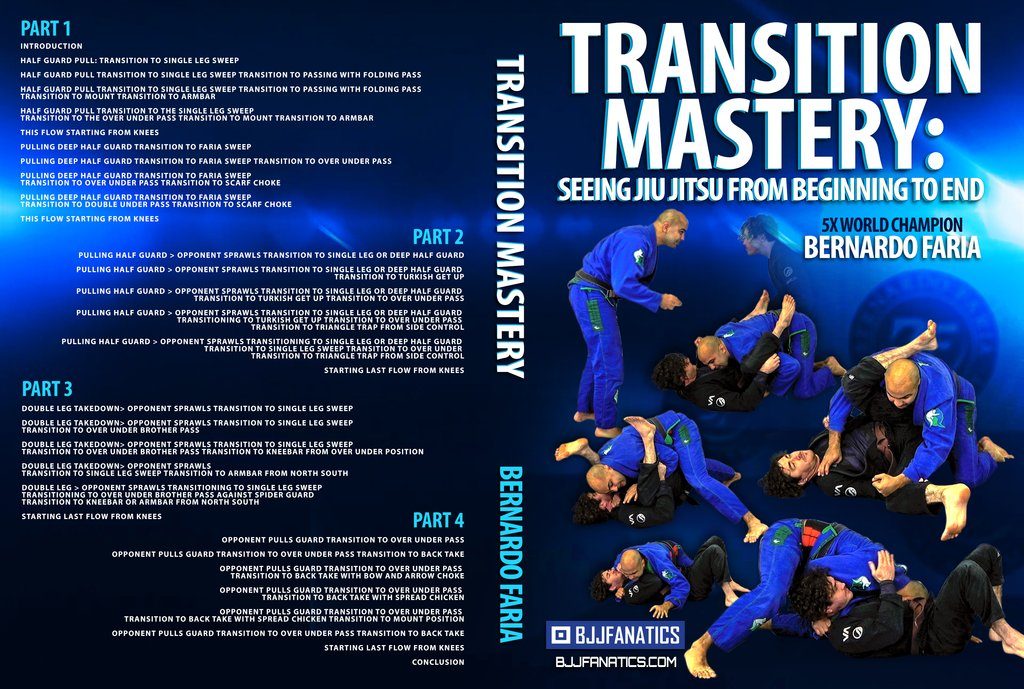 This four-part DVD set covers the invisible art of transitioning in Jiu-Jitsu. It’ll teach you why black belts always seem to know what step you’ll make next. It will also teach you how to do the same long before you get your black belt! The instructional focuses on how to pull half guard and go straight into sweeps, passes, and submissions. It also covers options for when your opponent sprawls in response to your guard pull. KNeebars, armbars and vicious chokes make sure you always finish the match. Furthermore, Bernardo covers double leg takedowns and all the transitions that come after completing one! Finally, you get to learn how to deal with people that beat you to the guard pull. After all, it’s much better to end up in an over-under pas position that someone’s guard, right? Well, now you also get to finish them while doing it.

Do not hesitate for a second to get this amazing release! It is going to change the landscape of Jiu-Jitsu, and the sooner you obtain it, the bigger advantage you’ll have on anyone trying to catching up!