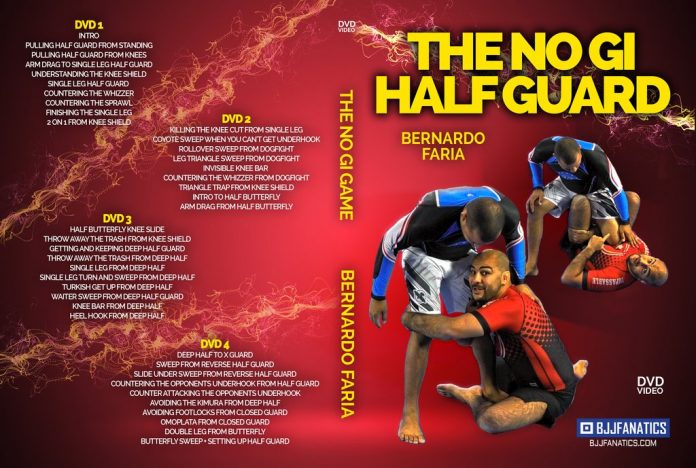 When the time comes for a grappler to take the Gi off and give No-Gi a try, the Brazilian Jiu-Jitsu guard game changes significantly. Grips play a huge part in Jiu-Jitsu and the Gi is very often a crucial mediator in terms of control. Without it almost every guard needs adjustments. Even the closed guard is more difficult to play since it gets harder to break posture and manipulate limbs in No-Gi. However, one guard remains as effective as in Gi Jiu-Jitsu even when you’re only wearing a rashguard and shorts. The half guard requires minimal changes in order to be effective and is the best guard option for people transitioning to No-Gi. To ease that transition, we present to you the latest Bernardo Faria DVD on the subject. This time, Faria goes No-Gi.

ON SALE:
Bernardo Faria DVD: The No-Gi Half Guard

As far as elite-level half guard players go, only a few might claim to be better than Bernardo Faria. While his half guard is impeccable, Faria is no one-trick pony. He is both well rounded in every aspect of Jiu-Jitsu and in every variation of his favorite half guard. So far, he has only addressed the position in Gi and has done so in-depth. Their area numerous Bernardo Faria DVD releases on the subject of half guard, and they’re all worth your time, money and effort. This time, he’s gone above and beyond in regard to the half guard. His latest release addresses a myriad of strategies and tactics for playing the No-Gi half guard. You don’t have to take my word on it, get your copy and see for yourself!

The Battle Tested Half Guard DVD by Bernardo Faria: https://bjj-world.com/review-bernardo-faria-dvd-battle-tested-half-guard/

Bernardo Faria is a very interesting character in the world of grappling martial arts. The Brazilian was born in 1987 in Juiz de Fora. His Brazilian Jiu-Jitsu journey begun at the age of 14. He started training at Ricardo Marques’ gym. He quickly became a fierce competitor, even as a Junior. Bernardo went through the belts fairly quickly, especially from purple to brown. A couple of years after getting his brown belt, Faria received his black belt.

After deciding that he wanted to pursue a career in Jiu-Jitsu, Bernardo moved to Sao Paolo joining Gurgel’s Alliance Team. Since then, Faria boasts an impressive 5 World Champion Titles at a black belt.

Bernardo Faria is a very technical grappler that has a half guard game from the bottom and pressure passing one from the top. He is incredibly agile for a super-heavyweight and doesn’t overcomplicate things. His half guard game is directly responsible for his success as a competitor. Lately, he took it upon himself to release detailed DVDs on his half and closed guard game as well as submissions in the Gi. So far he only produced Gi related material.

The latest Bernardo Faria DVD however, is a novelty. Despite tackling a subject that relates heavily to Faria, it does so from a different aspect. Finally, Faria reveals his No-Gi secrets in the half guard to make your guard game even tighter. The most beautiful thing? These moves work just as well with the Gi as they do in No-Gi.

A Bernardo Faria DVD is nothing new. If you’ve ever had one, you know what to expect. Bernardo likes to start things off simple and up top. He tends to follow the natural direction of things, slowly advancing towards more complicated scenarios. What stands out in a Bernardo Faria DVD is the level of detail he explains. Most people tend to keep a couple or more crucial details to themselves when shooting digital instructionals. Faria spares nothing and explains everything about each technique he demonstrates.

The No-Gi Half Guard DVD is another Faria classic. You get tons of material along with a guide to systematic progression through it. Every half guard question you’ve ever had is going to get an answer and a No-Gi one at that. Here’s what I think about it:

The material in Bernardo Faria’s No-Gi half guard DVD is spread across 4 discs of material. Each of the DVD’s has 10 or more chapters that go over a multitude of half guard variations. Each DVD lasts for over an hour, due to the extremely detailed explanations of each position and technique.

In terms of systematization, the first DVD starts at the same spot every grappling match does – on the feet. This disc outlines a complete strategy for pulling the guard off the feet. There are different directions in which to approach getting the half guard which offers multiple opportunities to grapplers with different styles.

Further along the way, the second DVD is a bottom half guard basics masterclass. Lot’s of counter moves are presented here, along with structural fundamentals and a few attacks. All in all A DVD for any grappler, regardless if they like the half guard or not.

As the material goes into more advanced positions, the structure remains clear. There is a clear connection between the standing, basic and more advanced techniques at all times. Faria himself points out when you can think about using one of the previously outlined moves in given situations. This release is not just a half guard system, but a complete and very comprehensive game that is going to be a problem for grapplers of all levels and sizes.

First and foremost, the quality of the recorded material is extremely high. You can hear Bernardo clearly from every position he gets in. The camera keeps him focused bang in the middle which is great for both recreational viewers and more analytical ones. If you’ve ever tried to analyze a fight or a DVD more closely, you know what I’m talking about. If you try to use the zoom function on a player in order to look a ta certain detail and the camera is off, all you’re going to zoom in is the background. Not with this Bernardo Faria DVD. If you want to zoom in you’re going to get exactly what you’re looking for.

From a Jiu-Jitsu standpoint, Faria’s quality is unquestionable. Everything he demonstrates works, once you understand the underlying concept. For example, when you understand how to pull the half guard you can give every standing variation a try. Faria demonstrates how to use the arm drag, single leg and a bunch of counters to enter the half guard.

As far as attacks go, you’ll have to limit yourself to a few. There are so many sweeping and submissions options that I doubt anybody but Faria can master them all. It is a great goal to do so, regardless. I personally loved the invisible kneebar setup and everything related to the half butterfly variation. That doesn’t mean that I’m not going to give the deep half guard a try. And yes, you can do the deep half in No-Gi. Bernardo Faria is going to teach you how.

So, should you get this DVD if you’re a white belt? How about a purple belt at, let’s say, 35 years of age.? What about all the recent black belts out there, or even more experienced ones?  Well, there’s a simple answer for each and every one of these categories, and all others I’ve omitted. Yes, you need to get this Bernardo Faria DVD. You actually need this one more than his previous Gi releases.

The new student is going to learn structure, attacks, and entries that are a great base to build on as they progress. The more experienced and “old” grappler gets a position of extreme safety that requires next to no athleticism. And yet, you still get to sweep, submit and control al kinds of opponents. For the black belts with a decade of experience, it’s all about the details. That elusive little twist of the arm nobody explained about the Waiter sweep? Well, it’s here and Bernardo sheds light on it, and a bunch more others. So grab this DVD while it’s hot and get a leg up on your opponents and training partners!

ON SALE:
Bernardo Faria DVD: The No-Gi Half Guard