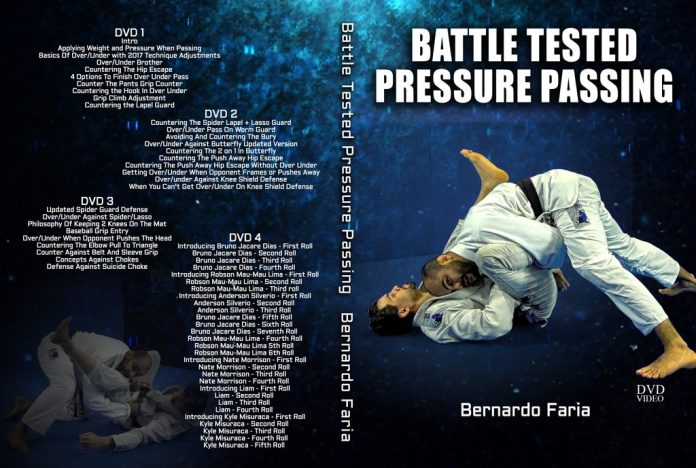 When I started BJJ I loved playing the guard game. The closed guard was my first love, after which I discovered open guards and built a whole game around it. Much like most of the people that roll do. During that time though, I never really paid attention to passing the guard. Despite having a strong top position game, my passing, in particular, was horrible. Basically, I did not enjoy passing the guard as much as I did playing it. Until I discovered pressure passing. Seeing Bernardo Faria dominate high-level black belt opposition by slowly destroying their guards with pressure changed the way I see BJJ forever. Finally, I had a passing style that really suited me. Now, all it took was learning it. And there’s no better resource than the “Battle-tested pressure passing” Bernardo Faria DVD.

Needless to say, Faria is a black belt that knows what he is talking about. He has multiple world title to his name and a very specific grappling style. He is a half guard magician, particularly from the deep half. Faria is also an impressive pressure passer, the over-under pass being his favorite tool to dismantle people’s guards. Bernardo is basically unstoppable from the top. He has a methodical approach that is now available for everyone to learn. This Bernardo Faria DVD is a true masterpiece that includes all of his latest guard passing tactics and techniques.

Bernardo Faria is not one that releases the odd DVD every now and then. He is a regular in the department of creating digital content. What is even more amazing is that he manages to retain a very high quality of content with the high frequency of releasing material.So far he has content on all of his favorite positions, meaning you can develop a very effective grappling style by picking up his products.

For me, the Battle Tested Pressure Passing Bernardo Faria DVD is the one that anybody that grapples need to have. Faria’s approach is as unique as his teaching style. When he passes the guard Bernardo looks to stay completely safe while exerting intolerable pressure on the opponent. Before watching his material I never connected pressure passing with being on your knees.

Bernardo offers a lot of information but everything is easily understandable due to his teaching style. Faria is very easy to listen to and likes to base things on concepts. When he’s explaining the techniques, his immense grappling experience is immediately apparent. He anticipates the questions you might have while watching the material and covers every subject. All little details, from grips to body positioning are covered so that you end up with a complete system.

Be prepared to spend a considerable amount of time, however, on simply going through the material. The material is spread across four discs, each filled to the rims with content. Faria likes to include as much information as possible, as he does, so you can expect a very wide variety of guards. The material is chronologically structured, so jumping straight onto the third volume won’t do you much good. Start at the very beginning and as you get to the end everything is going to be crystal clear.

From a technical standpoint, this Bernardo Faria DVD starts by treating everyone watching it as a white belt. Faria explains how weight distribution works in terms of passing the guard. Passing pressure is more dynamic than pressure from mount or side control, as Bernardo explains. From there on, he teaches the over-under pass like nobody else in the world. Honestly, I expected as much, seeing as this is his favorite move to use in competition. When performed correctly, this pressure pass is unstoppable. Even in cases when an opponent might look to escape and re-guard from a distance, Faria has options. I really loved the prevention of escapes concept, because you take away every opportunity from the bottom person.

Furthermore, Bernardo goes over every guard variation you might come up against while rolling or competing. Lapel guards, spider guard, BUtterfly guard, you name it. Whatever guard your opponents decide to play you will have answers based on pressure. Even the dreaded worm guard has a weak point that Bernardo identifies and exploits with his over-under pressure pass. Once again, the focus is as much on counterattacks, or more specifically, preventing them. Faria offers ground-breaking concepts to deal with every escape or counter an opponent might use.

The real value of this Bernardo Faria DVD is in the final volume. In typical Faria fashion, he doesn’t just settle for demonstrating techniques but presents them in real situations. The final volume contains more than 20 rolls with the high-level opposition. During the rolls, Faria focuses on using the material he presents in the release. The rolls are narrated by him as he analyzes every situation that comes up and how to use his pressure passing concepts to deal with it.