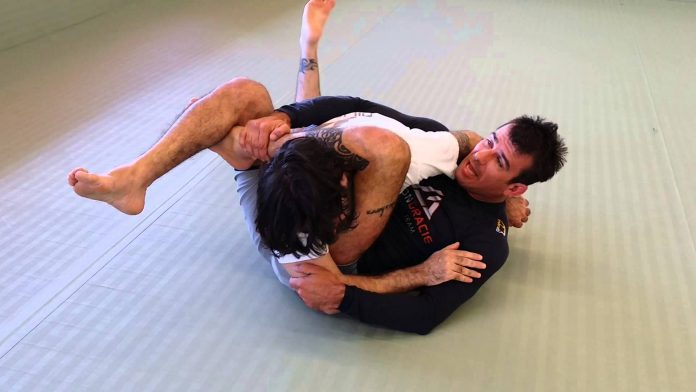 The triangle choke in Brazilian Jiu-Jitsu is far more than just a technique. First, it is a very very effective move to finish any opponent. It works at all levels, from white to black belt and across all competition formats. Furthermore, the triangle is one of the most recognizable symbols of Brazilian Jiu-Jitsu, Plenty of associations out there have adopted the triangle into their academy logo in one way or another. Gracie Barra is arguably the most famous one that has the triangle as their representative. So, it is no wonder that a variation of the technique is so favored by one of GB’s standouts, Victor Estima. Victor and his brother, Braulio, are known for their prowess with triangle chokes and in particular, the reverse triangle choke.

What the Estima brothers did is take this variation to the highest level imaginable. The reverse triangle choke does not differ greatly to the traditional triangle. It’s only about angles and details, as we’ll see further on. The trick is that while the regular triangle is most often done from full guard, or, in some instances, from the mount, the reverse triangle choke can be set from a multitude of positions. This diversity means that those who master this less known Jiu-Jitsu choke are going to have enormous success with it.

Sneaky Reverse Triangle Choke Attacks Off Your Back

While on the bottom, the positioning of your partner’s body opens them up perfectly for the reverse triangle. Their head is already on the side you want it and it is fairly close to your legs. Moreover, you do not need to overexert and move in order to trap the head with your legs. It just takes a little reverse crunch and you’re there. Once you trap your opponent’s head you’re halfway there. The focus is now on trapping that opposite side arm so that you have shoulder pressure to finish the choke.

Getting to the opposite side arm is very easy if you’re proficient with the move. If you’re a bit slow, and your opponent is aware of the danger, though, you might need to work for it. Namely, once you get their head they’ll try like hell to posture up before you trap the arm. Luckily there’s a very easy solution on the subject. here’s the sequence of events you need in order to hit the reverse triangle choke from the bottom. The leg over the head si the first thing you need to look for. Then, look to control the arm that is closest to you with your hands. You might even threaten with a straight armlock to switch their attention. That way you both get better control, other attacking possibilities and the opening you need to close the other leg into the triangle. The tap is imminent.

N terms of getting triangle s from the top, unless you’re into flying submissions, the mount is the only “classical’ attacking position. Even then, you’ll need some elaborate maneuvering against a seasoned opponent.

From there you need to get your other leg over their head. the beauty here is that you could do all this while attacking a kimura or armlock on the opposite side arm. If arm lock attacks fail, all you need to do is either lock your legs right there or roll your opponent over on top. Don’t worry about giving up a position as there are no points for side control reversal. Also, you’ll have them in a tight choke that’s extremely difficult to escape. Of course, the arm locks are still viable threats from there. So, however you look at it, you’re going to get the tap.

For more hidden Jiu-Jitsu moves and secrets, including the reverse triangle choke, make sure you look into Luis Panza’s “Hidden BJJ Secrets” DVD set. Check Techniques list and everything that Luiz Panza Offers in his Instructional.