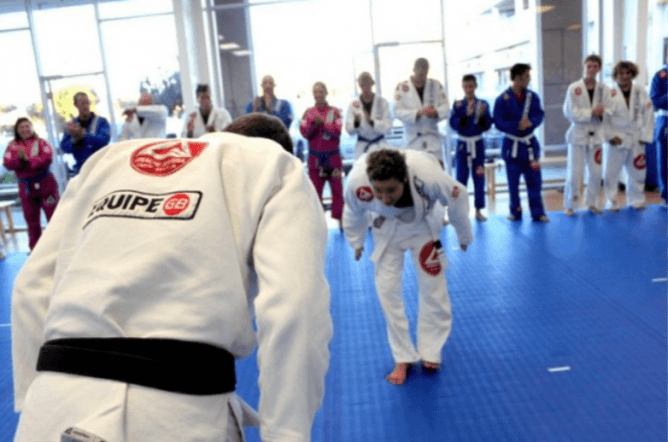 Have you ever wondered what does Oss means and what is the word OSS meaning? Oss or Osu or even Osss is one of the phrases most often associated with Brazilian Jiu-Jitsu, and other martial arts with Japanese roots. Although BJJ is a lot less ceremonial than eastern martial arts. Nothing with an Oss remains a big staple although, many BJJ practitioners don’t know the meaning of OSS. You’re going to hear the word “Oss” when you enter a BJJ academy almost everywhere in the world. It’s almost as certain as the fact that you’re going to tap during class.

Contents hide
How Do You Pronounce Oss?
The Origins of OSS And Theories
Onegai Shimasu
The Good Morning OSS Theory
The Kyokushin Theory of OSS
Oshi Shinobu
What’s The OSS Meaning?
Meaning of OSS in Brazilian Jiu-Jitsu
Who brought OSS to Brazilian Jiu-Jitsu practitioners?
What does OSS mean in MMA
Examples of OSS used in Martial Arts Gyms
When To Use OSS And When To Not
When should you say OSS in Japan?
The State Of The Phrase OSS Today

How Do You Pronounce Oss?

In most cases, pronounce depends on your gym and your head coach and the way he uses it. You can say short OSS (oh-ss) or long OSS (oh-sssss).

Also, in some gyms, people use OSU which pronounces as strong and short (oh-su).

The Origins of OSS And Theories

Some researches show that the word Oss first appeared among Imperial Japanese Navy Officers in the early 20th century. They would use it as a greeting, but there are a lot of other theories.

Word OSS used today in most BJJ dojos around the planet are a clear reminder of BJJ’s Japanese roots. As most of you know, BJJ started in Brazil as the development of Mitsuyo Maeda’s Judo expertise. Since it all began with the Japanese martial arts, it is logical why some Japanese formalities or “reiho” found fertile ground in Brazil.

Here are the main theories related to Word OSS and its origin.

Today, in every Japanese martial art gym or dojo in the world, when the teacher or sensei, bows to the kamiza (a shrine usually containing a Grandmaster’s photo) and then bows to the students, the students reply: “ONEGAI SHIMASU!”

At the end of the lesson, while they bow to the teacher, the students reply “DOMO ARIGATO ONEGAI SHIMASU!” “Onegai Shimasu” at the begging of the lessons demonstrates the students’ will to participate and learn, bluntly translated it would mean: „Please let’s do it“.

The other, longer version, which also contains the words “Domo Arigato” (Translating as “thank you very much”) could translate as „Thank you very much for your teaching“. So, the root meaning of Oss in Japan is a demonstration of gratitude for the knowledge shared by the instructor. 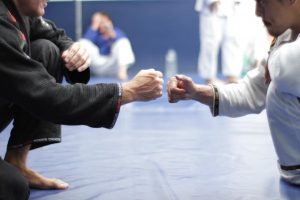 Because we Westerners tend to shorten the expressions, especially those we are not familiar with, in time, the expression „Onegai Shimasu“ slowly abbreviated into Oss, commonly used today.

This theory suggests that OSS/OSU could’ve come from Japanese Linguistic Professor Mizutani Osamu’s test. Every morning he would greet random people by saying the traditional Japanese good morning phrase “ohayo gozaimasu”. While doing so he would note every response he would receive.

What’s even more interesting is that most masculine men would shorten the return greeting. So, if you take into consideration that usually muscular people train in combat sports this theory makes sense.

So, according to this theory, the real OSS meaning is actually a short saying of good morning.

The Kyokushin Theory of OSS

In Kyokushin Karate dojos, the term OSU is a very usual term, but comes from the loner phrase of “osu no seishin”.

It’s actually a combination of two different Kanjis. The verb, OSU means “to push”, and Shinobi means “to suffer” or “to endure”. When those two verbs are put together they create a lot of interpretations.

If you google that sentence you’ll get many different things that could actually represent the OSS meaning. Here are some examples of what does Oss mean:

“The Importance of effort”

“Not Showing is Suffering”

“Advance with a steady and positive attitude”

“The power of will”

“Overcome the obstacles by going through them”

When some people in Japan would look for a verbal manifesting of “Chi Energy” they would say “Oshi Shinobu”. In the book, “Book of five rings” or “Go rin no sho”, written by Miyamoto Musashi is explained the meaning. Musashi wrote that Samurais would use OSS/OSU or other similar phrases to muster their inner strength on three occasions. Before the fight, in the middle of the fight, and after the fight.

According to this theory, the meaning of OSS is actually a war cry used on the battlefield to raise the combat spirit.

The meaning of Oss is a diverse one today. When looking to answer the question “what does OSS mean?“, and “what’s the OSS meaning?“, the phrase has less of a courteous and more of social meaning.

The word Oss is the go-to phrase used for greeting or an acknowledgment of understanding demonstrated techniques. It can also be shared as a compliment for a particularly impressive competition, or rolling performance. For example, you could hear an entire arena muttering “Oss” in admiration of berimbolos when they first appeared.

Although not as distinct as in Japanese culture, respect remains a huge part of Jiu-Jitsu. Some schools, like Gracie Barra, have kept more of the traditional elements than others. In a GB academy, people bow before entering the dojo, often accompanied by Oss. This is meant as a token of respect towards Carlos Gracie Jr, the founder. Like Eddie Bravo’s 10th Planet, other schools do barely any bowing, but word Oss is still muttered in respect.

So, in general, the word OSS is mutual respect between two sides. No matter the philosophy of an academy, the meaning of Oss revolves mainly around respectful behavior on the mats. 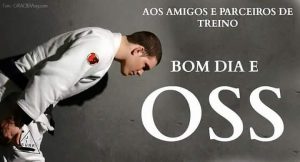 Meaning of OSS in Brazilian Jiu-Jitsu

Just like in other martial arts related to Japan there are three main meanings for OSS in BJJ today. To sum it up, today, OSS means:

Response: If you want to say you understood something, or you acknowledged something saying OSS is a good way to do so.

Respect: If you want to show respect to your instructor or your teammates, bowing and saying OSS is probably the way. You can wave them goodbye with OSS or greet them when you see them.

Also if your instructor demands using OSS in the beginning and at the end of class it’s also a sign of respect.

Compliment: Loud and deep pronounce of Oss is used when someone pulls some good technique. You can usually hear it in tournaments, but in gyms too.

Encouragement: Encouraging your teammates or just trying to tell them they did something well is always a good gesture. Using OSS, in that case, is a good way to encourage them.

Grandmaster Carlson Gracie brought the term OSS to BJJ because he was taught by Mitsuyo Maeda who would use it often.

Apart from that Carlson’s idea of using OSS in BJJ is to show mutual respect between Brazilian Jiu-Jitsu practitioners. But also to show respect to martial arts like Judo, Karate, Jiu-Jitsu, and others that came before BJJ

What does OSS mean in MMA

At the beginning of MMA itself, the word OSS was widely used.

The fighters themselves would come from different sports and cultures, so they wanted to present their sport and their gym in the best possible way by pronouncing OSS.

One of the most popular fighters in the world, George St-Pierre would greet everyone with OSS every time he would step into the octagon. He would also wear a Japanese Gi with a rising star stirnband representing the culture of Japan.

For now, it can be said that the word OSS has been eradicated from MMA.

Most of the time you’ll hear OSS in different situations. Although, it’s used in normal conversations too between two practitioners of the same martial art.

Below is the list of situations/conversations when OSS is used in gyms.

Class Intro And Outro As A Greeting: When the class is starting students line up with their professor in front of them. After a short professor’s speech, he bows and greets and students respond with OSS.

The same bow and greeting with OSS happen after the class is done.

Partner Drills and Sparrings: You can say OSS in rolls/sparrings or when drilling when you want to praise your partner. Instead of saying “nicely done”, “you performed great” or “good technique” you can simply use the term OSS.

Internet communication: I’ve noticed that many people in BJJ finish online conversations by saying OSS. So in this case the OSS meaning would be “goodbye”.

When To Use OSS And When To Not

Just like with everything there are do’s and don’ts when using OSS. Here are two main things to remember in case you’re used to using OSS.

When should you say OSS in Japan?

In the case, you find yourself in Japan using OSS is reserved only for special occasions. So, definitely avoid saying Oss to a Japanese person unless that person is:

In Japan, the term OSS is a mark of assertiveness and masculinity, so in the case of the wrong usage of the phrase, things could get messy.

The State Of The Phrase OSS Today

As mentioned above, BJJ academies are in general considerably more laid back than traditional Japanese schools. While you can get away with “Oss-ing” your way everywhere around a BJJ gym, you should take more care in the East.

First and foremost, avoid saying it to a Japanese person. In Japanese culture, the term is an expression of assertiveness and may lead to miscommunication. Unless you’re addressing a younger person, and/or someone with a lower rank, you should avoid pronouncing it. This is particularly true if you are a female – avoiding Oss completely is your best bet.

While not as a big deal as in the East, there is the potential of overusing the phrase in the West. It is perfectly fine to use it in the correct context, but avoid making it a meaningless repetitive syllable just for the sake of saying it.

The meaning of Oss is a multi-purposeful one, ranging from “hi” to “excuse me” to “let’s roll”. So, next time someone asks “What does Oss mean?”, or “What’s the OSS meaning, know that there’s more than one correct answer. And no, it is not always appropriate to use it because you can misinterpret OSS meaning and look weird.