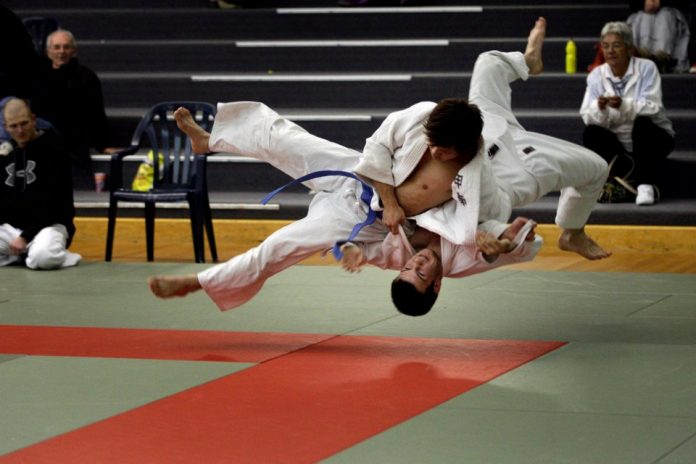 Judo throws for BJJ. A subject that has been beaten to death over and over again. it works and we should use it. Cool. But then again, when we take a look at the Judo throws for BJJ that we use, and we’re down to only a few moves. Foot sweeps lead the way, with the odd Uchi Mata and occasional Sumi Gaeshi sneaking in as well. Not really the best return from the art that’s not only the predecessor of BJJ but also has loads and load more techniques to offer. Like for example, shoulder throws. Hera re a few that can really help you get a match to the ground. Or a fight.

Judo is a really cool martial art to train in. Modern Judo is just a fraction of that art. Across the world, people usually focus on the modern version, or the sports Judo, if you will. This is understandable as Judo is not only a huge sport worldwide but also an Olympic one. The rules and regulations that plague it, though, put heavy restrictions o what people can use in competition, and in training. This means that even BJJ folks that cross-train in Judo or simply looking to improve their top game, mostly get access to this restrictive and not very rich game of Judo. This doesn’t have to be the case as there are plenty of Judo throws for BJJ that are perfectly legal to do in Jiu-Jitsu, despite being outlawed in Judo. My point is, Judo has a lot more to offer than we’re getting gat the moment.

What do you think of when you hear or read the phrase “Judo throws for BJJ”? Most will imagine GI grips, and someone performing an Uchi Mata, or perhaps even a hip throw on an opponent. As previously stated, most of the Judo throws we associate with BJ are not even throws by nature – they’re sweeps. This is far from ineffective, but it is also just a small fraction of what Judo has to offer.

For starters, we need to change our overall perception of Judo throws for BJJ. Why does Judo have to be the option for Gi Jiu-Jitsu, and we need to switch to wrestling when we go No-Gi? As proven many times in MMA and grappling, Judo throws for BJJ work just as well without a Gi. And you don’t have to be Ronda Rousey or Ffion Davies to pull them off. So, forget about grips, Judo stances, and all that jazz. Unless you’re into learning Judo as an art, which will take you a decade at least (regardless of belt color). If you want to introduce Judo throws for BJJ you need to look at what works for Jiu-Jitsu, rather than what Judoka’s do, or are allowed to.

IN that sense, there’s no real answer to the question ‘Why don’t we use shoulder or hip throws more in BJJ”? Apart from perhaps the Ippon Seio Nage which can open up back attacks (as both a Judoka and BJJ instructor I strongly disagree) other throws are not that “risky”. This is particularly true for shoulder throws. They might seem like too much work, but in general, they take less effort than sweeps, double legs, or battling for the front headlock. The Kata Guruma is a great example.

Why Shoulder Throws Are Perfect For BJJ

So, what are shoulder throws in Judo? Well, any throw where your opponent gets hauled over one or both your shoulders, is considered a shoulder throw. Now, I said “hauled” intentionally. You don’t have to be standing, with a san opponent over both your shoulders, like in WWE, making a dramatic pause before you slam them to the ground. The level has everything to do with it, but you don’t have to be standing to do it. Quite the contrary.

What we usually see is people trying to get the collar and sleeve grip and battle for Judo throws for BЈJ from there. No need. It is more than enough to control one shoulder completely and have a hold of the top half of your opponent.  Combine his with the correct angle and you have the perfect recipe for exciting just about and Judo throw, and especially shoulder throws.

The reason I love shoulder throws like the Kata Guruma is the surprise factor. You disappear from your opponent’s line of sight for a short while, but you then pop back up before they’re aware of what’s going on. This s level change at its best. Unlike double or single leg attempts, the movement is not linear, so instinctive reactions will only get the opponent in a worse spot.

First up, the following shoulder Judo throws for BJJ all work in both Gi and No-Gi. Moreover, they work with the exact same grip, no adjustment needed. Basically, these are all variations the Kata Guruma, AKA the fireman carry. The work, however at different levels, offering you different options against different opponents. The perfect storm.

There are two huge things to remember before going for any shoulder throw. The first is posture. If your posture is broken, no shoulder throw will work for you. This is more than obvious, as you’re using your shoulders to actually transfer the weight of an opponent. So, you need strong, and somewhat rigid posture for all variations of this, and all shoulder throws in general.

One more thing to remember, which is pretty much universal for grappling martial arts, is to keep your elbows close. Not while you’re shooting to enter or adjusting, of course, but the moment you want to throw someone. You’ll need to keep your elbows tight to your body if you don’t want them to escape. Particularly with the variations of shoulder throws that are done from lower.

The standing Kata Guruma is what we usually think of when someone mentions the name. In most cases, it seems like there are too many steps to set it up for BJJ. This does not have to true. Instead of that boring old and ineffective collar and sleeve 50/50 grip, go for an overhook. The further you can reach over and grab the triceps of an opponent. The better. If you can trap their palm underneath your armpit, even better. This is the starting position for all Judo throws for BJJ we’ll be looking at today.

After posture, your most important cue here is the angle. To get a Kata Guruma you need to step in, similarly to a penetration step. However, you need a strong posture to avoid guillotines and/or people spinning you around. What helps you get into position is the angle. You need to enter at a 90-degree angle compared to your opponent’s torso. DO that, and you’ll be in safe and in prime position for the throw.

The finish is easy. When you step in at the 90-degree angle, look for a sumo deadlift type of stance. This is the moment when you pull both elbows to your body, and you stand up. Now you’ve got your opponent where you want them. For a finish, don’t try to throw them over the opposite shoulder, but rather in front of you in a twisting style. The goal is to have their head in front of your foot, and their feet as far away from you as possible.

If you’re fighting in the absolute and are a smaller grappler, the standing Kata Guruma might not be your best choice. That’s where you can go for the drop version of this shoulder throw. This is faster, requires less strength, and works against bigger opponents. It is also faster.

The entry is pretty much the same – posture and angle remain unchanged, as does the initial grip (the overtook). If you drop too low (bad posture) you’ll give away your back or a front headlock. So keep the posture upright.  This time when you do the penetration step, you drop completely to the knees with both your legs. Your free arm once again has the task of grabbing s deep as possible behind the knee of the opponent’s leg.

Elbows together will ensure that the opponent can’t wiggle out. This is where you lift slightly off the ground (butt off heels) and finish in the same way as before .the difference with this is, since you’re lower, you get to go directly to knee on belly, while still controlling one arm with an overhook.

This is the fastest and sneakiest of the Judo throws for BJJ based on shoulder throws. It is also the one done from the lowest possible position. For this, you start off with the same grip, and the posture rule still applies. However, you want to change the angle slightly, because you do not need to turn to 90 degrees. Around 45 degrees will do the trick but you don’t have to be precise. What you need to aim for is to sit on the foot of the front leg of the opponent.

The goal of the entry is to get your hips as close to the lead leg as possible. Simply sit down to a hurdle stretch position, trapping the foot and grabbing the leg, like in previous Kata Guruma variations. That’s it.

This one is by far my personal favorite. It is lightning quick (you just sit down) low risk (trapped foot plus the grips) and you end up in a great position too. For the throw itself, you just lie to your side and the opponent will fly over. Keep hold of both the leg and arm and you’ll spin right into knee on belly or an armbar pulled by the inertia of their fall.

Judo throws for BJJ are not just a couple of foot sweeps and an Uchi Mata attempt. You can go in many different directions, depending on the rule sets. Even fun stuff like scissor takedowns (Kani Basami) is a great option, rules permitting.  However, shoulder throws are legal, effective, you can learn them quickly and they work against anyone. Plus, not many people are doing them at different height levels, like the examples above. Why not master these for your takedown game?