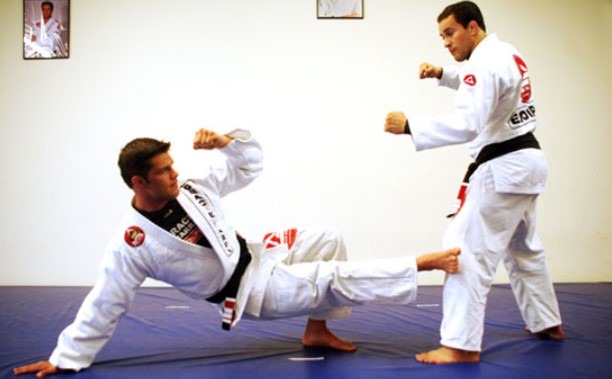 There are a lot of questions about differences between Sport Brazilian Jiu-Jitsu vs Self Defense Jiu-jitsu. Those questions are usually coming from people who are mostly interested in just Self-Defense aspects of Jiu-Jitsu art.

Nobody in Sport Jiu-Jitsu camp is saying that if you get in a street fight that you should immediately pull inverted Guard or some kind of reverse de la spider guard and try to score advantage and keep your opponent there. There is definitely no one saying that in any aspect of sports Jiu-Jitsu.

Let’s take Draculino for example. Draculino is one of the founding fathers of the spider guard. And in Draculino academy they are teaching stand up, clinch, stabilization, side mount etc… they were doing 1 on 1 self-defense. There are no academies that are good in sports Jiu-jitsu that never do anything relevant to self-defense.

What’s actually relevant in self-defense? Taking the guy down or getting to the top position, passing the legs, stabilizing on top, get your opponent to turn and choke him out, right?
Guess what, this will get you a whole bunch of points in competition and is happening all the time in the street fights and this will win you a lot of street fights as well.
It’s not like there are some magic self-defense techniques that work only in self-defense that sport Jiu-Jitsu guys don’t know.

The main ability of an art of Brazilian Jiu-Jitsu is to work against the pressure. For example, let’s take the most combative BJJ guard, the closed guard. Nobody is arguing that a closed guard is a good form of controlling your opponents when they’re trying to punch you. And let’s take one the least competitive form of open guard, the reverse de la spider.
After that let’s say you take someone who trained all forms of the closed guard but they never sparred it and you take somebody else trained in all sports techniques of reverse de la spider but they’re sparring it all the time against resistance. Who would you bet on?

If all your learning is based on magical self-defense techniques and you’re never applying it against resistance it’s like reading lines in a play. It’s not like having a conversation. It’s not like you and me sitting down having a conversation.
It’s like a line in a script says, “punch with a right hand and I’ll slip to one side and then I’ll apply technique number 1.”. That is a play, a procedure and it’s not working in a real fight.

If it comes down about you choosing between the academy A with more self-defense Jiu-Jitsu or academy B with more Sports Jiu-Jitsu, which one would you choose?
I wouldn’t go with sport vs self-defense. There is more about it there. Do you like the instructor? Do you like the people in that academy? Do they train against the pressure? Do they have some form of sparring? Those are the more important things than to think about self-defense vs sports aspect of the art.

Let’s say you go to train to a “sport” based academy and you’re still worried about self-defense that’s ok. Once in a while, once in two months, three months, even six months do some sparring on the ground wearing MMA gloves and mouth guard and do some light punching with 10, 20, 30% of contact. That will very quickly calibrate your BJJ to a self-defense thing.

Do a little bit of kickboxing, MMA and do your sport Jiu-Jitsu reverse de la spider guard and every few weeks go do an MMA class to calibrate your brain that you might get hit. Calibrate your brain that you need to control distance much more intelligently. Not too close and not too far away because good Jiu-Jitsu is always better than bad Jiu-jitsu.

Don’t expect one place to have 24 magic techniques that you need to learn to defend your self at the street and the other place just do the sport stuff and don’t have any street application.
Training your ability to react to pressure is way more important than those magic techniques.
Actually, the most of the Gracie Stand Up techniques that were popular 20-50 years ago are not actually very good.
The fact is that the Gracies don’t use those techniques when they’re fighting in MMA. They don’t use hip tosses like, Gracie Jiu-Jitsu against punches… close the distance, hip toss then armbar. I’ve never seen anybody do that neither Gracies never do that. They’re using single legs and double legs and much more MMA based platform techniques.

There’s another terrible technique when someone is attacking you with the overhand knife attack and you catch the knife and you apply the standing figure four… well, good luck with that. It’s a complete fancy technique with some outdated Jiu-Jitsu techniques from 1930’s in a style of “Japanese super secrets revealed”.
To be honest, there are much better ways to do something like that. So a lot of this magical self-defense on the feet I don’t really like. I don’t really think they’re effective as they are reported to be.

At the end of a day, on the ground, you’re gonna learn bridge and roll as a mount escape whether you go to the sport based place of self-defense based place just like any other good BJJ ground technique. You go to train where ever you know they’re doing good Jiu-jitsu. Good Jiu-jitsu always beat bad Jiu-jitsu and that’s more important than sport BJJ vs Self-Defense BJJ.

Train at the place where you like the instructor, where you like the other students and where’s you’re gonna go cause it’s closer to you and not super far away… That’s way more important than this Sport vs self Defense Jiu-Jitsu question.

BJJ White Belt Survival Kit: 5 Essential Tips For Beginners
Jocko Willink Explains Why Running Away is the Best Self Defense
No Time To Train BJJ? Here Is How To Make Time For Grappling
Rener Gracie: Even if You’re Purple Belt You Can Get Beat Up on the Street
The most Effective Jiu-Jitsu moves for a Street Fight
Which Martial Art is The Best for the Streets