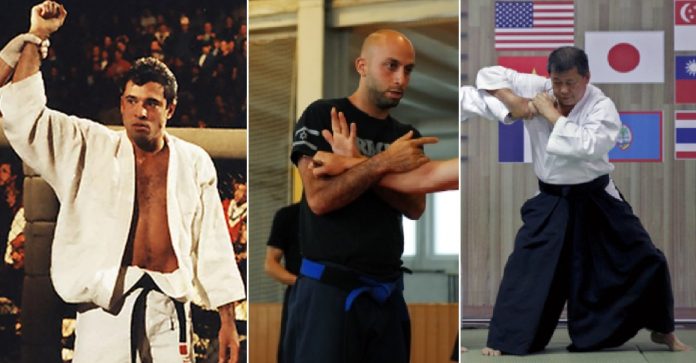 About me and my experience with Martial Arts

I started training Karate as a kid for 10 years. After that, I’ve spent almost two years training Krav Maga. I was training KM till I got into a real street fight with some random dude and I was disappointed in myself. After we were just swinging around I figured out I miss some real sparring. I figured out I had no clue about the fighting and felt like a regular guy with no MA training at all.

I switched Krav Maga to Muay Thai and I can say I felt awesome after only a few months of training. I finally felt like I know something. Real sparrings and real techniques changed the way I think about martial arts. I trained Muay Thai for more than 3 years until my very good friend who was training BJJ for only 8 months challenged me to an MMA fight.

I can’t say for how long I was on my feet, but the first clinch which I thought I’m good at got me to the ground. I was submitted not much after that even though we were practicing some ground defense in Krav Maga.

I can’t express enough how bad my ground defense was against someone who was training BJJ for only 8 months at the time.

And that, again, changed my perspective about fighting.

I joined BJJ school and now I’ve been training BJJ for 8 years.

So, I’m in Martial arts my whole life and I believe I’m qualified to talk about which martial art is the best for self-defense and the streets.

Why Brazilian Jiu-Jitsu for Self Defense?

If you’re looking for the best martial art for pure self-defense you should definitely train Brazilian Jiu-Jitsu. It’s one of the few martial arts that is possible for you to fight against anyone.

No matter your opponent’s size and strength, you will be able to use your techniques.

What’s even more important you’ll come out as a winner in most cases.

If you look at the early UFC’s where you had all pure arts that were pinned one against another and we all know that Royce Gracie came out on top of all of it using Brazilian Jiu-Jitsu.

That’s the thing that proves some martial art is really working.

Brazilian Jiu-Jitsu vs Other Martial Arts

What we could see is that pure Jiu-Jitsu vs pure boxing or pure wrestling or any other martial art Jiu-Jitsu will win most of the time. When I say pure I mean PURE because a lot of guys will say, for example, Demian Maia lost to Tyron Woodley.

I’m talking about pure martial arts and Woodley is Mixed Martial Artist. He’s well-rounded in BJJ, wrestling, and stand-up martial arts. Times changed so in today’s MMA there is no martial artist stuck to only one martial art.

Most of them, especially those on top, are complete fighters. They’re training everything that works in MMA and we all know that BJJ is a good part of it.

There are no rules in street fighting, but…

A lot of people will claim that this isn’t really true that BJJ is the best martial art for the streets because the street has its own rules.

Of course, there is a difference.

There will be eye-gouging, biting, groin kicks, and punches and yes, these things can make a difference, but not in the percentage that anyone saying this really thinks.

But do you think that the BJJ practitioner can’t bite you or eye gouge you? It’s not really something that you have to practice for years to be capable of doing. There is no skill involved in it at all.

Let’s take a look at groin kicks that, for example, Krav Maga is full of.

Do you think that some good Muay Thai practitioner can’t kick you in the groin area?

He’ll kick you in the groin area, much harder and faster than any Krav Maga practitioner will. He’s kicking thighs every day so few inches up won’t make any difference to him. And, it’s nonsense to speak about who will avoid any kicks or punches better.

Anyway, if you didn’t know, groin kicks and punches were allowed in the first UFC’s and they didn’t make any difference.

What I wanted to say is that training groin kicks, eye gouges, biting, and similar stupidities like that, are nonsense. It’s foolishness to go somewhere where you will be training for years and years to be able to poke someone in the eye or kick him in the groin. It simply doesn’t make any sense.

But why are people training those things then? It’s simple. I’ll take Krav Maga as an example because Krav Maga has the best marketing for Self Defense. Krav Maga has some really nice videos on unresisting opponents and it all looks nice in videos. That’s something that attracts people.

Everything in Krav Maga looks nice on videos. You can defend yourself from Guns, Machine Guns and you can groin kick a tank if necessary. So, people without any fighting experience are trying to find some shortcuts to be safe and they want to feel like fighters although they’re not.

People want to be happy and if you tell them that they will be strong and safe and also be able to crush anyone it’s easy to get their money as they will be happy with their false sense of security. And that’s exactly what Krav Maga and similar martial arts will do.

People have to understand that there are no shortcuts to be a fighter without putting a lot of sweat and suffering into their training.

Also, when we’re talking about Krav Maga there were no Krav Maga practitioners in the first UFC’s. People will say it’s because of rules, but as I said earlier groin Kicks were allowed back then.

The real reason is that even Krav Maga instructors know where they stand in a real fighting story. They know where their place is and what’s inside their follower’s pockets. Maybe this sounds bad, but that’s what I think.

If you want to be a fighter training real martial art. Martial arts that you will spar with resisting opponents. Just don’t think you’re something that you really aren’t.

What about multiple attackers? That’s the question people raise when you mention BJJ as a Self Defense martial art.

The odds of getting into a street fight are very low and the odds of being attacked by several people are very, very low.

Are you really able to beat more guys with any martial art?

There is a possibility that one guy beat up 5 guys and that happened already and it’s usually one very tough and trained guy against 5 drunk guys, untrained and clumsy.

The fact is you don’t have to train Muay Thai before Jiu-Jitsu because of that low percentage of multiple attackers situations where you also have minimal chances of winning.

Come to any gym with your martial art and challenge 2,3,4,5 guys to fight you and very fast you’ll understand how helpless you are against multiple attackers.

You guessed right, that’s BJJ and that’s proved in the first UFC’s.

Anyone who watched it saw the power of BJJ there. They could see strong evidence that Jiu-Jitsu is in the terms of pure martial is simply the best.

If you’re worried about multiple attackers then you should carry a knife, gun, or pepper spray with you as it’s your only chance.

Of course, if you’re that worried about multiple attackers you should train in some striking martial art like Muay Thai or Kickboxing, but there is no martial art that can assure you that you’ll beat 5 guys, period.

Conclusion on the best martial art for self-defense

If you look a bit deeper into this “problem” of which martial art is the best for self-defense and if we take into consideration what Royce Gracie proved in early UFC’s as we could see all kinds of martial arts versus Brazilian Jiu-Jitsu you can ask yourself one simple question.

How can you expect to beat multiple attackers if you can’t beat one Jiu-Jitsu practitioner?

So, the conclusion to this topic and on the question, what martial art is the best for self-defense and the street, I would say it’s Brazilian Jiu-Jitsu.

I didn’t mention guys like Mikhail Ryabko or those similar to him or all other “martial artists” using chi energy and stupidities like that because I think they should be banned from Martial Arts forever.