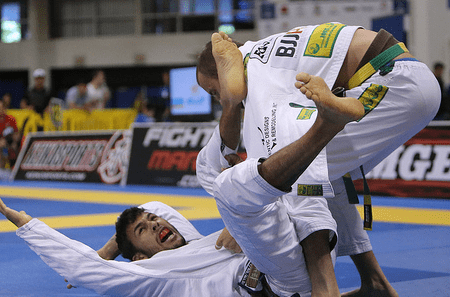 It is no secret that Brazilian Jiu-Jitsu has some controversial techniques, made even more notorious than they should be by even more controversial rules. Among the rules, some make sense, some not so much. In terms of the moves, some are really dangerous and probably have no place in sport BJJ, while others just have a bad name due to a string of circumstances. In any case, Brazilian Jiu-Jitsu is more than a sport, which means some people might need to use the skills in situations where a rulebook doesn’t apply as much, be it self-defense or MMA, Jiu-Jitsu, in my opinion, should prepare people for everything. One such thing that we have to consider at least covering in classes is the slam in BJJ.

A slam in BJJ is not unheard of, though they are extremely rare. Three’s a good reason for that – they can really end up injuring someone. When we are rolling, or even competing, there’s no point to causing devastating and potentially life-risking injuries. It is a sport, after all. However, Jiu-Jitsu does place us in positions where we might be open to being on the receiving end of a body slam. That is no fun at all, and it is even worse if it is done outside the bounds of a sport. To that extent, knowing what the slam is, how it works, and how to prevent it is key to staying safe and keeping others safe.

The body slam in BJJ is completely and utterly forbidden. However, we’ve seen plenty of instances of it in MMA, and even some in WWE, as unbelievable as it may sound. The former was the real deal, with Quinton Rampage Jackson’s body slam knockout of Ricardo Arona in Pride topping the list. WWE style powerbombs or Batista bombs were the signature of Dave Bautista but were no less dangerous than their MMA counterparts.

The slam is a simple move – you pick up a person that’s on the ground, lift them in the air, and slam them back on the ground, mostly with their backs being the surface that hits first. In some instances, slams might end up with the person that’s receiving them on their head, which is obviously a potentially deadly situation. The move is obviously dangerous, but we have to consider it as grapplers. Why? Well, because we are very open to it on many occasions.

Many of the guards we play have the potential of subsequently leading into slams. In Sports BJJ, with slams being outlawed, this is no problem at all. However, people do instinctively get the urge to lift you off the ground (if they can) when in a triangle, or an armbar, or any other similar situation. Conversely, slamming you back down also seems like a good idea, instinctively speaking. How many times have you had to warn a new student who is either really strong or perhaps has a grappling background to refrain themselves from slamming folks? Of course, they don’t know it is illegal, but that is the problem – neither will someone in a self-defense scenario. In an MMA fight, on the other hand, slams are legal, giving us even more reason to introduce them to our curriculums, even if it is only from a defensive standpoint.

Can You Slam In BJJ?

The slam in BJJ is rare, but when it does occur, it earns an instant DQ. However, there are loopholes just like with everything else, which makes learning the slam in BJJ an even more important task. Even if you’re the most well-intentioned person ever, and would never consider even slightly slamming someone to the ground, you might just end up slipping or making a mistake from a position that results in a slam. Even more importantly, people might not be as well-intentioned as you, not holding back on doing barely legal moves that have slam components in them.

The illegal version of a slam, according to the IBJJF rulebook, which is pretty much the gold standard nowadays, a slam is any motion where you pick someone up, whether it is from the guard or during a takedown, and suspend them in mid-air for a short while, before sending them down to the ground.  Picking up an opponent who has you in a triangle is probably the most obvious example of an illegal slam that will get you immediately DQed. Another example is back control, where jumping violently backward is also considered a slam. As per the IBJJF, the height does not matter, as you might be DQed even for lifting someone a couple of inches of the ground, pausing, and then send them crashing down.

However, others are also legal versions of the slam that can still end up being dangerous and painful for the recipient. One legal way is to gently place an opponent to the ground. This would not constitute a slam in BJJ, even if you first raise them several feet off the ground. That, though is the safe version. Given that slams are not strictly defined, there are takedowns that mimic slams but are legal simply because they’re done in continuous motion. One such example would be a power double where you lift the opponent on top of your shoulders and spin them before crushing them to the ground while you’re running forward.

The easiest defense to a slam in BJJ is to let go of the guard/triangle/back/ whatever position you are in, and stand. Even if it is in a sport setting where people will get DQed for doing it, it is not worth the risk. Moreover, you don’t have to completely abandon the ship.

One great way of deterring slams from the guard or even a triangle choke is to aim to remain in a guard (of sorts) while beginning completely safe. The mermaid sweep is the answer, with your goal being to lock a closed guard around the knees of an opponent. There’s no way anyone is slamming you from there, and you can perform one of the best, and most ego-bruising sweep in Jiu-Jitsu. Also, an option is to look to hook one leg, especially from the back, which will either get you a standing body lock that you can use to get back to back control or perhaps a leg lock entry.

Further options to counter a slam in BJJ include working against the opponent’s posture. With there’s you might risk an eventual slam, but you always have the option of letting go and transitioning to standing. The idea is to move backward so that you cause your opponent to lean into you. The more they lean forward, the less they’ll be able to pick you up. This is actually a great strategy for finishing triangle chokes, or even setting up closed guard armbars.

The slam in BJJ is dangerous, risky, and definitely not a move that should be legal. Coming from someone who likes the painful side of grappling, that’s saying something. Still, just like with everything else, ranging from heel hooks to neck cranks, I believe we should learn about the potential danger s of these moves, and be able to understand them so we can defend them. Getting slammed in a tournament, even if it DQs and opponent, might leave you with lasting injuries and that is just not worth it. Know the dangers of everything that grappling can throw at you so that you can choose which moves to avoid yourself.

The Dragon Sleeper Hold – A WWE Move That Works?

Getting Tired During BJJ? Here’s What You’re Doing Wrong

How Many Brazilian Jiu-Jitsu Techniques Do You Really Need?