It is a funny time to be involved in martial arts. We’ve been locked down for more than a couple of months now, with no training, no competing, and only BJJ DVDs to keep us company. Luckily, things seem to be improving, or our impatience is getting the better of us. Whichever the case, martial arts competitions are coming back to life. Some, like Submission Underground, or the UFC, never really went away. Others, like Fihgt2Win, are slowly restarting under different formats (at least when it comes to hygiene and safety). In the midst of it all, we saw crazy upsets, some broken bones, and moves that are not supposed to actually work. We saw an actual dragon sleeper hold performed live and ending with a tap.

There are certain moves that we see in pro-wrestling that are supposed to be nothing more than fight choreography. Well, maybe Steven Seagal would be able to pull them off, or tech them to Anderson Silva, but nobody else. Some of these moves are completely out of order and have no chance of ever working. But every now and then, an innovative fighter or grappler comes by, throwing caution to the wind and giving a nutty move a try. We’ve seen it with the Boston Crab before. Well, we can now add the dragon sleeper hold to that list. Brace yourselves for some nasty neck cranking once we’re back on the mats!

The thing with pro-wrestling is that it is fake. Right? Come on, we all know those guys and girls don’t really fight each other. Remember when Brock Lesnar came back from his UFC stint and took things a bit too realistically, breaking his WWE “opponent’s” arm with a Kimura? Well, as it turns out, it’s not just legit moves that work in pro-wrestling, but also the other way around. Although extremely rarely.

Actually, when I come to think about it, stuff like the figure four leg lock and the Texas Cloverleaf are now staples of BJ (albeit modified) despite once being seen as nothing but pro-wrestling moves “for the show”. So, there’s the odd move or two that really do end up having an application. The Dragon Sleeper Hold is just the last one in a line of moves people have decided to use, pull off and now have bragging rights about. In all fairness, though, it does have its roots in actual catch wrestling.

That said, to be honest, pro-wrestlers really do undergo hard preparations. Despite all matches being nothing more than choreography, it still takes knowledge to pull things off. In fact, some of them are also ex-wrestlers, and good ones at that. Moreover, some of the moves they drill and perform end up looking so cool or even effective that BJJ folks or MMA fighters sometimes pick them up. The rest is history…

What Is The Dragon Sleeper Hold?

So, what exactly is this Dragon Sleeper Hold? IN short, I guess you could call it a reverse guillotine neck crank, but that’s putting it bluntly. A notion of caution before we go into it, though. This move is potentially debilitating and not one you should try unsupervised. Also, consider this to be the definition of illegal moves when it comes to IBJJF Gi BJJ rules. That said, a legit submission is a legit submission, and, I foresee quite a few attempts at the Dragon Sleeper Hold in the near future.

The Dragon Sleeper Hold works from the back. But it works like a north-south choke / gu8illotine choke from the back. That right there should be the first thing scaring you into being careful with this one. Now, there is a more “PG” version, where you can set the move up from North-south. When first attempting and learning it, I’d suggest doing it from there. What you want it to set up for a North-South choke – the configuration of your arms is identical. However, instead of trying to find the sweet spot and strangle, you want to make life miserable for your opponent.

The first step is to sit down, while still holding on tightly to the neck. Once you achieve that, you slowly and methodically transition to the back of the opponent. Only after you’ve established bot hooks will you think about finishing the move (if they don’t tap form discomfort up until then). How to finish? Imagine you’re in full guard and you’re trying to do a Guillotine choke. Just don’t snap backward too fast!

Of course, you could make the setup much easier by simply getting the submission directly from back control.

The reason I’m talking about the Dragon Sleeper hold now, is that a grappler named Michael Salazar, a BJJ brown belt pulled off what might be the most brutal submission in Fight2Win history. He managed to get a modified Dragon Sleeper hold, something known as the “Executioner”  in 10th Planet on his opponent Tony Oviedo. He set the move up after passing the guard with a leg drag, but finished with just one hook, as he had it sunk in really deep.

There are also several instances in MMA where people have pulled off the Dragon Sleeper hold. On instance is from china, where a fighter pulled off a picture-perfect Dragon Sleeper. There’s another one as well, where you can actually see how dangerous the move is, from the reaction of both the referee and the fighter that tapped out as a result of the submission. While we still haven’t seen it at the biggest stages the likes of UFC, ONE FC, and Bellator, the move is certainly to wiggle its way there soon.

Pulling off Berimbolos, flying armbars, and the likes is cool. But, have you ever pulled off a Boston Crab or a Dragon Sleeper Hold? DO it safely, and it will become the stuff of legends, particularly if you can do it in an actual match.  Guess some pro-wrestling submissions do deserve more credit than we give them. 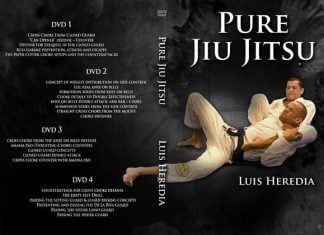 0
If you know what an Amassa Pao is than this article might not be for you. What is definitely for you though is the...