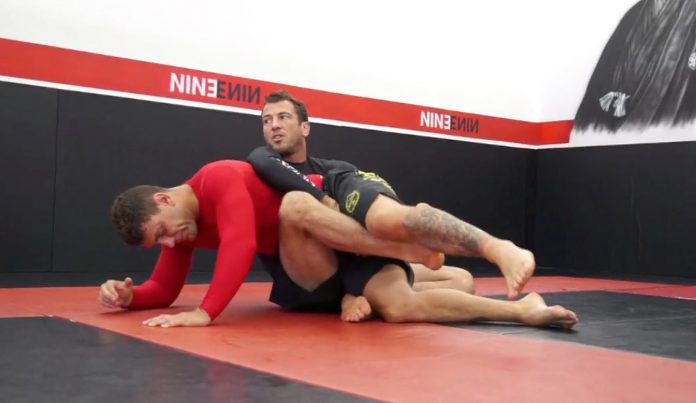 If there’s one area of BJJ where innovation never stops, it is the guard. There are literally hundreds of guard variation in BJJ that we know of at present. The variations that people across the world use and still haven’t presented to the world must be at least as much as those we know. That means that if you’re stuck with a particular guard variation, there are plenty of options for you to break through your plateau. Out of those, some include really effective closed guard variations. And, just to prove that not everything effective has to be new, we bring you an old but proven closed guard variation – the Octopus guard.

The octopus guard is the brainchild of a veteran grappler by the name of Eduardo Telles. At first glance, it probably seems like this guard is only going to get you in trouble. As such, it is probably not a great idea for beginners to dabble with it. Well, at least not until they master some closed guard fundamentals first. The Octopus guard definitely offers something new, but it takes a bit of getting used to. That said, once you get used to it, you can be sure that your guard game is going to become the stuff of nightmares for any opponent, regardless of weight and size.

On the subject of innovative guards, be sure to check out the best explanation of the rubber guard there is. Brandon McCaghren, a 10th Planet black belt leaves no rubber guard stone unturned in his breakthrough “Rubber Guard: The Meathook” DVD set. From philosophy to setups and crazy submissions, Brandon goes over every bit of the rubber guard to give you a real edge over your opponents!

World champion Eduardo Telles is a Fabio Gurgel black belt, famous for his “weird” approach to Jiu-Jitsu. If there’s one signature move Telles is known for it is successfully fighting out of the turtle position. However, hi did not do it defensively, but chose to be there and attack from it. This is a strategy that no other grappler has used since, at least no effectively. It was this kind of efforts that gave birth to what later became known as the Eduardo Telles.

The training a partner of an in-form Terrere, Eduardo Telles had a lot of guidance and support in his Jiu-Jitsu experiments. Furthermore, he had high-level partners to try his innovation on. The Octopus guard is precisely the type of position you would expect from an unorthodox grappler like Telles. Essentially, the Octopus guard is a position right in the middle between the closed guard and a back take.

Imagine that you’ve managed to get one of your opponent’s arms across your center line from the closed guard. You might choose the arm drag, 2 on 1 or whatever method you want. The goal is to get the opponent’s both arms to the mats on one side of your torso. Once there, the logical step would be going for the back. However, instead, of doing that, you’ll simply crunch up and place your near side arm over the opponent’s back. The hips need to be as close to their hips as possible.

As you can see from the guard itself, the octopus guard is a very potent attacking position. It is really really simple, yet not suited for beginners. The reason for this is that you need a certain amount of guard awareness to be able to get into and maintain the guard. However, once you’re down with that, attacking becomes a breeze, especially sweeping.

That said, the most important part of the Octopus guard is actually entering into the position. One great way of entering into the Octopus guard is by getting a 2 on 1 grip from the closed guard. Try to push the writ towards the opponent’s belly, while looking to pull their elbow towards you. This makes the position extremely difficult to escape, it also opens up a clear path to their back. A simple switch of the elbow to the opposite side of your center line and crunch up and you’re in the octopus guard.

Another great way to get the position is through a Kimura. When you go for a Kimura from the closed guard, the only option your opponent has is to bend the elbow towards their body. Whenever they do this, you’ll want to transfer their forearm over and behind your head. Swim your other arm through and you’ll be ready to play the octopus guard right away.

Once you have the octopus guard, attacks are going to come instinctively to you. Still, the best option to go for sweeps. the position makes sweeping a real breeze, as you already have your opponent’s posture. In order to take away their base, the simplest thing to do is go for a sit-up sweep. Unlike a regular sit-up sweep, though, you have a much better position here. All you want to do is grip firmly over and on the other side of the opponent’s torso, and lift your hips, pushing to that same side. You’ll finish in the mount, ready to go for attacks immediately.

Another option to sweep is choosing the opposite direction. If an opponent manages to post an arm to prevent the sit-up sweep, you can switch directions with ease. Simply do a hip escape to open up your hips towards the other side. From there you’ll go for the same motion as before. Lift your hips, and topple the opponent over the shin of your far side leg. Once again, a great mount position to work from.

As far as going into a better position than the octopus guard, you have just about every option open. For now, we’ll focus on two that are truly readily available. the first one is the most obvious one – the back mount. When you’re in the octopus guard, you’re more than halfway to the back. All you need is a simple modification. Now, while going up is a viable thing to do, it’s better to stay on the ground. Simply use your far side leg to help you hip escape, while you use your opposite side arm to establish control over the shoulders. the opponent’s hips are going to “fall” into your hooks, and the seatbelt is just a move away.

Going in a more unorthodox direction, you can always hunt for a truck entry from the octopus guard. there’s even side control along the way. First, use a sweep to get on top, but make sure you go into twister side control instead of mount. This gives you access to their top leg, which means you can twister roll straight to the truck. Anything, from crotch rippers to the twister is available from there. Oh, and another backtake, of course.

Finally, the best way to attack from any position in grappling – submissions. As far as those go, there are plenty of opportunities form the octopus guard. One very clear option is a Kimura. The most common reaction you’re going to face from an opponent is the attempt to get an arm back in and across your body. In certain cases, you won’t be able to prevent it. While this move effectively gets you out of the octopus guard, it lands you in a kimura position straight away. It is as easy as getting the figure four grip in and falling to your back. From there, the most basic kimura setup applies. Or, you can use the kimura to re-enter into the guard.

A very cool way to finish a match is hitting a calf slicer straight from the octopus guard. You’ll need to work a bit and transition into an octopus half guard, though. To do that, simply place one of your legs in between the opponent’s legs. Look to place the foot of that leg outside and ram your shin as close as you can into the back of their knee. Now, go to your back and lock your legs ina triangle, use both your arms to pull on.

The Basic Principles Of Attacking From The X-Guard

The Carnivore Diet For BJJ – Is It A Bad Idea?