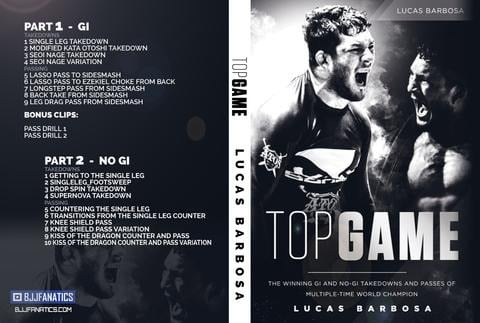 Hulk Smash!!! If I had to bet, I’d say that nobody would like to go up against the Hulk in a BJJ match. On the other hand, who wouldn’t enjoy learning how to smash people from the Hulk himself? Well, not the green color barely comprehensible Marvel Hulk. I’m talking about BJJ’s very own Hulk, who just as scary as his green counterpart. Lucas Barbosa has certainly derived his scary nickname. There’s hardly anyone in grappling martial arts that scarier to be up against. Especially if you’re on the bottom. Conversely, the first Lucas Barbosa DVD is more than appropriately named “Top Game”. And we got it first to review it for you!

Let’s put things into perspective for those that might not be too clear on who Lucas Barbosa is. If you’re expecting the BJJ Hulk to be an ultra-heavyweight, you’re in for a surprise. Barbosa is a medium-heavyweight and, arguably, the top one as well. Regardless of that, he can take down and dominate even the heaviest of grapplers. The versatility of Lucas Barbosa’s top game is evident in both gi and No-Gi, which makes him a truly difficult opponent to face. Or, a very experienced and versatile teacher to be learning from. I know that I’d choose the latter, at least for now. So, I choose the Lucas Barbosa DVD to start with.

Lucas is a Brazilian Jiu-Jitsu black belt under Andre Fabiano. Fabiano himself is of the Reylson Gracie lineage, so it’s not hard to see why Barbosa has such an aggressive grappling style. Barbosa is one of the new breeds of BJJ black belts that are completely impossible to compete against.

The Brazilian started training in the Gentle Art in his native Boa Vista in Brazil. Involved in a multitude of sports since a very young age, Barbosa did everything, from basketball to swimming. At 15, he discovered grappling and fell victim to the addiction that is BJJ. His first teacher was Diego Lopes, and he switched coaches a lot until the purple belt. That is when the Hulk decided to move to Rio and become a professional full-time grappler, joining Marcio Rodrigues’ team. After he got his brown belt his career truly blossomed.

Hulk got his breakthrough in an unusual way for a grappler. Namely, he was part of a Copa Podio series, titled “The team”.  The goal of the series was to find a top-level challenger for a key event. Lucas’ performance was top notch and brought him to the pay-per-view event. From there on, he became a synonym for top game pressure.

Barbosa earned the nickname “Hulk”  when he moved to Rio. He had immense physical strength and knew how to use it to maximize his effectiveness with throws and pressure passing. In short, he smashed people in the gym, not unlike the Hulk on the TV screens. Now, all his knowledge can be found on the “Top Game” Lucas Barbosa DVD. For the physical side of things, you’ll need to hit the gym. A lot.

To be honest, this Lucas Barbosa DVD set is unlike any other I currently own. And my collection is not a small one. The Hulk managed to release a true masterpiece, both in terms of quality of material and organization. You won’t get a comprehensive system that covers all bases, or just some random collection of techniques. You’ll get the only few tools you need to achieve two objectives – take the fight to the ground and dominate with a brutal submission-oriented top game.

The key moment to note about this DVD is that it is split into two main parts. There’s a DVD for each of them. Both go over the same subject but do so in a very different fashion. The first DVD is all about Gi Jiu-Jitsu. In particular, the top game of Gi BJJ. The second one goes over the same subjects, only this time without the Gi. Conversely, the techniques vary and are not the same as those in the Gi. In both instances, he uses simple techniques that work for everyone. There are details inside to please both beginners and experienced grapplers alike.

Furthermore, each DVD is organized in a very precise and specific fashion. First up, there are takedowns that demonstrate how to get the fight to the mat. After a few options from the feet, Lucas turns to the top game essentials that will get you a pass and a submission.

The first installment of the Lucas Barbosa DVD kicks things off with the Gi. The first thing Lucas goes over is the single leg. he offers a great set-up for entering into the takedown. it is by far the best way to get a single leg I’ve seen so far. Moreover, he pays special attention to his signature throw – the Seio Nage. he offers two great variations of the move, to keep your opponents guessing at all times.

After getting to the ground, it’s time for Hulk to truly smash. Barbosa goes over a few passes and a very cool Ezekiel choke variation. The best thing about this instructional is that Lucas, in true Hulk style, likes to start attacking from the so-called sides mash position. The passes he covers are the long step, leg drag and a couple of variations on the lasso pass. These last options are going to be useful to everyone that gets stuck in lapel guards. Even better, one of the lasso guard variations ends in the aforementioned Ezekiel choke.

This Lucas Barbosa DVD finishes with a couple of bonus moves. There are two drills that are going to take your pressure passing to the very next level. All you have to do is get the Top Game Lucas Barbosa DVD, learn the drills and put the repetitions in.

In the second DVD, Lucas is all about the No-Gi game. For all you No-gi only grapplers out there, this is a real must-have. Worried about leg locks while you’re passing? Time to forget all about those worries.

Once again, Lucas goes over the essential takedowns that are going to get you to the top game. Again, the single-leg is in the focus at the beginning with a very cool footsweep variation to help you finish against someone who defends well. There’s also a takedown Lucas calls the supernova takedown. As far as ways to smash someone to the ground go, this is definitely on the top!

The No-Gi top game starts off wit ha takedown counter. Interestingly, Hulk demonstrates how to counter the single-leg takedown, and offers multiple transition options. The use of the guard that annoys everyone in no-Gi, the half guard knee shield, will definitely decline after this DVD. Hulks’ ways of passing are simply unstoppable and render the knee shield completely useless. While this DVD has no bonus mover, it contains two crucial techniques at the very end. Barbosa shows counters to the kiss of the dragon transition, along with some brutal passes.

Barbosa’s DVD and Digital Instructional is really a masterpiece. The only thing that’s missing is more techniques but I guess that’s the reason why the price is also lower than usual. So, should you buy this Barbosa’s DVD or not? If you’re looking for top game instructional I would say YES, and that’s a big YES. First because of the lower price and second because Barbosa showed stuff that really works. No fooling around and no some “magic” techniques.