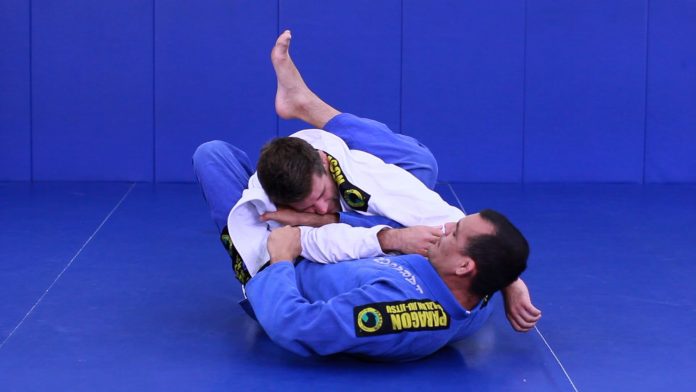 This one is for all the old-school BJJ fans. Instead of complicating things with fancy moves, this one is for those that like it simple, clean, and fast. We’re going to go over submissions from the guard that is simple, effective, and work together flawlessly. There’s a certain beauty in the simple submissions of BJJ that everyone knows. Catching an opponent with a cross-collar choke is more rewarding than hitting a flying Gogoplata. The reason is that people know the submission, can recognize it, and know-how to defend it. Pulling it off against all those odds means you’re one really scary grappling MF. And having two more submissions from the guard for the odd occasion when the first one doesn’t work is going to make you world-class off your back.

Our task for today is easy. Outline the basic idea of submissions from the guard. Then, go over the three absolutely best submissions you can get from the position. Finally, connect them all through simple manipulation of grips and hip movement. Suddenly, you’ll have a submission system as elaborate as any of the modern ones. Yet this one is going to be rooted in the very basic building blocks of Jiu-Jitsu. Why spend countless hours looking for brand new closed guard techniques, when you can get better by polishing what you already know.

Get inside knowledge on the closed guard like nothing you’ve ever experienced before! Bernardo Faria’s “The Closed Guard” DVD is an unbelievable resource for all things related to the full guard in Jiu-Jitsu. While the holy trinity of guard submission is enough, there’s so much more to learn, and it’s all available at a cut-price!

There are a few basic principles of submitting from the closed guard that you have to understand. Most closed guard submissions work as a result of certain mechanical advantages the position provides. however, simply being in closed guard does not guarantee you attacking opportunities. You’ll need to become active and use your hips and grips in a smart way, to get submissions from the guard without much effort.

The first thing to look for from the guard is grips. But which grips and why do you need them? Not for simply hanging on to your opponent for dear life, of course. Grip fighting is very strategic and has to be extremely precise. For now, remember that our system is based on collar and sleeve control. We’ll elaborate more on that later on.

Next up, posture. The primary task of grips is to help you break your opponent’s posture down. Attacking submissions on somebody with good posture spells nothing but trouble for you. Also, remember that once you break someone’s posture down from full guard, you need to keep them there.

Finally, remember that the mechanics of the closed guard means your hips are extremely close to your opponent’s. This heavily restricts your movement opportunities without sacrificing control. Since you need your hips in order to re-position yourself for almost all submissions for the guard, you’ll need to move them slightly and strategically. Another reason why you need to have the opponent’s posture broken.

A true classic of BJJ. The cross-collar choke is one of the first submissions from guard students to learn. It is, despite this, one that they only understand after a couple of years, on average. There’s something about hand positioning and the choking area of the wrist that people just can’t get right straight from the get-go. Still, the cross-collar choke is the best option to go for, against an opponent without posture in the closed guard (with a Gi, of course).

The cross collar choke works by constricting the arteries on both sides of the neck (a blood choke). The hand placement is deep with four fingers of each arm inside the collars. Each hand goes in the opposite side collar, crossing the arms in a scissor-like fashion. So far, most people get it right as there’s not really much to it.

This is the best hint I can offer on mastering this choke right away – pull your elbows together. The positioning of the arms intuitively leads people to flare their elbows thinking they’re tightening the choke. This actually loosens up the choke. Finishing requires you to put your elbows tight together and flex your arms, like for a biceps curl. Furthermore, the side of your arm, right below the wrist on the side where the thumbs are is the choking portion.

There’s not much to say about an armbar from the bottom. As far as submissions from guard go, this one is probably the one people go for most often. As with the collar choke, there’s complexity in its simplicity, with the key details often overseen.

In order to get the armbar, you need one arm of the opponent as far across your body as possible. This is where the sleeve grip plays a huge role. Once you have an arm isolated, you’ve taken care of posture as well. TO get to the submission, you’ll need to open the guard and work methodically to re-adjust your hips. First, one leg (on the side of the trapped arm) goes on their hips. This is a pivot point that will allow you to turn your hips in the same direction. The other leg has a crucial role to play at this point. It needs to come down hard on the opponent’s upper back, making sure the posture stays broken.

Finishing is as easy as swinging the other leg over their head and bridging up with the hips. Of course, all other armbar details apply – knees together, legs flexed and arm held tight across your chest.

Another BJJ classic. The triangle is a very powerful submission that is arguably the closed guard’s best weapon. For a triangle choke, you need both your legs around the opponent’s neck, along with one of their arms. Trapping the arm is essential, as it is the opponent’s shoulder that provides choking pressure on one side.

Once again you need grips and a broken posture. The basic idea is to swing one leg on the shoulder of your opponent. Once you have it, remember to re-guard right there and then. you’ll end up in the “diamond’ position, like a guard with one leg over the shoulder and one leg under the other arm of an opponent. This is where details come into play.

The first crucial mistake with triangles is the angle. From the diamond, you need to turn yourself as much as you can towards the knee of your own leg. Only then can you think about closing the triangle and finishing. The second mistake is the finish itself. Instead of thinking about pushing down with your legs from a closed triangle, think about squeezing your thighs instead. A pull on the head is all that it takes to get a tap.

\Now, let’s see how this holy trinity actually works together. Remember when I said grips are crucial? Smart grips are going to allow you to both get the opponent’s posture and set up any or all of the three best submissions from the guard. As you get a collar and sleeve grip, remember that you need cross grips. This means your right hand in the opponent’s right collar and left hand on their left sleeve.

Once you have the grips, pull with both, the goal is to get the opponent as close to you as humanly possible. At the same time, the aim of the sleeve grip is to drag their arm across your chest and past your shoulder. This is the “position zero’ for attacking submissions from the guard.

The cross collar choke is right there, you only need to let go of the sleeve grip and sneak your second arm in the collar. In case this fails you can always re-grip the sleeve and re-extend the arm. From there, getting an armbar is only a hip escape away. And, in the unlikely occasion that your opponent pull their elbow out, you’re all set for a triangle choke. Remember to never let go of the collar grip, no matter which submission you’re going for. The beauty is that even if you can’t get a triangle, you can switch back to the cross-collar choke and go again!

DVD and DIGITAL Instructionals Related to Submissions From Guard :

Inverted Guard – Is It Really Worth The Trouble ?

The Basics Of The Sneaky BJJ Rat Guard System