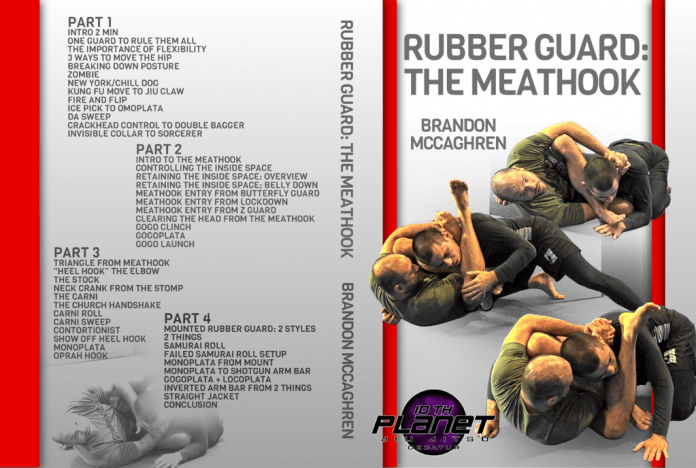 Every time someone mentions 10th Planet Jiu-Jitsu people picture Eddie Bravo straight away. The enigmatic founder of the franchise is an unforgettable character, that’s for sure, but he’s not the only one. The 10th Planet community features a lot of very talented high-level grapplers. One great example everyone has heard of is Geo Martinez, and Ebi champion and ADCC veteran. Another name you might not know so much is Brandon McCaghren. Although not in the spotlight, he is probably the best teacher inside the system. So, when he comes out with an instructional, you should buy it immediately. And with a catchy title like Rubber Guard: The Meathook DVD, you better hurry up!

Simply put Brandon’s Rubber guard: The Meathook DVD is as comprehensive a guide to 10th PLanet’s signature guard system as you can get. So far, Eddie Bravo has a few instructionals that address the position, but nothing recent. Given the constant evolution of the position, thanks to the input of the many black belts Eddie now has, the rubber guard has come a long way since then. Brandon McCaghren is by far the utmost authority on anything 10th PLanet (perhaps second to Bravo only). He has immense knowledge of Jiu-Jitsu and has a great knack for teaching.

As far as the legitimacy of the position goes, the rubber guard works. 10th planet members have been super successful in grappling, combat Jiu-Jitsu, and even MMA. The rubber guard is a very elaborate system that might seem like more fuss than it’s worth. Once you give it a try, though, you’ll never look into other closed guard variations. It’s that good and that effective. And, to dispell the most common myth straight away, freakish flexibility is not a pre-requirement. Yeah, you read that right, even the stiffest of grapplers can be effective from the rubber guard. How? Brandon McCaghren has the answers.

Contents hide
A Look At Brandon McCaghren
Rubber Guard: The Meathook DVD Content
The Basics
Introducing The Meathook
The Stock, The Carni, And Other Wicked Stuff
Deep Into The Rubber Guard

A Look At Brandon McCaghren

Since most of you probably never came across Brandon McCaghren until now, let’s shed some light on this mysterious grappling genius. As far as BJJ nerds go, Brandon is right up there with the best of them. He is completely obsessed with Gentle Art. Although faithful to the 10th Planet system he is a huge part of, Brandon tends to have a deeper teaching style. In that sense, he is more alike Firas Zahabi and John Danaher than the free-flowing artistic Eddie Bravo. It is a very nice contrast to the usual way of 10th Planet instructions, which makes him the premier coach to demonstrate the system.

Brandon became a black belt under Eddie Bravo in 2016. An impressive fact about Brandon is that when he began training, he didn’t really have a coach or resources at his disposal. It’s hard to imagine a world without video instructionals today, but that’s exactly how Brandon started. Since Eddie Bravo was not near him, he had to learn by trial and error. As painstakingly slow as this process is, it’s is effective nonetheless. Ultimately Brandon turned into the most detail-savvy grappler out there, and a great teacher.

One more thing to note is the time and effort Brandon McCaghren puts into being a better teacher. he is constantly discovering new and improved ways of teaching and communicating with his students. This is apparent throughout the Rubber Guard: The Meathook DVD, which is his first digital release. Hopefully, there will be plenty more to follow.

Before we get into the content of this great new release let’s do a rubber guard crash course really fast. The rubber guard is basically a closed guard variation in which your legs and arms connect behind the back of your opponent in specific ways. This allows you for constant control of their posture as well as plenty of attacking opportunities. the system is very elaborate and has lots of small maneuvers and positions within it. All of these are originally named by Bravo, who likes to put funky names on every step of a technique.

One such crucial component of the rubber guard is the meathook. It is a painful way of improving your control over an opponent while creating a great opening.  Why would you focus so much on just one same adjustment within the guard? Read along, or better yet, get the DVD and everything is going to become crystal clear!

Since the inner workings of the rubber guard are not commonly known among grapplers, Brandon takes it from the very top. Rubber Guard: The Meathook DVD number 1 is all about rubber guard essentials. It all starts with some flexibility advice as well as crucial points on hip placement. It turns out the angle of your hips is much more important for rubber guard than flexibility.

From there on it’s all tuber guard classics, with a modern twist. All of the basic positional checkpoints, like Zombie, NY, Chill Dog, Ju Claw and the rest are there, explained in great detail. Before the DVD concludes, Brandon goes over the easiest submission to get from the rubber guard – the Omoplata. At the very end, there are a few essential modern rubber guard concepts like the sorcerer and invisible collar to tease you over what’s coming next.

Finally, meathook. What is this meathook we can’t seem to stop talking about? Well, let’s put it this way. If you stick the meathook when in rubber guard you can do whatever you want to your opponent. Just like a meathook in a carcass.

Basically, what Eddie Bravo calls the meathook is armpit control with the palm. You can achieve this by putting a hook grip into an opponent’s armpit, over their shoulder. However, the manner in which you get it (from the rubber guard) involves much more tangles and positioning. Fear not, Brandon dumbs down everything to the bones, so much so that even I got it from the first attempt.

In terms of the meathook though, Brandon expands the concept to other positions as well. Butterfly guard, Z-guard and lockdown entries might turn out to be a better fit for certain grapplers. The final touch in this second DVD is the few Gogoplata setups that round it off.

The Stock, The Carni, And Other Wicked Stuff

This is where things turn, err, strange. The third volume goes deep into 10th Planet territory both in terms of techniques and nomenclature. For your everyday Gi student, a glance at the content of this DVD is going to be as foreign as looking at a Tai Chi release. Once again, Brandon is there to make things painfully simple.

There’s no way around the 10th PLanet terminology but there is a system to help you understand it. From the Stock, via the Churchill handshake all the way to the Carni, you’ll learn moves that are as effective as their names are fun. There’s no way of explaining them here that’s going to do them justice so just pick up the DVD and learn from Brandon himself. Al I’m going to say is that if you’re looking to turn an opponent into a pretzel, you need to learn the Carni.

Deep Into The Rubber Guard

Finally, McCaghren goes over all the possible directions in which the rubber guard game can expand. One great example is the mounted rubber guard. Sweeping from the rubber guard is simple if you follow all the rules. What’s really cool about it is ending up in mount while still having the rubber guard on. I doubt many opponents are going to be able to get away from there.

Some very cool finishes follow the basics of the mounted rubber guard. The Monoplata is one such submission that ties in the rubber guard with other submissions perfectly. Once you have it the door is open to inverted armbars, Locoplatas, the straight jacket and everything else you might think of. Oh and the best thing? Even if you get reversed, you just end up in a rubber guard again. There’s no way out once you master the Rubber Guard: The Meathook DVD.