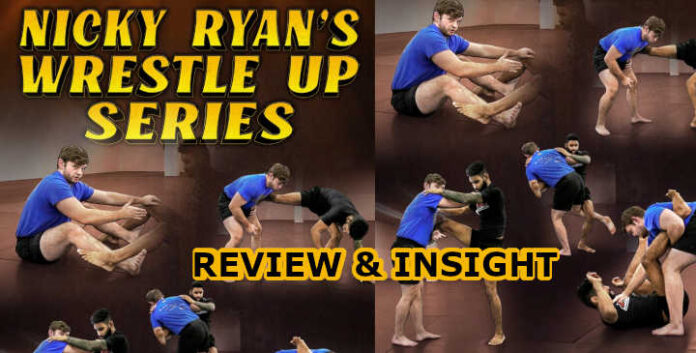 Are you ready for the first-ever Nicky Ryan BJJ DVD? Well, ready or not, “Nicky Ryan’s Wrestle Up Series” is here, and we got to go over it with a fine-tooth comb. For those wondering what exactly happens in this instructional the answer is an interesting alternative take on sweeps for BJJ. Read on.

Despite what the headline might suggest, this instructional has little to do with wrestling as it is commonly perceived by people. Wrestling for BJJ extends far past just takedowns and this Nicky Ryan DVD is the perfect example. The subject matter in this instructional is how to sweep people from seated and supine guard positions. As expected, Nicky has a different approach to sweeps to the pone commonly used in BJJ. Just like everything else the now-defunct DDS guys do.

Nicky Ryan uses a lot of wrestling in his grappling game, mostly in the form of headlocks, arm drags, crescent steps, etc. Now, he demonstrates how to mix it all up with the task of wrestling up from bottom positions in BJJ. It is a really smooth combo of wrestling with BJJ that offers all of the benefits with none of the drawbacks.

Nicky Ryan is a name that is pretty well known in grappling circles. OF course, he is mostly known as Gordon Ryan’s younger brother and one of the youngest members of the Danaher Death Squad. Nicky is now one of the founders of the B-team along with fellow BJJ celebrity Craig Jones. GOes without saying that Nicky Ryan is a John Danaher black belt.

Nicky started training along with his older brother Gordon when he was 8. they both state in with Tom DeBlass’ academy. He used to train on and off, not really taking things seriously until he saw his brother build a successful grappling career. His training included Danaher methodology from the get-go, and he was beating adults at the age of 13 with ease. Nicky got so much into Jiu-Jitsu that he left school, ending up being homeschooled by John Danaher.

Nicky is also the youngest ADCC competitor, getting invited to participate in the Olympics of grappling at the age of 16. In terms of major titles, he won the ADCC West Coast trials in 2019 and was crowned Polaris champion in 2018 and 2019. He has notable victories over seasoned grapplers like PJ Barch, Dante Leon, Jamil Hill-Taylor, and JZ Calvacante to name a few.

“Nicky Ryan’s Wrestle Up Series” is a DVD instructional about sweeping by using wrestling moves, in combination with BJJ moves, or on their own. This is the very first Nicky Ryan DVD ever, and a perfect glimpse into the way he approaches BJJ, and his teaching methods.

As the smallest member of the DDS, and facing adult opponents in tournaments since his early teens, Ryan has a very distinct guard style, that he presents in this DVD. His take on sweeping is to use established moves and methods from wrestling, like arm drags, ko uchi gari, ankle picks, collar ties, body locks, etc. Instead of only relying on BJJ sweeps technique, this DVD will teach you how to blend wrestling moves that work from guard positions, and from your knees.

While the subject is complex, given the “marriage” of wrestling and BJJ moves, Nicky’s teaching methodology makes it easy to understand. As such it is applicable to everyone, from white to black belt. Nicky does a great job of putting things into perspective so that everyone can find things to learn.

“Nicky Ryan’s Wrestle Up Series” instructional is a three-part BJJ DVD, produced by BJJ Fanatics. It is a No-Gi instructional, and each of the three volumes lasts around 60 minutes. With Nicky being a native English speaker, and the sound quality of the highest level, there’s absolutely no difficulty understanding everything that he is saying.

In terms of the contents, Nicky does show a lot of things but goes over everything in as much detail as possible while staying on the subject. In other words, grapplers of all levels will benefit from this instructional. As usual, those with prior knowledge of stuff like single-leg takedowns and ankle picks (for example) will learn more than complete beginners.

Nicky Ryan starts his very first DVD instructional addressing leg orientation which is a great concept. He demonstrates how to act when in guard depending on how the opponent is placing and/or moving their legs. This is a fundamental concept that the entire “Wrestle Up Series” DVD is based upon.

There’s also a bit on pushing and pulling, a concept I think everyone from the DDS has explained in their instructionals. Seated guards are first up as a launching position of all attacks Nicky shows. It all starts with options when an opponent is standing, which revolve around a double Kouchi Gari, and a bunch of possible follow-ups if it fails. Those options include arm drags, low doubles, and single-leg takedowns, as ways to sweep a standing opponent and get on top.

There rea some back mount entries from Seated Guard as well. The volume ends with a few chapters on the crescent and high steps.

Part two once again starts with seated guards, this time against a kneeling opponent. From this height, Nicky Ryan teaches how to get the neck in order to use the front headlock position for sweeping or back takes.

Some of the things in this volume are snap downs, ankle picks, and a bunch of follow-up Bodylock, double and single leg finishes. I essence, Nicky does a great job connecting the attacks from the previous volume with this one. Whenever an opponent stands up to avoid his kneeling attacks, Nicky immediately switches gear and keeps going. That, I guess is the most important lesson in this instructional – not stopping when you’re looking to wrestle up from guard.

The final portions of the instructional address the overhook position, which seems to be making a comeback into Jiu-Jitsu these past couple of years. Nicky’s attacks of choice from there are Sumi Gaeshi-based overhead sweeps.

The final portion of this Nicky Ryan DVD addresses lying positions, or “supine guards” as he calls them. After resolving some common misconceptions about attacking off your back, Nicky goes into his wrestling moves to sweep people, starting with GSP’s famous double leg setup.

The De la Riva quickly becomes that position of choice in this volume. Ryan shows how to use it to get to the double leg using 2 on 1, knee sweeps, front pommels, and a bunch of other interesting setups. The Reverse de la Riva os of course, not far, opening up a whole new series of attacks, once again centered around the single and double leg takedown. To be honest, most of the takedown finishes are done from what wrestlers call “the low” position, which is how Nicky connected them to BJJ guards and made them work sweeps.

Nicky even covers a few ways to deal with the Knee On Belly position as he wraps up his “Wrestle Up Series” DVD instructional.

Considering this Nicky Ryan DVD’s technical aspects and quality of content, we come to an overall score for this instructional that I’ll deliberate in short below.

Needless to mention that this DVD is yet another pristine BJJ fanatics product. The sound and video quality are at high quality, as is the camera work. Absolutely no complaints in this department.

COntent-wise, Nicky Ryan delivers a lot on a subject that most grapplers are oblivious about. Wrestlers do not use guards, and BJJ athletes rarely connect takedowns and sweeps. Paradoxical, I know, but true nonetheless. The subject is spot on and will change many people’s approach to attacking with sweeps from guards.

As previously mentioned, everyone can learn from this DVD, as Nicky is truly a great teacher. In fact, I’d go as far as saying he explains and connects things a lot better than Gordon. A small remark in regard to the content would be that there are only three volumes of this DVD. That, however, is I think purely because we’re so used to the 4-volume BJJ DVD format in the last five years.

Another thing which is purely a personal view on things is that I, myself, prefer to sweep a bit more lazily from guards. Nicky’s “Wrestle Up” series will teach you how to sweep even wrestlers and Judokas, but it will mean you need to work for those sweeps. I guess Jiu-Jitsu as we know it is making us lazy, that’s why the ex-DDS guys and everyone with a high work rate easily dominates.

A great resource to open up plenty of opportunities on how to seep people from the guard. As this is a No-Gi DVD, it will work perfectly well in a Gi setting as well, making it truly universal. Oh, and every move shown in this Nicky Ryan DVD is 100% legal for everyone from white to black belt level.

“Nicky Ryan’s Wrestle Up Series” is the perfect way for you to start the new year. Be unorthodox, start exploring different grappling ways in which your BJJ guard can become dangerous, rather than just trying to wrap people up in their own Gi jackets.