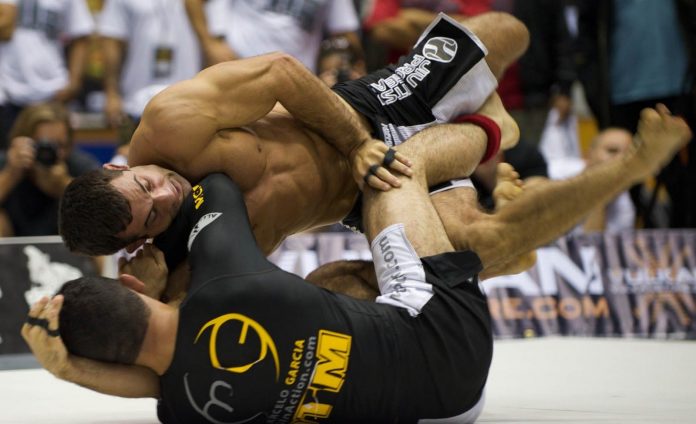 Have you ever tried to grapple with someone who has a strong wrestling background? If you have then you’ve probably noticed that BJJ sweeps seem to bounce off them like bullets off Ironman’s suit. Cheesy Marvel metaphors aside, sweeping wrestlers is a real pain. However, there is a way. Regardless of how great their base is, or how much pressure they can generate from the top, you can still send wrestlers flying around the training room. It won’t be easy, and it won’t be pretty but you have to learn it. Otherwise, when you meet a wrestler that knows BJJ in a tournament, you’ll discover a whole new world of pain.

The strategy for dealing with wrestlers is easy – do not let them pressure you. However, given their experience, and extreme tendency to stay on top, this might be harder than it sounds. To that extent, the closed guard is cool to relieve pressure, but you won’t sweep a wrestler from there. Given their immense base and posture, you won’t be able to look for submissions either. Instead, the one position that might offer hope of executing BJJ sweeps against wrestlers is the half guard. The reason behind this is very logical – why fight both their legs when you can isolate one and just deal with the remaining one?

So, all those people that train other types of grappling martial arts apart from BJJ have one thing in common – they like to be on top. Do not get me wrong, being on top is the desired outcome in Jiu-Jitsu as well. However, the guard game is so vast, that you can spend all your time working off your back and hunting for submissions. That said, when subs do not work, you’re only left with one option – sweep. And sweeping someone means you get on top. If you come to think about it, there’s not one bottom position that’ll earn you points in sports Jiu-JItsu. So, staying on top is key in BJJ too, just not as important as it is for wrestlers.

In Wrestling, the rules dictate that a match can be won by pinning someone to the ground, or by points. Since pinning means someone’s back is on the ground, wrestlers have it instilled in them to never let their backs touch the mats. That means they’ll do anything to stay on top. It also means their base is immense, and they might oftentimes give away a submission attempt but they’ll rarely succumb to BJJ sweeps. And this is the one key reason, apart from their immense top pressure, those high-level writers can toy with most BJJ guys/girls, even if they’re black belts.

The main problem isn’t hard to spot, it is just hard to solve – base. Wrestlers’ immense base means they stay on top constantly. At times, they might even do crazy acrobatics to keep their base. Throw in their explosive power and strength and you have a recipe for being extremely annoyed at your sweeping capabilities. Time to take a different approach, one that has been proven to help you sweep even the world-class wrestlers.

When it comes to completing BJJ sweeps against wrestlers, there’s a three-step formula. Of course, for it to work you need to be in the correct position in the first place. In our case, that’s the half guard. The first step when you get there and are looking for a sweep is to know what you actually need to think about when you’re looking to sweep. And the main thing you need to be thinking about is the wrestlers’ overhook, whether it is over your arm or over a leg. Since you can’t really deal with it easily, think about using it to aid your BJJ sweeps.

Next up, is what you actually want to do. Your only goal, before sweeping a wrestler, should be to get them on top of you. Of course, you’re not just going to pull them into a smash, but rather have a trap waiting. Whenever you pull wrestlers on top, they tend t follow, given their programming. This is what you use against them. With the correct half guard setups and follow up, once you get them on top of you, you can sweep in different directions.

However, the most important thing here, more important then what to do, is what you should never do. Never, ever even think about going for BJJ sweeps if a wrestler ahs ayn part of your body smashed, or under control. Any attempt on your part to pull them on will just result in more pressure and more smashing. Instead, make sure you get to a “position zero” where you’re safe to launch all your sweep attacks. Let’s look at this in-depth.

IN terms of which half guard to play, the knee shield, or any variation should be your first choice against a Wrestler. They’ll be looking to overhook something, either way, so you might just accept it and work from there. That said, there are a couple of BJJ sweeps from the knee shield half guard that is irreplaceable when it comes to sweeping strong and fast wrestlers.

First up, let’s talk about a situation in which the opponent had an overhook over your leg. Goal number one is always to prevent the smash. The best thing to do is to use a solid frame made up of a connected knee and elbow. Then it is time to bring your wrestler opponent forward, which is done by placing an underhook dee under their free leg. Form there you have options. You can get an underhook to play Coyote guard, you can go for deep half or simply, extend your legs and sweep with a pendulum style sweep. Personally I prefer a “coil” sweep from the underhook half guard.

Another scenario includes a wrestler having overhook control fo your ar, or a Whizzer, as they like to call it. In order to make sure you both kill the overhook and prevent D’arce choke attacks, you need to get a sneaky grip in. To do that, you get a writ grip on the overhook arm before you look to underhook their free leg yet again. You use that this is a common theme in all BJJ sweeps that work against wrestlers – get them to go forward. A simple hip shovel from there will get you a neat and quick sweep, settling you in top half guard.

Let’s make something painfully clear – sweeping wrestlers is never going to be easy. In many cases, they’ll try and counter everything you throw at them. However, if you set up your BJJ sweeps correctly, you will enjoy success. Moreover, working form the half guard means you have a safe spot to fall back to if your sweeps fail. That said, think about using the at wrestling base and love for overhooking against them, and keep puling wresters forward. At least if you want to end up being on top.