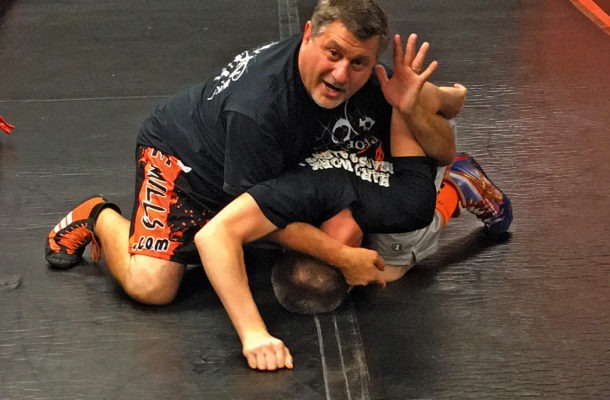 The Nelson hold is arguably the most famous pinning move in the history of wrestling moves. The standing full Nelson is something we’ve all tried to escape as a challenge when we were kids. Even today, it is a  powerful move if you know how to execute it, and the opponent doesn’t know what you’re doing. However, in Brazilian Jiu-Jitsu, the move is redundant, somewhat due to rules and somewhat due to its limited effectiveness. However, a version of this wrestling staple is not just useful for Jiu-Jitsu but offers one of the best control and transition points in the whole sport. What I’m talking about is the wrestling half Nelson.

I’ve claimed for a while now that in BJJ, we underuse massively the moves that wrestling has to offer. We’re so fixed on BJJ’s supremacy in ground fighting that we rarely look past wrestling takedown. Just an example, the front headlock is a wrestling position, and look at what Danaher has done with it. Eddie Bravo’s Twister is also a wrestling pin, AKA the wrestler’s guillotine. And this is just scraping the surface. Wrestling, regardless if it’s Greco Roman, freestyle or catch, has a lot to bring to the table. One such often overlooked move is the wrestling half Nelson. It offers a secure pit stop in a place where BJJ resorts to scrambles more often than not. If you truly want to be high level, you need control at all times, and the wrestling half Nelson is one great way of getting it.

The wrestling half Nelson is a move that acts as a pin, both standing and on the ground. It is simply a reduction compared to the full Nelson. By reduction, I mean instead of having two of your arms under the opponent’s armpits and behind their head, you have one. What you lose is the ability to hold someone in place forcefully. However, what you gain is mobility to distribute your weight, and attack from a few different angles without ever letting go of the grips. There is also a myriad of transitions you can go into the most dominating positions. Oh, and there are submissions, of course. And lots of ’em!

I the interest of full disclosure, there are actually 4 Nelson positions: the full, three quarter, half and quarter Nelson. All work in wrestling and all can be effective in BJJ. However, the half Nelson is the one variation of this move, that you can’t afford to not know if you train Jiu-Jitsu.

The half Nelson is fairly simple to set up. What you want to have for the “traditional” wrestling half Nelson is one of your arms under the opponent’s armpit, in a back-to-front direction. The goal is to then place your palm on the back of their neck/head. The best position for establishing this position is from the back, but you can also get it from side control, turtle, or even frontal positions. Once you get into it, the options are pretty much unlimited. Let’s take a look at some of them.

The Obvious Wrestling Half Nelson Options

The wrestling half Nelson does not require complex mechanics in order to work. Instead, it uses some of grappling’s most basic principles – posture control and leverage. What you achieve with the half Nelson is direct control over the opponent’s neck and head, and via that, indirect control over his posture. Being able to force the head down, or twist it in each direction means you can break and control posture at will. Furthermore, you have complete control over the near side arm (the one you have trapped), taking upper body mobility completely away. The best thing about the position is that it allows you to change the angles of attack significantly. Moreover, you have a free arm as well as both legs to attack, while the opponent can’t move into a good defensive position.

In terms obvious half Nelson options, you can pin an opponent just by establishing the control. You can also use it to transition to a bunch of great position, like side control, the back and/or mount. Also, from standing, you can use the wrestling half-Nelson to wrap up an opponent and take them to the ground very easy.

In terms of pinning with the half Nelson, the basics are the best. In wrestling, the referee position (very similar to the turtle) is the usual spot for hunting half Nelsons. The wrestling goal from here is to pin the opponent to the ground, belly down. In BJJ, you can also use the same move to force a turtled opponent to the ground, opening up very easy back attacks. Another great option is keeping the opponent in the turtle without an option to move. All you need to do is control the far hip with your free arm, and get put a foot on the near side leg. Your opponent’s turtle is not only static at this moment, but you can choose when, and in which direction you want to open it up.

Using the half-Nelson to get to side control also offers a great pin. The position of the arm means you can put pressure on the neck and immobilize the shoulder straight away.

From a transition standpoint, of course, the back is the preferred destination. After all, the position has you set up with an underhook already. The fact that you’re in control of the head and posture means you can get the other arm fairly easy. When you’re in turtle, both hooks are also very easy to establish. All you need to do is control the far hip, or arm, and pull the opponent towards you. Tilting the head a bit is going to ensure you’re’ successful.

You can also get the back from side control with a half Nelson in place. He, you’re going to use the pin from previously in order to be able to shift your hips to the other side and get a hook in. Form this point forward, you can get the back, or try to transition into the truck.

From the top, getting the wrestling half Nelson can be a bit difficult, especially with the Gi. The goal here is to get to the side of your opponent, most often with the help of an arm drag or a duck under. Once there, all you need to do is scoop the neck and you’re all set. Using the half Nelson control to get the fight to the ground could not be simpler.

Whenever you have a rear bodylock, you can think about the half nelson as an option. The valley drop is a great way to get your opponent to the ground. The trouble here is that it’s really easy for an opponent to get back up. this is the precise moment where you slap on a half Nelson. the result is no way to get back up, plus complete control and attacking options for you.

Not So Obvious Moves

There are some moves that wrestling doesn’t have in its arsenal, simply because they don’t fit the ruleset. However, in BJJ, the work much better than simply pinning someone to the ground, or transitioning. Moreover, in Gi Jiu-Jitsu, lapels open up so many options from the wrestling half Nelson that you’re going to wonder why you haven’t been using it more.

One great option is getting the back and finishing from there. The good thing about it is that you can skip all the back control grip fighting. Having the half Nelson in means you already have half the choke ready. All you need to do is grab the lapel, like for a bow and arrow choke. From there, think more like a loop choke finish than a rear naked. Simply touch your half Nelson palm to your opposite shoulder and you’ll get a fast tap.

There’s also a great Kimura available. From turtle, you nee a far side half Nelson. Use your body weight and twist their head to pull the opponent down to side control. Once they’re flat on the ground, simply take a step into North-South and you have a Kimura ready and waiting for you.

Remember to give the wrestling half Nelson some time to work. Once you get the control and entries down, have fun and experiment with it. It is going to offer you a lot of options, regardless of the kind of grappling game you want to play.